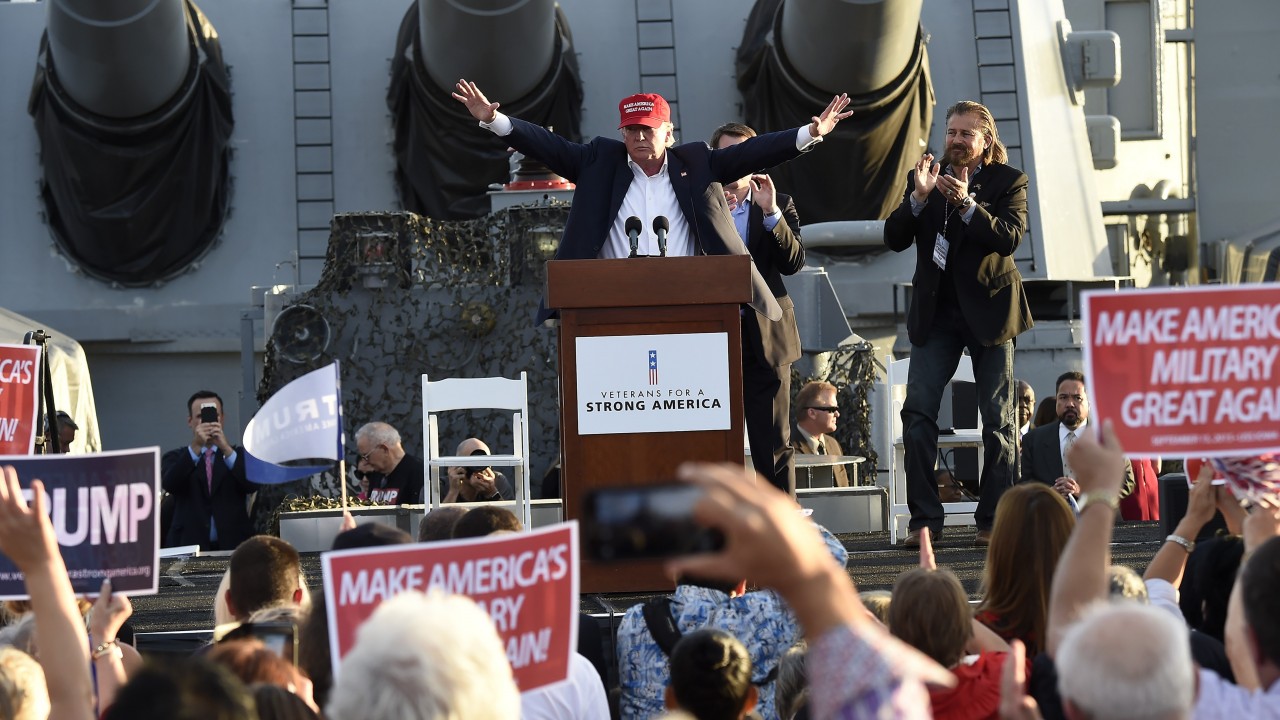 The Growth of the Military-Industrial Complex Under Trump

President Dwight Eisenhower’s foreign policy was an ode to interventionism. Eisenhower began the escalation of U.S. presence in Vietnam, toppled governments from Iran to Guatemala to Thailand and elsewhere, extending U.S. military involvement across multiple continents.

Yet Eisenhower warned, “we must guard against the acquisition of unwarranted influence, whether sought or unsought, by the military-industrial complex. The potential for the disastrous rise of misplaced power exists and will persist.” If only Eisenhower had not been too late; the armaments industry had already secured considerable influence for decades to come.

President Trump’s administration has ushered in explosive growth in the military industrial complex. Trump’s Secretaries of Defense, Homeland Security and Education have ties to defense contractors, as do some of his closest advisors. The administration’s ties to the armaments industry will likely lessen the effectiveness and accountability of the U.S. military. However, the Trump administration is not the first to have potential conflicts of interest with defense contractors, meaning that there are developed methods for monitoring and limiting such conflicts.

Trump’s cabinet has significant financial ties to a slew of defense contractors. Secretary of Defense Jim Mattis served as one of thirteen directors of the multibillion dollar and fourth largest defense contractor General Dynamics, earning more than ten billion in government contracts annually. Mattis also served on the board of Theranos (making a six figure salary), a biotech company that came under fire in July 2016 after its founder, Elizabeth Holmes, was barred from operating labs due to blood testing practices putting patients at undue risks. Moreover, Mattis attempted to ensure that Theranos received a defense contract in 2011 to do blood tests in Iraq and Afghanistan, potentially putting troops at risk, although it is unclear if the contract was ultimately awarded. Mattis also received tens of thousands of dollars from Northrop Grumman, the fifth largest defense contractor, for speaking engagements.

Secretary of Homeland Security John Kelly potentially violated federal law by not disclosing leadership positions in three defense contractors (Spectrum Group, Michael Baker International, and Sallyport Global) to the Senate during his confirmation hearing. Each of these companies has received hundred of millions of dollars from the federal government in contracts. Kelly did disclose working for several other defense contractors, including DynCorp International and Flatter & Associates, as well as Beacon Global Strategies, which does consulting for the defense industry. Kelly was paid upward of tens of thousands of dollars (in some cases hundreds) for these positions.

Secretary of Education Betsy DeVos is indirectly connected to the defense industry through her brother, Erik Prince, the founder of the mercenary contractor Blackwater, which was heavily employed by the Defense Department during the Iraq War. Prince, currently the head of the air-based defense contractor Frontier Services Group, which sells armaments around the world, has been personally advising Trump since after the campaign. After donating hundreds of thousands of dollars to Trump’s campaign, Prince advised the transition team on defense and intelligence matters and participated in the vetting of candidates for the Departments of Defense and State.

Besides Prince, another Trump advisor with ties to the defense industry, Peter Thiel, has received insider access to the decision making process. Thiel, a Silicon Valley venture capitalist who co-founded PayPal and sits on Facebook’s board of directors, has been a principle Trump adviser after the election and a prominent backer beforehand. He donated $1.25 million to pro-Trump super Pacs in October 2016. Thiel spoke in favor of Trump’s candidacy at the Republican National Convention, and repeatedly promoted Trump through the media before the election. Thiel is also the co-founder of the data mining company Palantir, which has received contracts from the Pentagon, the CIA, the Army, and other national security agencies amounting to hundreds of millions of dollars. Thiel has further connections still to military contractors, including Helion Energy (in which his venture-capital firm Mithril Capital Management has a stake), which has received contracts from the Defense Department, and Qadium, which has garnered millions in DoD contracts.

Thiel has exercised influence over the Trump administration in several ways. First, Thiel served as a member of the transition’s Executive Committee, assisting in setting up a meeting between Trump and major tech CEOs and taking the lead on vetting candidates to work in the government including antitrust regulators. Second, Thiel’s allies were empowered within the transition to select government officials. Trae Stephens, a former Palantir employee, was picked to head the transition at the Department of Defense, while Marc Woolway, Thiel’s associate from PayPal, helped vet candidates at the Treasury Department and Kevin Harrington (who worked with Thiel at his hedge fund Clarium Capital Management) assisted in selecting candidates at the Commerce Department.

Financial ties between Trump’s appointees and advisors and the defense industry may undermine the effectiveness of the U.S. military. Members of the Trump administration with ties to the largest defense contractors are unlikely to look upon their former employers or financiers with the necessary detail or skepticism when awarding billions of dollars in defense contracts. Defense Secretary Mattis demonstrated this when he suggested that his former employer Theranos receive contracts in the Iraq and Afghanistan wars only five years before the company was shut down for malpractice.

Although the current administration has substantial financial ties to the defense industry, it could be said that all modern administrations have shown comparable ties. Charles E. Wilson, Eisenhower’s Secretary of Defense, was an executive at a defense contractor, General Motors, prior to his appointment. More recently, Obama’s first undersecretary of Defense, William Lynn, was a senior Vice President at Raytheon, a major defense contractor, while Obama’s last Secretary of Defense, Ash Carter, also had serious ties to defense contractors. During President Obama’s terms he spent trillions of dollars on defense and there were thousands of lobbyists for the defense industry in Washington clamoring for more funds, as was the case under George W. Bush, Bill Clinton, and other modern presidents.

However, regardless of prior government ties to the defense industry, the Trump administration is uniquely situated to worsen the military-industrial complex through increased defense spending and cavalier treatment of conflicts of interest. President Trump is poised to preside over a massive surge in defense spending: Trump’s budget proposal will reportedly increase military spending by ten percent ($54 billion) and Trump has stated that increased military spending is more important than a balanced budget. As a result, the Trump administration will determine how billions of dollars in new military contracts are awarded, meaning that the administration’s ties to the defense industry could sway which corporations receive contracts. Furthermore, Trump advisers with ownership stakes in defense contractors can act as lobbyists in chief, using their direct line to the White House to garner a slice of the increased military budget. In addition, the Trump administration may exacerbate the military industrial complex due to its lack of concern for conflicts of interest. Unlike previous administrations’ picks, Trump’s nominees (who are the richest in history, on average) have repeatedly failed to disclose ties to the defense industry, meaning that their bias toward certain corporations may be secret. Trump has yet to name hundreds of undersecretaries, deputies, and lower level positions throughout defense related federal agencies, signifying that conflicts of interests may further proliferate.

Despite the potential pitfalls of awarding contracts to the defense industry, competition between corporations can yield innovative solutions. Competition within the private defense sector improves U.S. security by incentivizing firms to invest in research and development in order to win contracts over less innovative firms. Yet the private sector competition only increases security to a certain point. The U.S. already spends nearly $300 billion annually on defense contracts, and the Pentagon assessed that there is more than $100 billion in wasteful spending within the Department of Defense today. A large increase in defense spending is likely to be wasteful, given that the defense industry is already swimming in funding, and the increase certainly will not create newfound competition and innovation.

The biggest danger with respect to the growth of the military-industrial complex under Trump is the least predictable: will the defense industry play an expanded role in interventionism abroad? Reliance on defense contractors contributed to adventurism abroad under Obama: his administration flew and deployed bombs from Raytheon-built drones over Pakistan, Iraq, Syria and Yemen, sold privately made cluster bombs to Saudi Arabia and others, and surveilled individuals from countries all over the world through a myriad of private contractors. It only remains to be seen where the Trump administration’s ties to the armaments industry will lead his foreign policy. Many in the Trump administration, including figures like Defense Secretary Mattis, have suggested escalating conflict with Iran, perhaps to the level of war. Indeed, before his tenure ended former National Security Advisor Michael Flynn moved the U.S. to the brink of war with Iran when he said that Iran was “officially on notice.” Defense contractors are sure to fatten themselves through Trump’s increase in military spending, but it remains unclear if this will be sufficient to sate their appetite. If not, to what lengths will the defense industry go to find new sustenance, and will the Trump administration have the independence to say no?