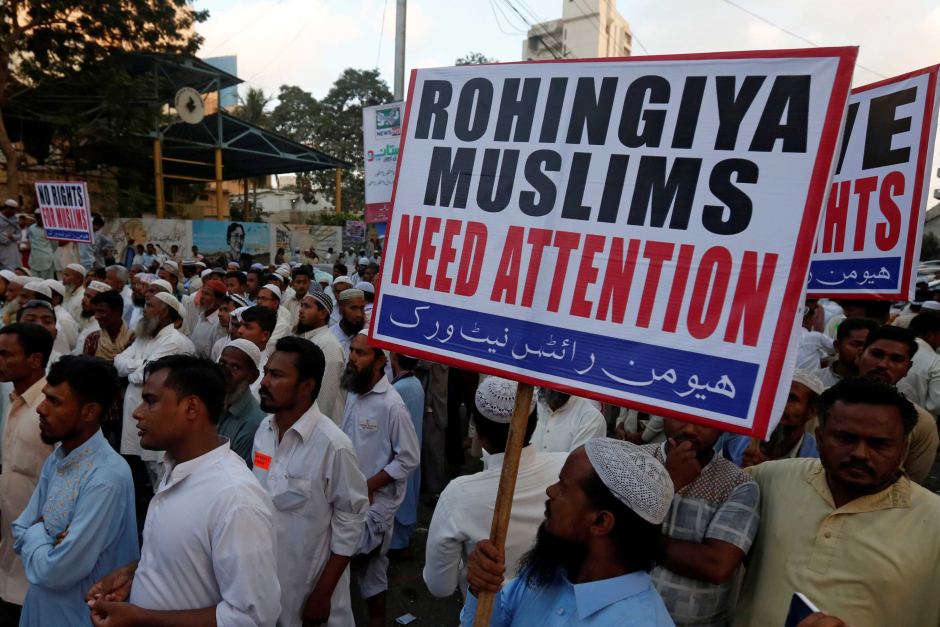 Rohingya with No Rescue

Ambia Khatun rushed her two children out of her burning house on the early morning of November 23. Unable to escape in time, her husband lay with the burning remnants of their villages, killed once the Myanmar army started firing. 37-year-old Khatun is one of the 1.3 Million Rohingya Muslims living in Myanmar’s Rakhine State, widely accepted to be the world’s most persecuted community and now in their final stages of ethnic cleansing.

After militant elements within the Rohingya populace murdered nine police officers at a police border post on the Myanmar and Bangladesh border on October 2016, the Rohingya were subjected to brutal crackdowns by the Myanmar Security Forces. Unwarranted attacks on innocent Rohingya civilians, in pursuit of alleged terrorists, led to the massacre of untold hundreds, while 87,000 Rohingya were subsequently displaced as their villages were burned wholesale. As of February 2014, 1.33 million Rohingya lived in Myanmar, while millions have adopted refugee status abroad.

The Rohingya have long been chained to a system of injustices dealt out by the Burmese government. Due to confusion over their ethnic origins and Buddhist nationalist fears of integrating Islam into Myanmar’s polity, Rohingya are considered “illegal immigrants” and are thus ultimately a stateless people. Ever since Myanmar’s independence from British colonial rule in 1948, the Rohingya have been subject to not only political and religious discrimination, but grave humanitarian violations constituting crimes against humanity, ethnic cleansing, and, lately, genocide.

The Rohingya as an ethnic group have roots in the Arakan Kingdom, native to Myanmar. However, an influx of Rohingya laborers from Bangladesh under British Imperial Rule gave the new Burmese Military dictatorship a concern with their nation’s new ethnic make-up. The Union Citizenship Act passed with Burmese independence in 1947, set the standard for accountability of the Rohingya as this granted citizenship to all “indigenous races of Burma,” specifically excluding the Rohingya.

Civil War, turmoil, and conflict grew out of Myanmar’s British independence, until General Ne Win militarily instituted an authoritarian government and banned all opposition parties in 1962. In 1974, General Win required National Registration Cards for Burmese citizens, while Rohingyas were instead given Foreign Registration Cards. The Foreign Registration Cards are not recognized by schools or employers, limiting job and educational opportunities, in addition to barring them from civil services. The years of missed schooling, in addition to the desolate living conditions, only further highlight how destined for destruction the Myanmar Security Forces deemed the Rohingya. By 1982, General Win prohibited Rohingya from citizenship, finally condemning them to their current position as “stateless.”

Today, most Rohingya in Myanmar are cramped into Internally Displaced Person (IDP) camps, hidden from the world, and entirely administered by Myanmar security forces. For decades, squalid living conditions, extrajudicial executions, mass shootings, arbitrary detention, forced labor, gang-rape, torture, sexual violence, and destruction of property were all part of a calculated policy of annihilation for the Rohingya minority. The purpose of the exclusion and neglect of the Rohingya is to slowly bring about their elimination from Myanmar. Over the years, crackdowns have forced Rohingya refugees to flee to neighboring countries. Bangladesh now holds between 300,000 and 500,000 Rohingya after revolts in 2012. As of February 9, 2017, the UN has reported more than one thousand Rohingya Muslims have been killed as part of the crackdown following October’s attack. The Burmese government has denied almost all allegations of human rights abuses in Rakhine, including gang rapes and mass killings of Rohingya Muslims, and says the operation was a lawful counter-insurgency campaign.

Shockingly at the core of this atrocity is the Burmese complicity in Rohingya oppression. On February 9, 2017, a Malaysian ship carrying 2,300 tons of aid for tens of thousands of Rohingya Muslims arrived in Myanmar and was met by Buddhist protesters, waving national flags and signs reading “No Rohingya.” However, Myanmar’s denial of Rohingya citizenship isn’t only limited to Myanmar’s 90% Buddhist majority.

The 696 Movement is a Buddhist nationalist movement, at the core of Myanmar’s discrimination and demonization of their Muslim Rohingya neighbors. As of 2011, this political network actualized under “696”—each digit said by monks to symbolize a virtue of Buddha—rejecting a multicultural identity for Myanmar, threatening Burmese stability over Anti-Islam sentiments. In March 2013, for example, Buddhist monks incited rioters, killing 43 Muslims in Central Burma, showing 696 gaining ground.

So far, State Counsellor Aung San Suu Kyi, a figure of democratic struggle and a Nobel Laureate, has chosen to neglect the Rohingya, even with more pressing skepticism coming from neighboring countries, human rights organizations and even fellow Nobel Peace Laureates. Aung San simply chooses not to risk her Buddhist popular support base, after decades of house-arrest, by neglecting the Rohingya question.

Additionally, Aung San’s personal predicament also directly prevents her from either actualizing or even voicing support for the Rohingya. The foreign status of her husband and child prevent her from running as President, limiting her to Foreign Minister and State Councillor, which doesn’t grant her authority over security forces.

In response to the police crackdowns in December 2016, the Prime Minister of Malaysia took to the streets of Kuala Lumpur with Rohingya protesters, calling for a stop to the genocide. Still, Aung San insists on keeping the Rohingya situation as “off-limits” in bilateral dealings between Myanmar and Malaysia. Malaysia holds over 56,000 Rohingya following 2012, while Bangladesh holds around half a million, Saudi Arabia has 400,000, and Pakistan has 200,000.

As the Rohingya refugee influx reaches unprecedented highs across a spread of different neighboring countries, the new surges call for fully-concerted efforts.

Spontaneous delegations need to be replaced by a conscientious collaborative effort between countries. Too much reliance on countries like Bangladesh has led Bangladesh to not only deny Rohingya refugees immediately at shore, but denying access to humanitarian aid. Bangladesh’s recent faulty proposal to relocate the Rohingya to a remote island known for its risk of flooding, Thengar Char, also sheds light on the need for more solidarity among nations. Similarly, the same Malaysian ship carrying 2,300 tons of aid, set all those goods adrift once denied at Myanmar’s port.

For foreign intervention to be effective, the institutions within Myanmar can no longer bar Rohingya from receiving aid or media coverage.

The Association of Southeast Asian Nations (ASEAN), including Myanmar, Malaysia, Indonesia and Thailand, has been silent on the Rohingya plight in abiding by its fundamental principle of noninterference in the internal affairs of member states. The escalation of violence is putting pressure on ASEAN to act by members such as Thailand, as unprecedented rates of violence in Rakhine continue.

Lecturer for Introductory Burmese at UC Berkeley, Kenneth Wong, who was born and raised in Myanmar, sees hope in the Rohingya plight but outlines a current disadvantage. “The Obama Administration has always held the Rohingya’s interests at heart, pressuring both Aung San and former President Thein Sein to cease discrimination of Rohingya.” With the Trump administration’s priorities in the region largely unknown, the Rohingya may not be able to count on even limited support from the US.

The UN High Commissioner of Refugees recently sent a four-man team to investigate following the police border post attacks. A UN Flash Report giving deeper glimpses at the damage incurred among the Rohingya exposes even more disturbing human rights violations, such as enforced child labor and brutal exhibitionist killings. However, the UN must do more than just write reports to fix this crisis.

Within Myanmar, all the international attention has urged the Burmese security forces to arrest and prosecute some of its own servicemen. Among neighboring countries, support voiced is just another drop in the bucket. A collaborative international effort reprimanding of Myanmar Government and stable aid to refugees is imminent. However, true progress in the treatment of the Rohingya will start at building solidarity across religious/ethnic lines. Only through mitigating ties between Buddhist nationalism and Militarism will real progress be made.
Myanmar’s state-sponsored inter-sectarian violence and low human rights standards on its own Rohingya populace touches upon the age-old postcolonial theme of the recognition of the state to a majority, becoming grounds to take away rights from the minority.

Ambia Khatun and her family’s story is yet to be written. But it will be written as part of the larger Rohingya narrative, whose collective ending has to date been anything but happy.