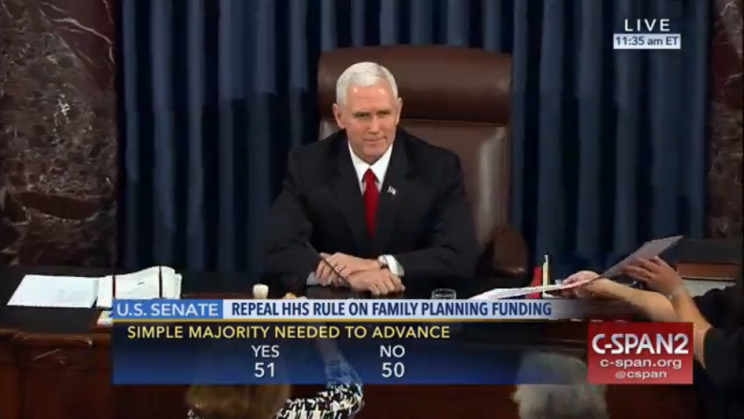 Unethical Yet Unsurprising: The GOP’s Latest Blow to Planned Parenthood

Were you to search for online testimonials of people who have received services from Planned Parenthood, you would find results overwhelmingly inspirational and hopeful, ranging from stories of women from strict religious families receiving birth control pills and becoming the first in their family to not become a teenage mother to college students getting STI tests done in a safe, supportive environment after being sexually assaulted. The need for Planned Parenthood is evident more and more, as studies show that simply the existence of Planned Parenthood in states is associated with reduced teen pregnancy and rates of sexually transmitted diseases.

The Senate just spit in the face of all that progress this week when it voted to allow states the option to restrict federal funding from benefiting Planned Parenthood or other abortion providers. The kicker, of course, is that federal funding, as of the Hyde Amendment’s institution in 1973, already cannot be used to finance abortions. What this means is that money like that designated under Title X, specifically designed to provide individuals with comprehensive family planning and related preventive services, will not be able to support far-reaching and established reproductive and OB/GYN healthcare providers like Planned Parenthood, severely limiting their ability to aid the 2.5 million people who use their services annually.

The argument for states’ rights, or giving states the options to choose how they deal with organizations that provide the controversial but legalized practice of abortion, has already reared its ugly head in the past. While regionally support for abortion and organizations like Planned Parenthood may vary, it has been scientifically shown that it is beneficial to a state’s population from a public health perspective to have more accessible Planned Parenthood clinics. States that choose to restrict Planned Parenthood’s services (and that are often Republican-controlled) experience real consequences soon after, such as an increasing number of births among low-income women in Texas.

This vote displays a blatant disregard for not only the health and liberties of Americans, especially women, but for the most prized American value of all: democracy. According to a poll conducted in January of this year, 62% of Americans oppose cutting federal funding to Planned Parenthood. According to the Pew Research Center, a majority of Americans — specifically 57% — actually think abortion itself should be legal in all or most cases. An even more disheartening indication of how this decision was forced upon the American people despite our representative democracy is the way the vote itself was conducted. The GOP currently holds a 52-48 majority in the Senate but found itself at an impasse when Republican Senators Susan Collins of Maine and Lisa Murkowski of Alaska defected to the unified Democratic opposition. With a tie-breaking vote by Vice President Mike Pence, a long-standing opponent of abortion, Republicans narrowly passed the bill.

This forceful way of accomplishing policy objectives, as well as the apathy toward underprivileged people’s access to healthcare, is illustrative of this new era of the GOP under Trump. This bill’s passage comes on the heels of another blow to abortion and family planning worldwide: Trump’s reinstatement and expansion of a Reagan-era ‘gag order’ in late January essentially forced organizations that operate internationally to choose between U.S. monetary grants or any sort of involvement with (even recommendation of) abortion, reducing family planning options and restricting organizations’ functions on a global scale, simply based on Trump and his (mostly male, white, Christian, and otherwise elite) cohort’s personal views on abortion.

When President Trump inevitably signs this bill into law, I hope that, besides the other things no doubt weighing on his mind like the impending FBI investigation or Republicans’ failure to repeal Obamacare, he takes a moment to appreciate the damage he’s doing to American democracy and public health. Perhaps this week wasn’t a total bust for the White House after all.