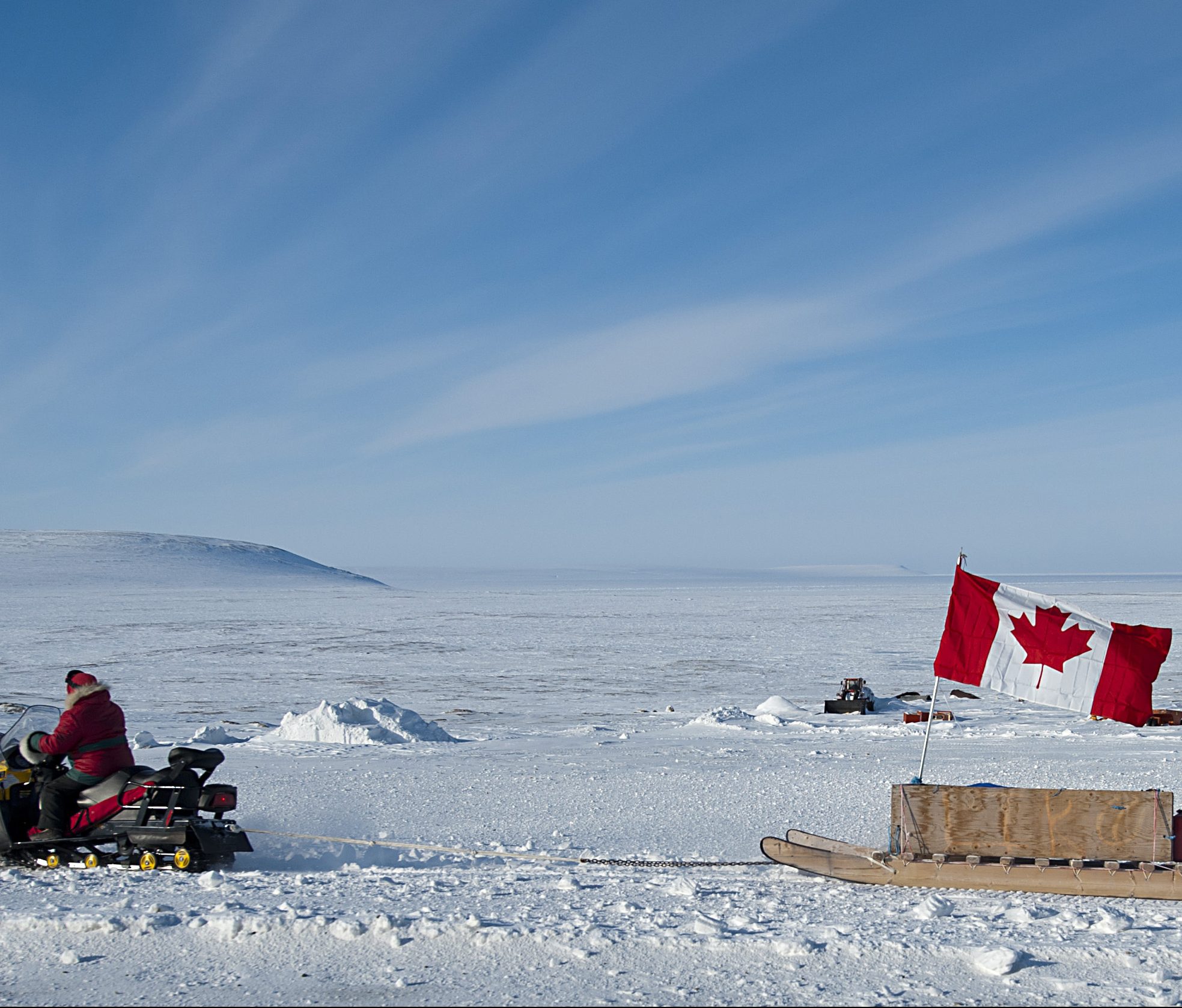 It’s 1984. Cold War animosity is back to normal and the U.S.S.R has announced its boycott of the Los Angeles Summer Olympics. Ronald Reagan and his promise to fight the “evil empire” have succeeded in one of the greatest electoral landslides in U.S history. Elsewhere in the world, conflict is brewing. In an unexpected move, Denmark’s Minister for Greenland takes a trip to the disputed Hans Island, leaving a bottle of Danish brandy and a note reading “Welcome to Denmark” underneath a large flag. Canada, angered by this violation of its sovereignty, quickly dispatches Canadian marines to enforce its claim. Armed with bottles of Canadian Club, the Canadian forces successfully retake the uninhabited island, starting the Cold War’s most laughable conflict: the Whiskey War.

Despite this silly history, Canada takes its position in the Arctic region very seriously. Though often considered in the United States as a peaceful neighbor, Canada has been quite aggressive in the Arctic, not hesitating to make and enforce its claims in a region it sees as integral to its interests. With the resurgence of an aggressive Russia and the opening of vast energy resources underneath the polar ice, Canada’s Arctic policy has become key to its military and energy security. As the Arctic changes environmentally and politically, Canada’s stake in the region will only increase, potentially bringing back decades-old animosities to an even colder war.

With global temperatures increasing at unprecedented rates, the Arctic may soon well become a new frontier for human development. As the glaciers and polar ice of the North begin to recede, humans will finally be able to exploit the polar waters rich in minerals, oil, and natural gas at a fraction of the cost of Arctic exploration today. During the summer, the ice may even recede enough to allow for transport through the Northwest Passage, which would be revolutionary for global shipping. Crucially, the Arctic, unlike its Southern counterpart in Antarctica, has few protections for the environment and fewer from the predations of nearby states. Various territorial claims in the region are explicitly validated by the U.N. Convention on the Law of the Sea, with each state having the right to an exclusive economic zone (EEZ) up to 200 nautical miles from its coast and the right to request an extension of control into contested waters farther North. What little Arctic regulation there is comes from the Arctic Council, an organization that comprises the eight states with territorial claims: Canada, Denmark, Finland, Iceland, Norway, Russia, Sweden, and the United States. Created in 1996 with the expressed goal of promoting cooperation for sustainable development and environmental protection, the Arctic council has worked at a glacial pace, having only successfully negotiated one treaty  — the Arctic Search and Rescue Agreement — in the last 20 years. With no international body exerting meaningful influence on the region, control and regulation has been left for the states to work out themselves. Unsurprisingly, Canada is at the fore.

Canada’s Arctic policy is laid out in the government document Canada’s Northern Strategy: Our North, Our Heritage, Our Future which proclaims: “Canada is a Northern nation. The North is a fundamental part of our heritage and our national identity, and it is vital to our future.” This strategy defines the four pillars underlying the Northern Strategy and the order in which they are listed is telling. First and foremost is exercising Canadian sovereignty in the Arctic. Next is economic and social development, followed by environmental protection. Unsurprisingly, the pillar that deals with indigenous peoples, namely improving and devolving Northern government, comes last in the Northern Strategy, which was ironically published by the Minister of Indian Affairs. Given the country’s poor track record on native relations and its terrible recent environmental policy, all those words after “sovereignty” should be taken with a grain of salt. These clauses are secondary in importance, if not largely meaningless efforts to satisfy potential critics. The primary concern, now as in 1950, is Canada’s claims to Arctic sovereignty.

With America’s allies still reeling in the wake of the vote for Donald Trump and his “America First” foreign policy, it may seem surprising that America’s peaceful Northern neighbor intervened there first. In 2007, Conservative prime minister Stephen Harper put the rubber-stamp of approval on the Canada First Defence Strategy. Ironically arguing that Canada’s right to its Arctic territory was justified by the presence of indigenous people since “time immemorial,” Harper increased funding for new military vessels, better naval infrastructure, and the expansion of the Canadian Rangers. This, the government argued, would give the government a much greater ability to monitor and protect its sovereign territory from any unforeseen threats. This may seem a bit odd given that all other Arctic nations, except for Russia, are members of NATO, the European Union, or both. Furthermore, in 2007, the United States was bogged down in two Middle Eastern Wars and Russia had yet to begin its aggressive military resurgence. The other countries, all Scandinavian, are not even a third of Canada’s size, and are entirely non-threatening to its claims.

However, the military buildup begins to make sense in the context of Canada’s claims outside of its internationally-mandated EEZ — conspicuously, Canada’s continental shelf extension request covers the entire area of the deepest oil-filled basin in the region. With access to such a large, untapped oil field, Canada’s energy security would be guaranteed in an increasingly insecure world. But to many environmentally-minded observers, energy security is just another way of saying fossil-fuel dependence.

Countries across the world are adapting to the changing energy landscape as Middle Eastern oil yields begin to decline and new technologies like fracking unlock reserves in other countries such as the U.S. and Russia. Unfortunately for environmentalists, these changes are often qualitative, not quantitative; rather than reducing oil and natural gas consumption as scientists would hope, many nations are now seeking new supply sources for the future. If climate-change armageddon is quickly coming upon us, it may seem weird that high development countries like Canada would be willing to risk destruction by continuing to use fossil fuels. The reason why countries have yet to move away from fossil fuels is simple: fossil fuels are cheap, easy to transports, and versatile while renewable resources are diffuse, expensive to harness, and limited in capability. Fossil fuels are here to stay, and the game, much like in the 20th century, is to guarantee a steady supply for the state. For Canada, securing the Arctic oil fields does indeed mean continued fossil fuel dependence, but it also means that Canada will have the future energy it needs for its citizens and businesses without having to rely on dwindling Middle Eastern oil or insecure Russian natural gas.

Although Canada’s host of icebreakers and Arctic commandos is unmatched by the other players, it still stands in the face of two much larger powers, Russia and the United States. While war to resolve U.S.-Canada border disputes is entirely unthinkable, the same cannot be said for Russia. In recent years, coinciding with expansion elsewhere in the world, Russia has progressively militarized its presence in the region. Beginning in 2007 with a controversial flag planted at the North Pole, Russia has continued to take actions that further destabilize what is becoming an increasingly tenuous East-West balance. New naval and air bases across the Northern expanse of the enormous country have vastly increased the range and capabilities of Russian Arctic operations, allowing Russia to launch provocative shows of force, as in 2015 when ten Russian warships toured the disputed border with Norway. Russian resurgence, as in Ukraine and elsewhere, is the greatest threat to Arctic stability.

The election of Justin Trudeau in 2015 has led to little change in Canadian Arctic policy, which has been left frozen in place by the rising cold war with Russia. As NATO’s greatest Arctic member, Canada is both the most capable of stopping Russian movements and the most vulnerable to any Russian aggression. With that threat and the uncertainty surrounding the future relationship between the Trump presidency, NATO, and Russia, Canada is no position to do anything but fortify its current policy. In the short-term, the combined Russian and Canadian military buildups will balance political and military power in the region and provide much-needed stability. But in the long-term the new cold war will, much like the original, stymie any sort of international climate agreement on the Arctic. With relations in the Arctic cooling, the war between man and climate change will only get warmer and warmer, and the environment will be the ultimate casualty.