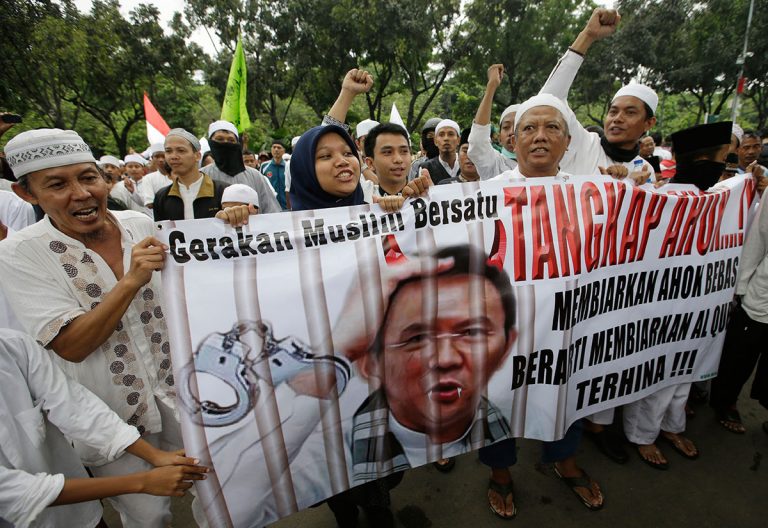 Indonesia in the Democratic Recession

On February 15th, millions of Jakarta residents went to vote in their third gubernatorial election since democracy took hold. More than a simple exercise of voting rights, this election represents a referendum on the direction of Indonesian democracy. The campaign brought to light some of the issues of race and religion currently plaguing the fledgling democracy, and has made clear the stark divisions within Indonesian society. These issues lead to questions about the nature of Indonesian democracy, and whether or not it has brought what it promised. With countries across the world, and especially in the West, turning their backs on liberal democracy, this election may be a turning point for Indonesia, as pluralism and Islamic nationalism face off.

The Jakarta election was the first battle in what many suspect will be a long war. Incumbent Basuki Purnama, affectionately known as Ahok, faced off against two powerful challengers, Agus Yudhoyono and Anies Baswedan. Though up for reelection, Ahok was not actually elected as governor in 2012; he had been Joko Widodo’s deputy governor, and acceded to the position when Widodo became president in 2014. It was the first time an Indonesian of Chinese descent had risen to such a high post in the government, and the first time for a Christian as well. Historically, Indonesians of Chinese descent (around 3-4% of the population) have been the targets of discrimination and violence on account of resentment against their extensive economic power. Christians (around 10% of the population), though not materially advantaged like Chinese Indonesians, have faced similar treatment in the majority muslim nation, mostly at the hands of fundamentalist groups.

But Ahok’s popularity flew in the face of such discrimination, with most Jakartans approving of his first three years in office, especially the young and the middle class. He is considered clean, honest, and effective, and is strongly supportive of democracy. In 2014, when Gerindra, his party, rammed legislation through parliament that abolished direct elections of provincial governors, mayors, and district chiefs, Ahok resigned in disgust. In 2016, when he announced his campaign, he declared himself an independent running against the corrupt national parties before later accepting coalition support.

One of Ahok’s challengers, Dr. Anies Baswedan, holds similar qualifications. An academic educated in the United States, Baswedan has been a voice for democracy since before the fall of former dictator Suharto, when he was organizing student movements against the regime. A supporter of Joko Widodo in the 2014 presidential campaign, Baswedan was appointed as national education minister before being sacked last July, supposedly because of presidential ambitions. He is supported by Ahok’s old party, Gerindra. Ahok’s other challenger, Agus Yudhoyono, is not so well viewed. Yudhoyono is the son of the popular democratic president Susilo Yudhoyono, whose term ran from 2004 to 2014. Agus resigned from the military after serving for 16 years, to run for elected office. Like his father, Agus is closely connected to both the military establishment and the national parties, like his own centrist Democratic party. His sole qualification for governance, in the eyes of many Indonesians, is his membership of a political dynasty, which aims to send him far.

The problem with the election was not so much the identity of the politicians at hand,  but rather the tactics and rhetoric they used in attempts to garner support and votes. Baswedan and Agus, both muslims, were quick to capitalize on anti-Christian and anti-Chinese feelings in the Indonesian muslim population of Jakarta, which represents about 85% of the city. In the process, hardline Islamic groups have come out of the woodwork on the fringes of society into mainstream discussion. The popularity of their discriminatory views alone speaks very poorly for pluralism. That discrimination is an essential pillar of support for two mainstream candidates is even worse. As this election makes clear, Indonesian pluralism remains new, fragile, and prone to backsliding.

During the second half of the Cold War, Indonesia was ruled by strongman dictator and American ally Muhammad Suharto. Although corrupt and abusive, his regime oversaw rapid economic growth throughout the 1970s and 80s, and was generally popular with the people. When the Cold War ended and the Asian financial crisis hit in 1995, however, this base of support gave way to a fast-growing opposition. Indonesians, previously willing to sacrifice their liberties for the promise of economic growth, no longer saw reason to support a regime marred by corruption, poor economic planning, and human rights abuses. If the regime could not deliver, then the regime could be replaced. The movement for democracy swept across Indonesia, and by the end of 1998, Suharto had resigned, leaving an unelected caretaker regime to manage transition. The caretakers, true to their role, presided over a period of massive change between 1998 and 2004 and created the institutional basis for the first democratic elections in 2004.

Although democratic transition came quickly, the record of democracy has been spotty. The Democracy Index currently rates Indonesia as a flawed democracy, with a score of 6.97, which places it in 48th place, between Bulgaria and Argentina. The list of problems is extensive. Corruption, though reduced, still pervades Indonesian society. Political participation is low, and declining, while support for the military, a pillar of the authoritarian regime, increases. Economic growth, though substantial, has not been enough to help the 28 million Indonesians still in poverty.  Most importantly, however, many Indonesians feel democracy has failed to deliver on its promises.

Many Indonesians hoped that democracy would be the much-needed solution for many of their problems. They believed that the transition to a more transparent and open political system would result in progress on all fronts, from human rights to economic growth to corruption. This naivete was short-lived: one scholar found that even during the “transition period from the authoritarian regime of Suharto to consolidated democracy, many people have been disappointed with the political, economic and security situation in the country since the fall of Suharto.” It became clear that democracy was not the panacea many had hoped for. Thirteen years later, progress has been limited, and there has even been some backsliding.

The disappointed attitude of many Indonesians towards democracy is both a failure of democracy and a threat to the institution itself. When a regime fails to deliver, people may look elsewhere, as we have seen with the rise of nationalist, populist, and semi-authoritarian leaders elsewhere in the world. These leaders peddle a promise of economic growth and national empowerment that many find highly seductive, even if it comes at the cost of individual rights or democracy. In Indonesia, this populism has taken the form of Islamic nationalism, and its effects are being seen right now, as Ahok battles to keep his governorship.

Ahok may have shot himself in the foot last year when he said people were misrepresenting a verse in the Koran when they claimed it meant Muslims should not vote for non-Muslims. His comments were met by mass protests by Islamic fundamentalist groups and Islamist parties who called for him to be charged under Indonesia’s 1965 blasphemy law for insulting the Quran and Islam. Under intense political pressure, the police eventually decided to open trial proceedings against Ahok last November. Given the low rates of acquittal for blasphemy cases, he faces a high chance of spending a maximum of five years in prison.

Unsurprisingly, the case and the resulting fallout did little to help his chances. In the first round of voting, Ahok ran neck and neck with Baswedan, with each receiving around 40 percent of the vote; Agus, running far behind, was eliminated.  While Ahok still managed to garner the largest vote share, it is unlikely that this will carry him through to victory in the second round, since Agus’s conservative muslim base will probably flock to the next best candidate, Baswedan. And even if he were to perform a miracle at the polls, it would be a pyrrhic victory, as his tenure would be cut short by a likely conviction for blasphemy. Still, it is too early to write this election off as a victory for Islamic nationalism. There are six weeks before the second round on April 19th, and the campaigns are not slowing down. Pluralism may yet have a chance, we will just have to wait and see.