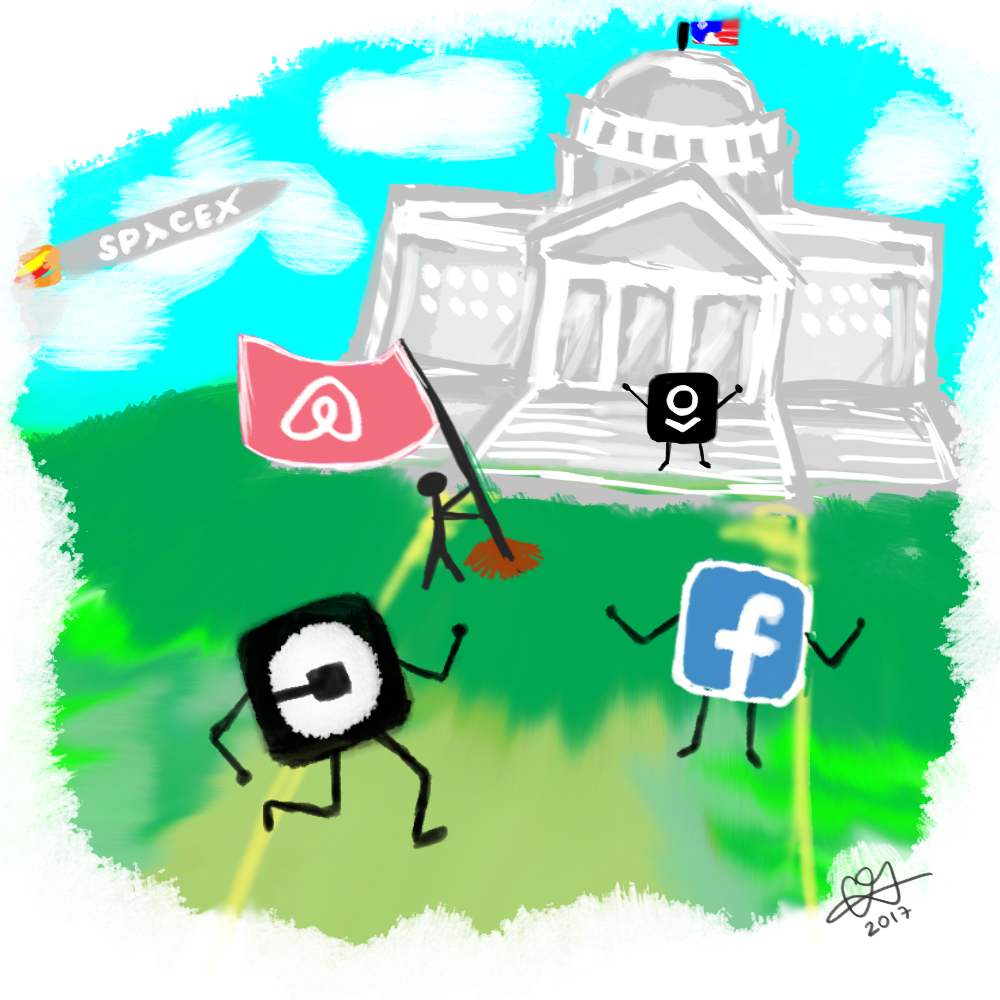 Since its inception as the the hub of innovation, Silicon Valley has primarily been known as a bastion of promising startups, cutting-edge technology, and endless wealth. Lesser known, however, is the influence companies and their respective CEOs wield in the field of politics.

Uber has both revolutionized the driving world, given the taxi industry steep competition, and has enjoyed immense popularity since its creation. However, Uber CEO Travis Kalanick has faced considerable backlash when it was revealed that he was part of an economic advisory council for President Trump. Although Kalanick originally stated that the best way to make change would be “to have a seat at the table,” the company quickly started to bleed due to the #DeleteUber campaign, which would ultimately result in Uber losing over 200,000 customers. After immense pressure both externally and internally, Kalanick stepped down, stating in an emails to employees that stepping down would be a way to advocate for immigration reform. Uber further tried to mitigate damage by announcing a $3 million fund that would provide legal services for drivers as well as compensate drivers who were currently banned from the country. Lyft, Uber’s main transportation competitor, quickly announced that it would donate $1 million to the American Civil Liberties Union in order to help “defend [the U.S.] constitution.”

Although Uber has been facing the consequences for its political choices, other companies in the Valley have been given considerable political opportunities. Elon Musk, chairman of SolarCity and CEO of Tesla and SpaceX, is perhaps the most prominent of such figures. A strong advocate for reducing global warming, which President Trump has claimed is a hoax created by the Chinese, many believe Musk has been wasting his time to promote such an agenda in the current political climate. Both Tesla, an electric car company, and its subsidiary, SolarCity, which builds solar energy panels, promote renewable energy in an era where Congress seeks to make massive budgetary cuts to the EPA and the president has promised to reinvigorate the coal industry. Despite this, Tesla’s stock has steadily increased since the election, and Musk is currently on the same advisory council that Kalanick was a part of. He has received some criticism, although a small amount compared to the outcry that forced Kalanick to drop out, and insists he is making progress with President Trump on controversial issues such as the immigration ban and climate change.

Additionally, Musk’s SpaceX may also be a strong contender for the Trump administration’s “space race.” Advisors within the administration have confirmed a push for privatization in the space industry, with traditional NASA contractors such as Boeing, or “old space,” competing against “new space” companies such as SpaceX. NASA under President Trump would likely make commercial partnerships with private companies, as well as transition low-orbit Earth satellites from government ownership to private ownership. Musk’s position on the advisory council gives him considerable political leverage for his companies.

On the opposite side of the spectrum, Silicon Valley also has its fair share of conservatives, as detailed by The Guardian, but none have been quite so outspoken as Peter Thiel, the multibillionaire who cofounded PayPal with Elon Musk, among others, and one of the earliest investors in Facebook. Thiel was a self-identified Libertarian who has donated to various Libertarian/Republican candidates, and most recently donated a hefty $1.25 million to President Trump’s campaign. Thiel’s contribution has not been without its benefit: he joined the Trump transition team in November, exercising significant power over some of Trump’s nominees. For example, Jim O’Neill, a fellow venture capitalist that Thiel has worked with, is one of the top contenders for the commission of the Food and Drug Administration (FDA); Mark Woolway, a fellow cofounder of PayPal, and Kevin Harrington, another venture capitalist, were added to the Trump transition team, likely under recommendations from Thiel. Thiel’s own company Palantir, a software company used by the government for counter-terrorism, has the data-mining potential to help build a Muslim registry that Trump promised on the campaign trail, although Palantir has rejected the notion that it would participate in such a program. Palantir, which had previously won a $200 million lawsuit against the Army, could make even further gains in government contracts with Thiel leading the way.

Airbnb under CEO Brian Chesky has challenged state and local laws to better accommodate its business model. The company, which allows users to rent their homes on their platform in exchange for a portion of the profit, has pushed back against regulations targeting its particular business model. In California, Airbnb has sued San Francisco, Anaheim, and Santa Monica for passing various ordinances limiting and even outright banning short-term rentals—the most common for Airbnb—without proper licenses and permits. Anaheim has already backed down due to the lawsuit, promising not to enforce fines that would fall onto Airbnb hosts. Airbnb has been less successful, however, in New York, where the state legislature passed a law in October that would prohibit listings that were less than 30 days, with fines reaching up to $7,500 for those who broke it. Although Airbnb sued, the company eventually settled, with an agreement that the fines would be imposed on hosts and not the company itself. This phenomena is not limited to the nation either; cities around the globe like Berlin and Barcelona are currently fighting litigation from Airbnb over local laws that regulate rental listings. Airbnb has started a war, and it will not stop until it crushes every statute in its way.

The biggest power play from Silicon Valley, however, may occur in the future. Rumors have started to swirl around the possibility of Facebook founder Mark Zuckerberg’s future run for office. Zuckerberg has denied that he plans to run for president, but his actions have said otherwise, or at the very least, hinted at some other elected office. After wishing people a Merry Christmas this past holiday season, Zuckerberg clarified that although he was an atheist, he now found religion to be very important in his life. Considering every president so far has believed in some form of Christianity, and a vast majority of Americans consider themselves to be Christian, this shift could be to win favorability over an important electoral bloc. Additionally, he announced as part of his New Year’s Resolution that he would visit the 30 states he has not been to yet and meet people from each state by the end of the year. Grassroots campaigning can be a very effective force, seen most prominently in President Obama’s 2008 campaign strategy. Perhaps the most conclusive evidence of Zuckerberg’s political aspirations is a small clause buried within Facebook’s public files that would allow him to work for the government while still maintaining control over the company. Zuckerberg may never run for office, but if he decides to, he’s certainly put himself in a good position to do so.

Silicon Valley has completely shaken up the rules of the political arena. Lawmakers cannot keep up with the constant influx of technological innovation, and as a result, regulations are few and far between. Even when they are proposed and enforced, companies have the money to mount costly legal battles and are often able to bully local governments into rewriting unfavorable laws. Silicon Valley has also given instant fame to the successful, allowing the rise of private citizens to dictate public policy.