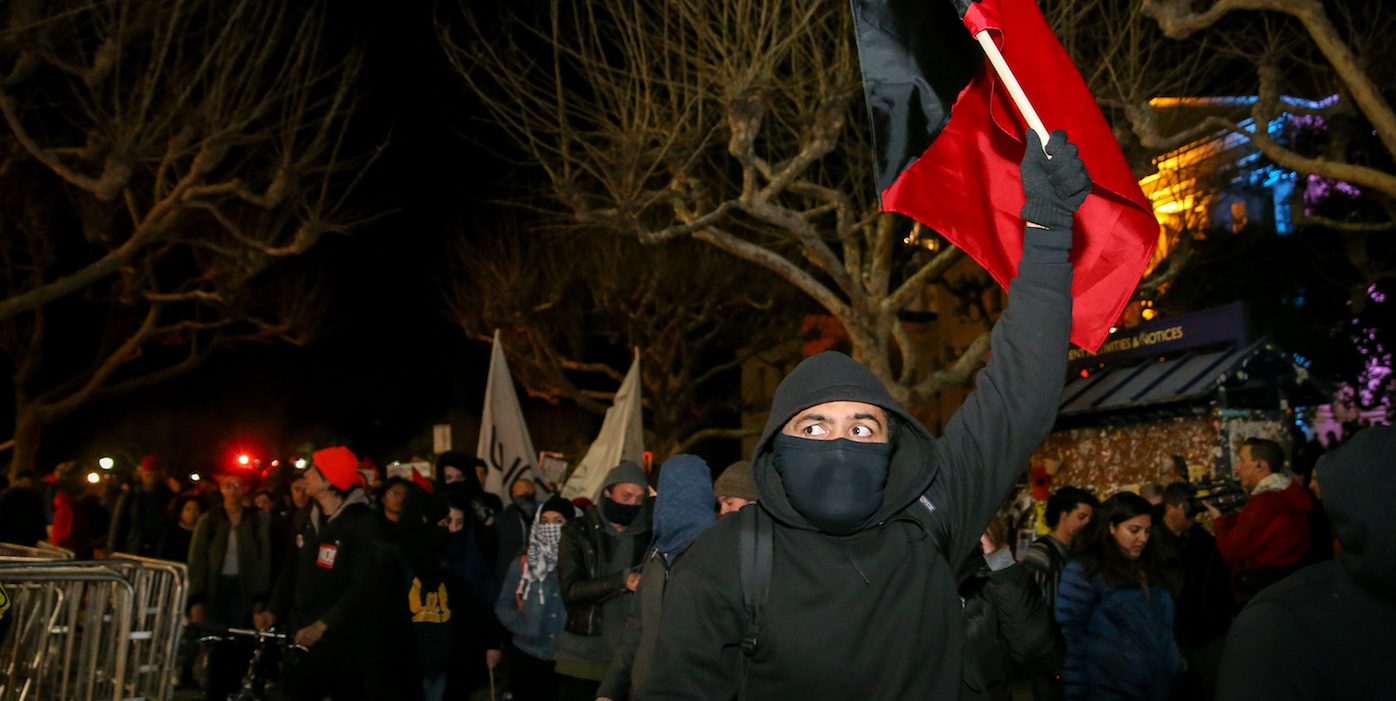 They showed up wearing black clothes and masks, throwing fireworks and smashing glass windows. They threatened people recording them, and attacked those who stood in their way. They set fires and threw Molotov Cocktails. Later, they were described as “Ninja-like” individuals who used “paramilitary tactics”. But this wasn’t a civil war or a terror attack. This was Antifa, a growing movement whose stated goal is to smash fascism.

Antifa groups have gained notoriety in recent years due to violent incidents around the country. In June 2016, Antifa Sacramento and other leftist organizations clashed with white nationalist groups. At the time, the far right Traditionalist Workers Party was organizing a rally outside the California State Capitol to ‘protest globalization’ and ‘assert their free expression’. In response, Antifa Sacramento issued statements on its website calling for direct action against these ‘Nazis’. As the rally began, members of both sides arrived with masks and weapons. The groups attacked each other with sticks and knives, and a riot ensued. 10 people were hospitalized with cuts and stab wounds, and streets were shut down after what was described as “free-for-all violence” between the far-left and far-right.

Despite its recent surge in notoriety, Antifa is not a new movement – it has its roots in political groups from the 1930s in Europe. These groups were primarily organized by communists and socialist democrats, and actively fought against Nazism and fascism during and after World War II. In the United States, the current movement began in the 1980s. One group belonging to the movement, Anti-Racist Action Network (ARA), originated to fight neo-Nazis in Minneapolis. Chapters soon rose across the country, where they violently clashed with neo-Nazis and skinheads on the streets and in the underground music scene, and organized protests against the KKK and other far-right organizations. These groups continued their political activism into the 2000s, protesting against the Iraq War. Over the past decade, Antifa groups in California have risen to prominence. Protesters today use ‘black bloc’ tactics, which provide anonymity to violent activists. They use encryption to communicate, although a large part of their organization is online, and many groups have their own websites. Black bloc protesters wear black clothing, scarves, sunglasses, ski masks, motorcycle helmets with padding, or other face-concealing and face-protecting items. Some of the tactics used by the group borrow from civil disobedience movements, including sit-ins, blockades, and disruptions. While the movement itself is de-centralized, Antifa groups in the Bay Area and Southern California share the common goal of ‘smashing fascism’ with groups from across the country, such as NYC Antifa.

Despite the intense media scrutiny in the aftermath of recent events, the broader political motives of Antifa groups in the United States are still not widely known. The stated objective of most Antifa groups is to oppose fascism in all forms. However, the decentralization of the movement has meant that ideology and methods of protest are not uniform. US Antifa groups have adopted the ‘no platform’ policies of their European counterparts, whereby they do not take a broad political stance in order to unify anti-fascist activists who may not agree on all political issues. As a result, the Antifa movement has many different, generally leftist, factions: communists, socialist democrats, and anarchists. The diverse motivations of different members of the movement has divided opinions on the left while enraging the right. Conservatives criticize the movement for its anarchist activities that violate the law and appear to stand against the Constitution and government in any form. Within the left, the group is criticized for being too radical, and for taking extra-legal measures to promote progressive policies. Since the group itself doesn’t have a platform, it’s unclear what its various factions will do in the future, or what their objectives will be after its goals are met. Will the group enter the mainstream once the political scenario is more conducive to their policies, or will the anarchist factions take over and continue to oppose any government?

As political opposition to the current administration grows, and grassroots involvement in liberal politics increases, Antifa groups will become more and more relevant. However, the groups will struggle to receive mainstream support due to their violent approach to activism. Conservatives have called for Antifa to be labelled a terrorist organization, while liberals are still divided on how to respond. Some liberals argue that only peaceful protest is legitimate, while others argue that Antifa’s behavior is justified.

Antifa believes that the only means to achieve social equality and to defeat fascists is through violence. However, violent revolution can only be acceptable if the ends justify the means. Antifa groups claim that they act to protect minorities. However, rioting and vandalism only serve to harmfully impact minority communities, as they hurt local businesses, and prevent local employees – who are often members of minorities – from being able to work. While Antifa groups claim the current administration is adopting policies that are harmful to minorities, the government has not yet engaged in violence that justifies the response from Antifa. As long as the political administration remains within the boundaries of the Constitution, any opposition that seeks to go beyond constitutionally allowed measures will be seen as illegitimate. Antifa’s violence will only be justifiable to Americans in the face of government-sponsored violence.

Antifa is becoming an important part of a new political resistance, but the organizations will need to decide on long-term political goals that are sustainable within the framework of the US Constitution before they acquire legitimacy. Without long-term political goals, the group will not emerge from its shadow of violence, and will continue to face public opposition from throughout the political spectrum. Antifa must settle on its political motives, or else it risks being overtaken by anarchists and perpetrators of mindless violence. In order for Antifa to achieve real political change, it will need to change its method and goals, or wait for its violent revolution to become truly necessary.