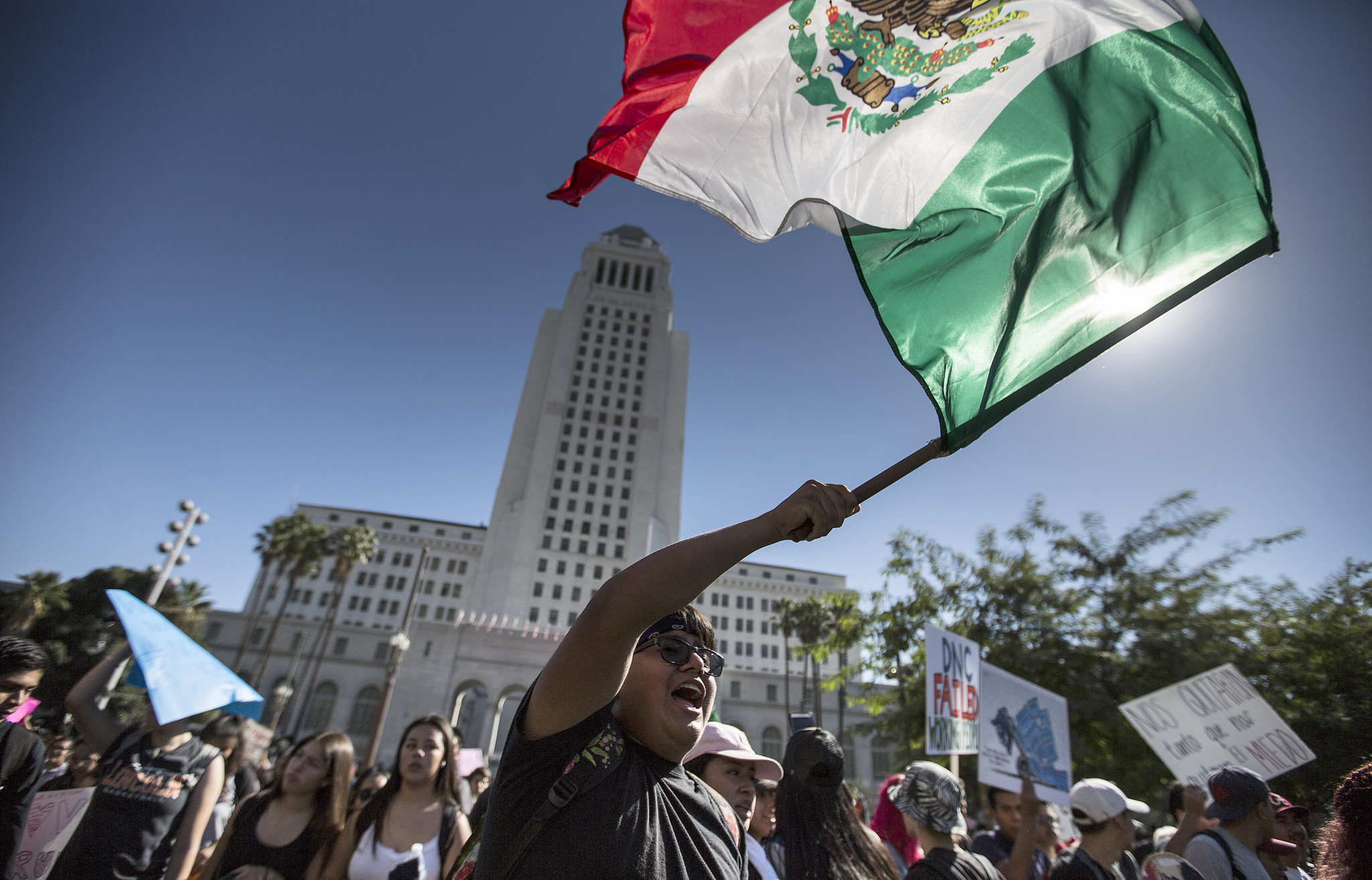 Donald Trump and the Future of Sanctuary Cities

The sentiments expressed by Mayor de Blasio are echoed by mayors from major cities across the country, but with President Trump’s threat to cut federal funding to cities, the question arises, how quickly will the cards fall in Trump’s favor?

According to a report published by the Center for Immigration Studies and in agreement with congressional testimony offered by ICE Director, Sarah Saldaña, as of 2016 there were about 300 jurisdictions “identified by ICE as having a policy that is non-cooperative [to federal law enforcement] and obstructs immigration information.” These sanctuary cities have maintained a policy over the years “designed to limit cooperation with or involvement in federal immigration enforcement actions.” While there is no exact set of policies that specifically defines a sanctuary city, hallmarks of their policy include having local officials “not ask about a person’s immigration status” or when arrested for a crime, having an undocumented immigrant serve their time without local officials notifying federal authorities of their immigration status.

The policies that have given rise to the labeling of such “sanctuary cities” originated in the 1980s, when an influx of refugees from Central America began immigrating to the United States following violence in their respective states, states such as El Salvador, Guatemala, and Honduras. In response to federal reluctance to grant refugee status to these immigrants, sanctuary cities began openly defying federal law and accepting these refugees, an effort pioneered by Los Angeles as early as 1979. Sanctuary cities became even more prevalent in the early 2010s, and in response, President Barack Obama expanded a “nationwide program allowing the Department of Homeland Security to receive the fingerprints of every person booked by the state and local police.” However, despite these attempts to assert federal authority, very little was accomplished in terms of minimizing the number of sanctuary cities.

In today’s immigration climate, the very fate and indeed, survival, of such sanctuary cities is in question.  With the inauguration of Donald Trump and the signing of an executive order which, according to White House Press Secretary, Sean Spicer, “will strip federal grant money from the sanctuary states and cities that harbor illegal immigrants,” President Trump is attempting to coerce sanctuary cities to abandon their policy of non-cooperation with federal law.

With regard to these three different scenarios, the first can be dismissed quite easily. It is highly unlikely that Donald Trump will back down from his promise to defund sanctuary cities should they choose not to comply with federal immigration authorities. In the short time that he has been in office, he has already proven to be a president who does not acquiesce easily, regardless of the backlash. For example, despite the backlash in the form of protests and judicial dissent for Trump’s punitive immigration executive order on countries with a terrorist presence, often referred to as a “Muslim Ban” by the mainstream media, Donald Trump is refusing to step down, and instead has issued a new ban of a similar nature. Thus far, if anything, Donald Trump has been a president who has proven to maintain the position he held from the very start, despite the backlash that may result. If, then, Trump is consistent with his previous behavior and does not back down from the sanctuary city issue, this then leads to the final two options: either sanctuary cities themselves back down, or they continue to protect undocumented workers, despite the consequences. But as it turns out, both scenarios are already materializing.

Interestingly, the distribution of cities that choose to back down versus cities that vow to continue their policies despite federal law is directly correlated to their size and power.  Large cities such as Chicago, New York, and Los Angeles promise to continue defying federal immigration laws while smaller cities such as Dayton, Ohio have recently reversed their policy in fear of the repercussions of defunding.

According to the Dayton Daily News, the Dayton Police Department has recently “rescinded a policy that… prohibits officers from contacting federal immigration authorities in cases involving misdemeanor violations and felony-level property crimes.” This reversal coincides with Trump’s executive order calling for the freezing of federal funding to all sanctuary cities. Meanwhile, other cities such as Chicago, have promised to continue to protect illegal immigrants.  Chicago Mayor Rahm Emanuel makes this perfectly clear when he announced that “we’re [Chicago] going to stay a sanctuary city. There is no stranger among us… you are welcome in Chicago as you pursue the American dream.”  Likewise, San Francisco Mayor Edwin Lee announced in January of 2017 that “San Francisco is a sanctuary city and will not waiver in its commitment to protect the rights of all its residents.”

However, in order to understand why smaller cities have abandoned their policy of non-compliance with federal immigration orders while larger cities have not, the effect defunding sanctuary cities will have upon the people and government in those cities must be examined. While it is true that the Office of Management and Budget (OMB) does have the power to largely cut federal funding to cities, it is highly unlikely that all federal funding will be cut. However, that is not to say that the cut in federal funding will not be large. Indeed, each city and state receives numerous federal grants that range in the millions of dollars. For example, the Edward Byrne Memorial Justice Assistance Grant Program, just one grant out of the many awarded to states and cities, “allocated $274.9 million in 2016” with the states of California, Texas, Florida, New York, and Illinois receiving the most money.

To a large city like New York or Chicago, however, federal grants are negligible in comparison to the sheer cost and generated revenue of the city. Meanwhile, for smaller cities such as Dayton, federal funding goes much farther. For example, as of 2017, the city of Dayton’s estimated budget is estimated at $512.5 million while in contrast, San Francisco anticipates to spend $11.3 billion in 2017.

Interestingly enough, the future of sanctuary cities may be uncertain. A poll taken by the Institute of Governmental Studies at the University of California, Berkeley indicated an utter lack of public support for local interference with “federal requests to detain

undocumented immigrants who have been arrested but are about to be released.” 74 percent of participants, identifying as both Republicans and Democrats in the state of California are opposed to local interference, a fact that, coupled with the threat to withdraw federal funding from cities who are sanctuary cities, may cause sanctuary cities to be coerced into amending their policies.

An even more recent poll, shown in Figure 1, conducted in February of 2017, shows a similar trend. The Harvard-Harris Poll reported that around 80% of “voters say local authorities should have to comply with the law by reporting to federal agents the illegal immigrants they come into contact with.” Interestingly enough, this shift in public opinion did not arise from Donald Trump, his supporters, or his election. Rather, the first major reversal in public opinion in terms of supporting, or rather, withdrawing their support for sanctuary cities, arose in 2015 with the terrible murder of 32-year-old Kathryn Steinle after she had been shot and killed by a previously detained undocumented immigrant.

One thing that must be considered, however, is not just the effect that a cut in funding will have, but also the effect that voter opinion will have as well. Recent polling indicates that voters are becoming increasingly concerned with the policies of sanctuary cities and despite calls by a few to transform California into a sanctuary state, the power of public opinion and the power of money, especially combined, should never be underestimated.