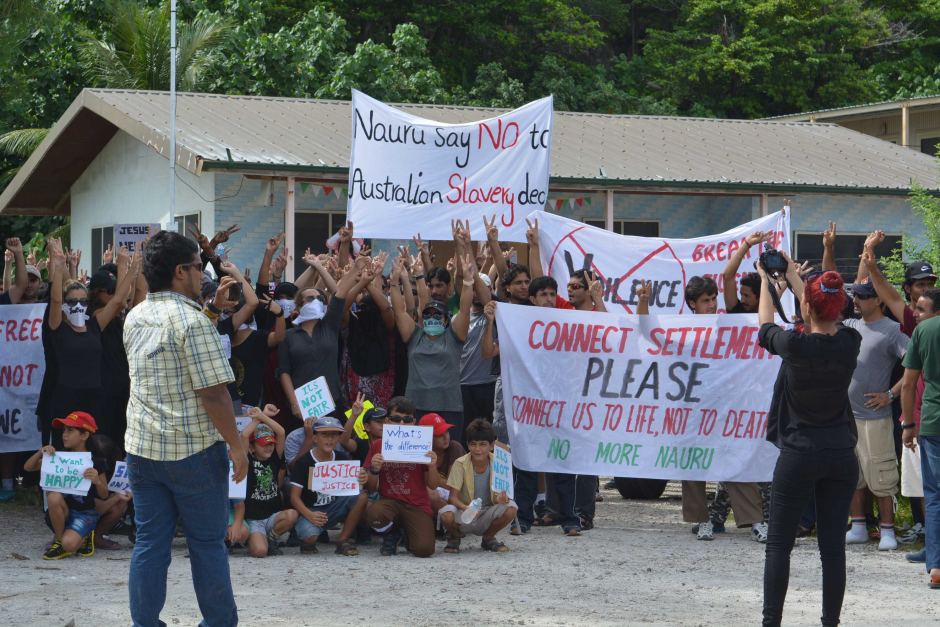 Stuck in Limbo: Asylum Seekers in Nauru Unsure of Their Fate Under President Trump

Nauru, the world’s smallest republic which lies about 1800 miles off the coast of Australia, has recently been in the spotlight because of President Donald Trump’s and Australian Prime Minister’s Malcolm Turnbull’s well-publicized phone call. The week after Trump issued his executive order, which banned travel by non-citizens from 7 Muslim majority countries and all refugees for 90 and 120 days respectively, Trump was apparently blindsided by a classified agreement between Turnbull and President Obama, which stated that the US would take 1,250 refugees from Nauru and Manus Island in Papua New Guinea (PNG),

Australia has been in charge of the detention camps (through a contract with a private company) on Nauru and Papua New Guinea since 2012. Instead of processing or resettling any asylum seekers (even if they are found to be eligible for asylum, which some numbers suggest 77% are), Australia instead settles the migrants on the islands or looks for other countries who are willing to accept them. Four asylum seekers were costly settled in Cambodia. In PNG, these refugees are mostly men from Iran, Afghanistan, Pakistan, Myanmar, and Iraq (2 of the 7 countries banned in the executive order) while in Nauru the top five countries of origin are Iran, Sri Lanka, those who are stateless, Pakistan, and Bangladesh. Many of them have been in the camps for years. Only asylum seekers who come by boat are in the camps, as those who come by plane are not targeted. This allows the Australian government to claim that the camps are for the asylum seekers’ own safety since many of the boats are poorly made and controlled by human traffickers.

Due to its history with the two islands, the Australian government had sent asylum seekers there with many of them being resettled in Australia by 2008, as part of the so-called “Pacific Solution.” Nauru gained independence in 1968 after being a colony of various nations, while PNG gained independence in 1975 from Australia. Nauru, in particular, has struggled post-independence. Nauru was blessed with phosphate reserves but post-independence, these were depleted due to mismanagement and corruption by successive governments. Nauru then became a home for offshore money laundering, but after the practice was criticized, became economically dependent on Australia once again. This dependence allowed Australia to open the camp in Nauru, as it is a big economic driver.

In Nauru, there have been over 2,000 allegations of abuse of asylum seekers. These allegations have included the sexual abuse of children and adults, along with beatings by guards and a lack of medical care. This has led to an increase in suicide attempts and mental health problems, and two publicized self-immolations. The full scale of abuse is not known as international reporters have been banned from coming to the island. The Australian Broadcasting Corporation was even embroiled in a scandal with Nauru’s government over their reporting on the conditions. Previous employees of the camps are also forbidden by Australia from speaking about the camps for 2 years.

Due to these abuses, the PNG Supreme Court found the PNG camp to be unconstitutional, which is why the governments of PNG and Australia are trying to close it, leading to the agreement with the US. Additionally a brief by legal experts was recently sent to the International Criminal Court alleging that the camps are crimes against humanity. However, it seems that Trump is not honoring the agreement thus far as vetting of asylum seekers on both camps has been stopped indefinitely.

Both major parties in Australia support this hardline stance on immigration, including a 2013 policy militarizing border enforcement, which has the military send the boats back to from where they came from. Two-thirds of Australians said that the government should resettle the asylum seekers, particularly in New Zealand, whose help Turnbull had refused in the past. Thus, Turnbull is also under public pressure to close the camps as long as the refugees are not resettled in Australia itself.

In terms of the refugee situation in the US, the total number of refugees entering the US was around 110,000 in 2016, which President Obama had set as his goal. Half of these refugees were from Congo, Syria, and Burma. However, 2017 will be different due to the Trump’s executive order. Refugees are already fleeing the US to go to Canada in case the EO is reinstated or another one is issued. This leaves the refugees on Nauru and PNG who were supposed to go to the US stuck in limbo between domestic and international political maneuvering in conditions deemed “illegal and unconstitutional.”