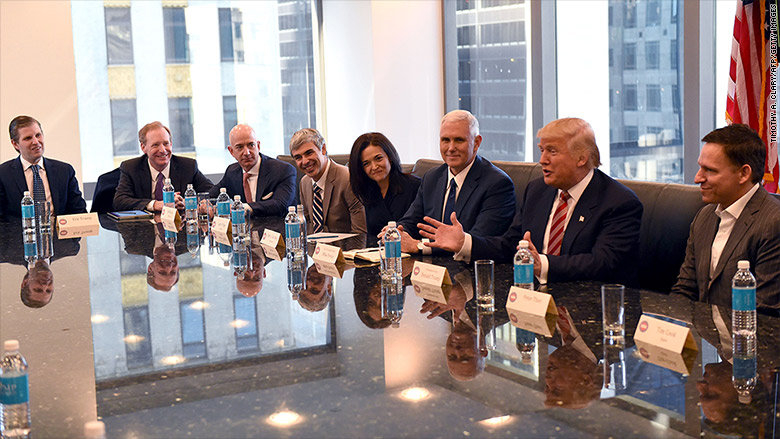 How the President has incited political action from Silicon Valley

“This is truly an amazing group of people,” President Donald Trump said in a meeting with prominent executives during his presidential transition. “I’m here to help you folks do well.”

The executives weren’t the Wall Street bankers or oil magnates Trump is often criticized of favoring; rather, they were the most prominent figures in the tech industry. The illustrious group included Tim Cook (Apple), Larry Page and Eric Schmidt (Alphabet), Satya Nadella (Microsoft), and Sheryl Sandberg (Facebook) – leaders of five of the seven most valuable companies in the world.

Although few executives at the meeting supported Trump during his presidential campaign, reports claim that the conversations were productive. They reportedly centered on policies the tech industry felt were necessary for its continued growth, most notably expansions of immigration for skilled workers, STEM education in public schools, and paid parental leave. The degree to which Trump, a critic of tech industry practices during his campaign, will consider their opinions remains to be seen. Presidents tend to outline their annual objectives in their joint-sessions speech to Congress; Trump prioritized traditional industries like manufacturing, steel, and coal but made no mention of tech in his February 28 speech.

Tech leaders speaking with the president-elect on policy issues is a relatively new phenomenon; the industry is young compared to other politically active industries such as financial services and oil and gas, and its involvement in politics is even younger. Until recently, tech companies only participated in policy discussions that directly affected them. Protesting SOPA (Stop Online Piracy Act) in 2011 and legislation to end net neutrality in 2014 were some of the first few times that tech giants convened to leverage political power against bills that would hurt them as a collective. The unified community efforts, including site-wide blackouts, clearly coerced lawmakers – SOPA died in the House shortly after the protests, and the FCC ruled in favor of net neutrality in 2015.

Perhaps the industry’s youth and emphasis on innovation meant that firms jockeying for power in the new space viewed others only as adversaries rather than as allies too, choosing to stay silent on political issues rather than come together as an industry and have their voice heard more loudly. Or maybe, it’s because of the wide ideological range of their user bases. Almost every American, regardless of political affiliation or background, uses a product by Apple, Alphabet, Microsoft, or Facebook daily, so these companies risk destroying their spirit of inclusivity and losing out on users by alienating part of the American population with their political views. But in the fight against Trump and his policies that would hurt the tech industry, competing firms are colluding for the first time, pooling together their political capital to fight legislation that is not explicitly tech-related and stands to harm all of them.

Opposing the president of the United States is a new position for many of these executives, who overwhelmingly supported Barack Obama during his administration. Industry leaders made handsome contributions to his campaigns, and the president pushed forward legislation that allowed the industry to help drive the U.S. economy’s growth over the last eight years. The president who owes his 2008 campaign success in part to tech-driven social media has invested in an internet infrastructure overhaul, guaranteed stronger protections for intellectual property, increased STEM funding for public schools, and even created a CTO position in the White House. And the industry has grown accordingly. In 2008, the top 10 most valuable companies included just Microsoft from tech. By the final quarter of 2016, five of the top seven were tech companies (listed above), and all of the top ten were American-based.

Neither Trump nor Hillary Clinton emphasized tech in their campaigns to the degree that Obama did in his eight years in the White House, and the industry did not financially support either candidate in the same way that it did Obama. As a result, the tech-politics relationship is likely to be weaker in the Trump administration, which is especially notable due to his predecessor’s unique bond with the industry.

Obama’s strong relationship with these firms extends beyond campaign support and policy changes – Washington, D.C. and Silicon Valley have grown close over time, allowing for a “revolving door” between Obama staffers and tech executives. For example, Obama’s 2008 campaign manager David Plouffe now runs strategy for Uber and the Chan-Zuckerberg Initiative, former Google executive Megan Smith is now the country’s CTO, and former Press Secretary Jay Carney now serves as an SVP for Amazon. Ending this White House-Silicon Valley relationship could therefore spell negative consequences for both the Trump administration, which could alienate one of the nation’s fastest growing sectors, and the tech industry, which would lose the president’s ear and end up harmed by new laws.

Tech’s opposition to Trump is unsurprising given how strongly the interests of each party clash. In particular, Trump’s nationalist and populist campaign platforms of limiting immigration, increasing tariffs on goods traded internationally, and breaking powerful corporations act against tech’s best interests. A 2012 study from the Brookings Institution, a center-left public policy think tank, shows that the information technology industry employs a disproportionately high number of skilled foreign-born workers relative to the rest of the country and that that share of immigrant workers has been steadily increasing. Trump has already started to deliver on his campaign promises to limit legal immigration Executive Order 13767 (popularly known as the “travel ban”), which acts agnostic to the education and skill levels of the person trying to enter the country. Tech’s reliance on immigrants, from software engineers to executives, stands to be strongly weakened by Trump policies. In addition, a majority of American electronics are produced abroad, where firms can capitalize on cheap labor; instituting an import tariff on these goods would make popular electronics like iPhones and Macbooks significantly more expensive in the United States.

And it doesn’t seem likely that the level of Trump opposition within the industry and tech culture will change anytime soon. The San Francisco Bay Area, headquarters to many of these tech companies, has long been known for its liberal culture and has historically supported Democratic politicians; the fact that principles of the tech industry are based off transparency and fairness creates a perfect storm for the liberal culture within tech, even among wealthy executives.

The culture is so strong that executives who do support Trump have faced heavy criticism, most notably Elon Musk (PayPal, SpaceX, Tesla), Peter Thiel (PayPal, Palantir), and Travis Kalanick (Uber). Kalanick joined Trump’s Strategic and Policy Forum as an adviser in December, and his company suffered as a result. When New York taxi drivers protested the immigration ban by performing a strike at JFK International Airport, Uber continued to allow its drivers to stop at the airport. The fact that the company did not make a statement against Trump coupled with its CEO being an advisor for him at the time led to an anti-Uber movement on social media – #DeleteUber became one of Twitter’s top trending hashtags. Meanwhile, Uber’s primary competitor Lyft took advantage of the opportunity and announced it would donate $1 million to the ACLU, who is fighting the immigration ban. Kalanick stepped down from the president’s council shortly thereafter. Uber faced negative financial and PR consequences for not speaking out against Trump, proving just how much some users value political statements, and anti-Trump sentiment in particular. Other tech companies could learn from Uber’s and Kalanick’s lesson by taking a stronger stand against Trump in the future.

But so many companies acting against the current president of the United States may not end well for the industry. Trump has millions of ardent supporters who use these products, just like every other American. Estranging these users may not be a risk that tech companies can afford to take, considering how passionate opinions of Trump are on both sides. The president, his family, and his aides have not shown a reluctance to speak out against specific companies and brands in their brief time in office; if tech companies continue to actively speak out against Trump, they could find themselves on the wrong side of his favoritism.

To balance appeasing the political opinions of the president of the United States and those of their own users looks to be a tough task for the tech industry. Growth boomed during the Obama administration, and industry leaders were happy knowing they had support in the Oval Office. Tech’s political capital is no weaker with Trump now in the White House, but the industry must learn how to correctly address the concerns of the president and keep him on their side. Trump is talented at playing the media (a huge factor in his initial political rise), so his reaction and response to the tech industry will likely determine whether its influence in national politics will continue its strong ascent or if it was just a phase of the Obama administration.
Sitting down with the president-elect during his transition doesn’t imply that the tech industry is suddenly the most important. Traditionally powerful industries still hold power – Trump’s cabinet includes coal and steel magnate Wilbur Ross and former Goldman Sachs executive Steven Mnuchin – but no tech executives. Perhaps Silicon Valley leaders need to reconvene and decide how to best profit from their new political capital so they aren’t left without a seat at the table again.