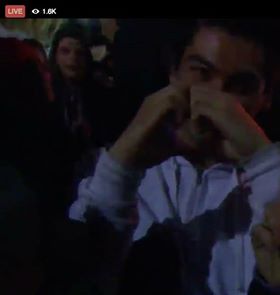 My, No!: A Firsthand Account of Milo Yiannopoulos’s Visit to Berkeley and the Ensuing Chaos

“Dude, you gotta get over here. It’s crazy. They set stuff on fire.” With this text message, my friend convinced me to leave the comfort of my bed and go to campus to witness the Milo protest. In that moment, stumbling out of my room and hastily putting on a pair of jeans, I was unaware that I was about to witness history. Over the next few hours, I watched how a peaceful protest organized by a group of students get taken over by armed thugs who wanted to cause chaos under the pretense of protest. I saw this group, ANTIFA (Antifascist International, Oakland Branch) destroy and loot buildings, and viewed the response by the UCPD and Berkeley Police Department. Considering the massive national outrage over this incident and the subsequent discussion about how to respond to it, I feel it important to clear a few things up. If I’m being honest, I’m kind of proud that our school is the first to get an angry mention by Dear Leader. (Source: Trump’s Twitter)

1.  Students truly weren’t the ones causing riots. They wanted to dance.

When I arrived to the protest, the first thing I noticed was the fire. My friend told me a light fixture was knocked over, which caught fire upon hitting the floor. By this time, ANTIFA members had already shown up, and were throwing signs and other flammable objects to keep it alight. Meanwhile, the students were a little bit away from the scene. Considering how the fire was directly under a balcony occupied by the police, everyone was hesitant to approach it. Only ANTIFA wanted to come into direct confrontation with the police.

However, the fire wasn’t the only object of interest at the protest. Somebody brought a massive speaker system to the protest, and was handing the microphone to different people who were attempting to start chants or voice their opinions. I’m not going to lie and deny that there weren’t students who had some choice words for the police. The police responded in kind with a megaphone, repeatedly declaring that the protest was an “unlawful assembly” and that they would use tear gas if necessary.

In response, the person with the loudspeaker decided to change tact. The chants stopped, and in its place “Bad and Boujee” by Migos came on. The second everyone heard the lyric “You know, we ain’t really ever had no old money, we got a lotta new money though,” the atmosphere instantly changed. Instead of anger, there was love. People got into circles and started dancing, and those who were once shouting started singing. After all, dance parties can’t be unlawful assemblies, right?

Excuse my poor quality snapchats. I was dancing. (Source: Author)

Honestly, if there’s one part of the media coverage of the Berkeley protests that I find fault with, it’s this. I believe that the media intentionally chose to ignore the spirit of friendly camaraderie that pervaded throughout this part of the protest. Showing college students dancing and generally being happy doesn’t generate many pageviews. Portraying our school and the students who attend it as deranged liberals who take pleasure in destroying things does. Buzzfeed Live deserves some recognition though, they stayed around. I managed to get on their stream. I’m the guy on the left in the cover photo, trying to make hand hearts to spread some love.

2. That being said, the way some people treated Trump supporters was atrocious.

Even though most students just wanted to party, I cannot deny that there were a small minority of students who did some pretty awful things. Whenever a Trump supporter wanted to express their opinion (as is their constitutional right), they got immediately shot down, cussed out, or worse. I saw someone get egged in the face, and witnessed someone steal a Trump supporter’s “Make America Great Again” hat right off his head.

This is disgusting. The worst thing that could’ve happened for the alt-right is if Milo showed up, gave his speech, and left without incident. These violent actions only further the narrative of white persecution. While it is important to note that the vast majority of students didn’t engage in such horrible behavior, it is equally as important to condemn those that did.

Anyways, after a solid thirty minutes of dancing, the masses decided to take the party to the streets. The people with the speakers rolled them down Telegraph Avenue, and this is where things got out of hand. Once we moved into the streets, ANTIFA revealed their true intentions. The first victim was Bank of America. Located less than a block away from campus, ANTIFA destroyed the ATMs and security cameras. This guy wanted a souvenir from Bank of America. (Source: Author)

A hush immediately fell over the students, as we didn’t want to be associated with the rioters. From there, many of the students left the scene entirely; we didn’t sign up for this. Only a few, such as yours truly, remained out of morbid curiosity. I wanted to document as much as I could. However, this proved difficult to do. Whenever ANTIFA found itself a new target, a small minority stayed behind with the crowd. They began to monitor everyone, and if they found anyone filming, they would antagonize those individuals.

Here they are looting a Starbucks. If you look closely, you can see them throw the coffee out into the crowd. I had to be on the side in order to avoid the people “policing” for people filming.  Also, please excuse my language. (Source: Author)

Here I must address the idea that the student body was complicit in the riots by allowing them to happen, which is an opinion that I’ve seen propagated by many a news outlet. That’s ludicrous. These people are blinded by their ideology, and as a student it was impossible to denounce them. I showed up to this protest with nothing but my phone and wallet and stayed because I was curious. They showed up with hammers, crowbars, and homemade riot shields and stayed because they wanted to destroy things. I honestly tried. I asked two people who stayed behind to monitor people filming why they were looting. “What purpose does this serve?” I interrogated. They neglected to reply.

However, I did manage to get an answer out of one man. He told me he was in his forties after I asked him; it was hard to gauge how old people were because they were all wearing masks. “I came out of retirement for this!” he yelled gleefully. “If you punch a Nazi, that’ll teach ‘em to not be a Nazi!”

So after following the rioters around, I wanted to see the other side. Up until this point, the police had been largely ineffective at corralling people. However, after everyone took to the streets the police began to reclaim the campus. They established a formation that consisted of several waves of people forming a physical wall. They gave plenty of time for people to get out of their way so that they could retake control. Here they are in formation. I don’t know what point the man in the red hoodie was trying to make, but this definitely wasn’t the way to do it. (Source: Author

Those who still remained combative with the police were dealt with quickly and quietly. If somebody was getting in the way of their operation, they would  There weren’t too many people who were actively resisting them, but there were a lot of taunts. Some people even took selfies in front of the massive line of police. However, as long as you remained in front of the barricade they were trying to establish, you were fine. But that man was not. (Source: Author)

The Berkeley and UC police deserve respect for their actions that night. Berkeley is a city with a strong liberal bias, so the police department recognizes that to some extent they cannot crack down on protests. The backlash would be too immense. Nonetheless they did manage to take control of campus in an extremely professional, extremely reasonable fashion.

As the police department slowly took control of more and more of the campus, it became apparent that they would soon face the protesters. The two groups finally came to a head outside of the entrance to Main Stacks, Berkeley’s largest library. As a result, now there were essentially three groups of people: the police, the protestors, and random students who were done studying and just trying to leave the library.

What was interesting was that the protesters assumed that the police were going to make the first move. They were all telling each other to be strong, to prepare for tear gas, and to memorize a phone number one can call if they got arrested for legal help. However, after a few minutes it became clear that the police force wasn’t going to do anything. They understood that any action would cause the random people trying to leave the library to be caught in the crossfire. So, they simply maintained their formation, almost daring any rioter foolhardy enough to approach them. Nobody did, and eventually the rioters backed off and returned to the streets.

Once back in the streets, the energy of the rioters died down considerably. Just the mere sight of the police caused some people to flee, so now the group was noticeably smaller than before. I personally had had enough as well. I made a quick pit stop to get boba, headed home, made a Facebook post about how cool it was to be on Buzzfeed Live, and then promptly fell asleep.