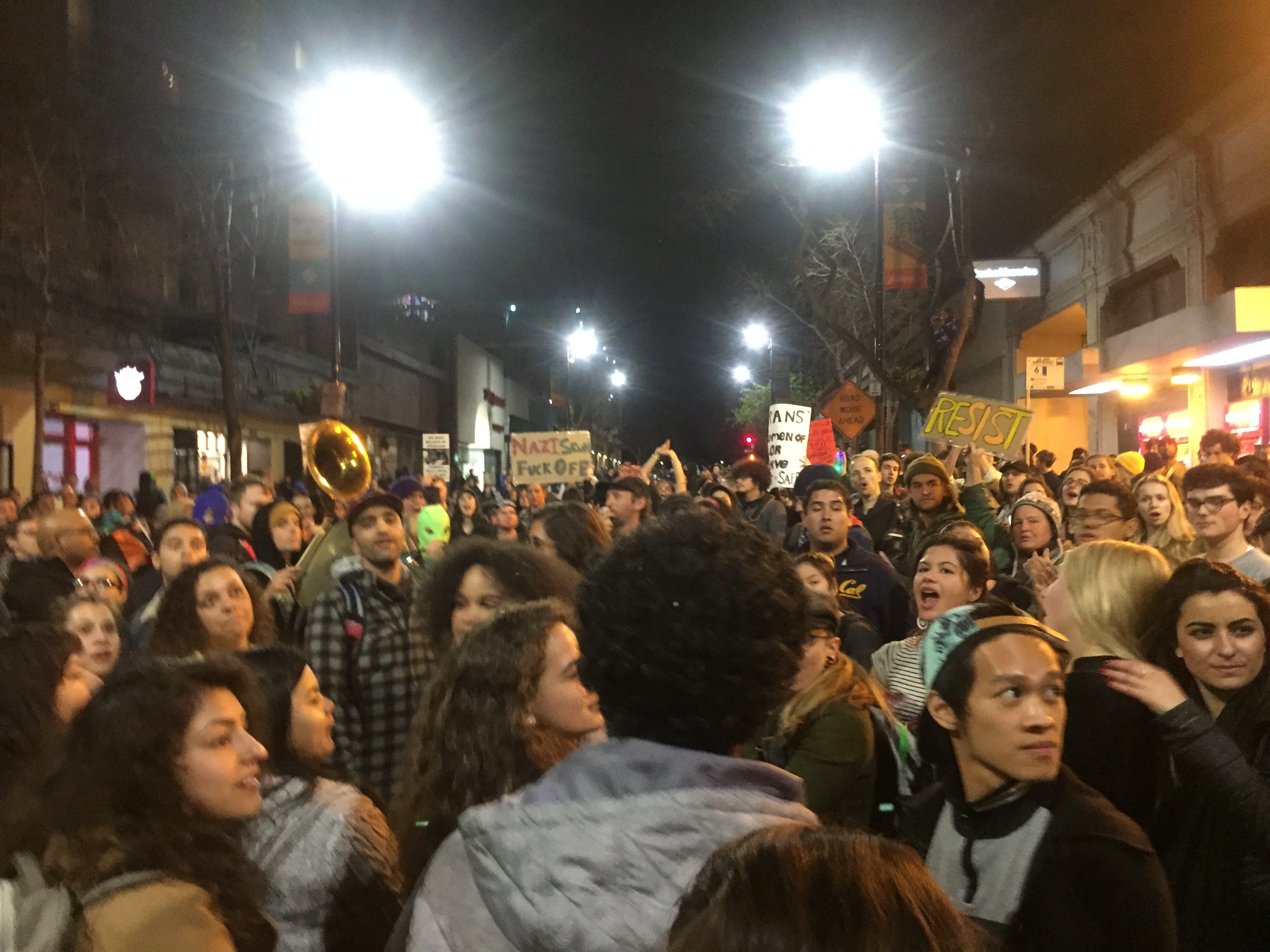 Megaphone to the Bypassed Masses

Faces in the Crowd, All Valuable Lenses into February 1st

On February 1st, Cal returned to the forefront of the American public consciousness in the visage of a trashcan fire and shattered glass.  It’s been quite a year for UC Berkeley; our school has reliably generated pageviews with our community-wide revolt against conservative politics.  The representation of these protests by mass-market media has been pejorative, buzz-word laden: demonstrators for QARC in October were framed as “anti-white.” Protesters following the election bore the title “sore losers.”  Following February 1st, we’ve been described in more problematic adjectives: we’re now anti-speech-anarchists.  This billing of Cal as a heel for free-speech garners high ratings because of its entertaining hero/villain binary simplicity, but loses swathes of nuance through the reduction of Cal into sweeping descriptors.

On February 2nd, headlines painted narratives of Cal students desecrating the university’s Free Speech Movement history.  Pundits declared that our university “should be ashamed of itself” for the riots- never mind the campus’ public condemnations thereof. Fox published an op-ed lamenting the, “Homophobic, Racist Xenophobes at Berkeley.”  The image these sources paint through selective representation is one of riotous, angry students clamoring for echo-chamber safe spaces.  The narrative the media pushes is that of a temper tantrum.

Whoever shouts loudest about an event in today’s media climate determines the prevailing truth of what happened.  Truth, then, emerges from whoever’s megaphone holds greatest reach.  This becomes problematic when the most expansive voices profit from sensationalist narratives: facticity loses importance and dramatic adjectives supersede fair representation.  These narratives are penned by absentee third parties hundreds of miles away; what truths are lost over this distance?

Enter the primary source.  Primary sources are biased by limited scope; they’re imperfect, but they’re undeniably valuable.  Primary Sources were there: for all their flaws their presence grants them primacy far above desk-jockey television pundits.  A composite of eyes on the ground paints a far more vivid picture than can a singular helicopter.  What do primary sources tell us happened February 1st?

Kalid Yacoub, a non-marcher-participant, embodies one such primary source.  He, “dressed in a suit,” was accused of “(looking) like a Nazi” before being “pepper sprayed” and “beat… to the ground with a… baton.”  This at first affirms the violent student narrative, but Yacoub goes on further to clarify: “I do not believe that (the man who assaulted me) was a student.”  Yacoub asserts that “(the man) belonged to a group of anarchists that came to the protest to incite violence and crime.”

“I just want everyone to know that this wasn’t a student,” Yacoub cautions, “the students were peacefully protesting.  It’s these groups of anarchists who started the violence”

Yacoub’s is just one narrative, but already it grants more depth to what happened February 1st.  Differentiation is made between Berkeley students and violent rioters, whereas before the two were homogenous.

Like Yacoub, every face in the crowd has its own truth for February 1st.  Some were high, some were gleeful, some were scared, some committed crimes, and some had crimes committed against them.  All of them are important.  All of them can contribute to a more factual narrative.  To reduce the events of February 1st to singular adjectives written on February 2nd by third parties is to forever silence primary source stories.  It muddles and obfuscates truth.

The truth of an instance does not emerge in its moment, but emerges as a product of its representation thereafter.  As important as the night of February 1st is, the morning of February 2nd is infinitely more so.  What is the singular truth of what happened? There is none: all representations interject bias.

Inform yourself with the voices of those who were there, not profiteer speculators in a far-off news studio.  The primary source should be just that: your source, primarily, in determining your truth.

John Rider
More from The ReviewMore posts in The Review »