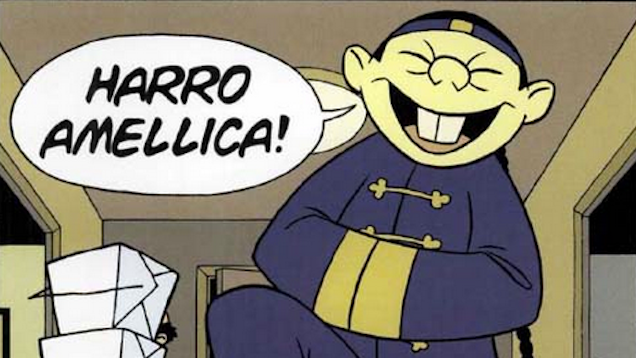 Are Asians apolitical and other musings

I was browsing Facebook when I came across Jesse Watters’ “Chinatown segment” from the O’Reilly Show on Fox News. I had some time so I decided to watch it. As the camera panned to Chinatown, New York, a stereotypical Oriental riff chimed in the background.  Watters’ first words?  “Am I supposed to bow when I say hello?”  …this was going to be fun.

I showed it to my friend and asked her what she thought of it.

“Is he going to get fired?” she asked.

“No,” I said.  “If anything, this will just give him more attention.  His superiors will probably scrutinize his next few pieces more carefully, but that’s it.”

Macro-aggressions: you all don’t belong

I found myself angrier than I normally am over an offensive joke playing on Asian stereotypes.  A lot angrier.  Most of the time, I’m not upset at all.  After all, it’s usually in good fun.  But this was different.  The larger issue is that this segment represented just a microcosm of the discrimination and disrespect Asian Americans and Pacific Islanders (AAPI) and Asians have to deal with in America.  I wasn’t bothered by the childish stereotyping, jokes that I would have found funny in middle school.  It was the repeated insinuation that Chinese Americans, and by extension, AAPI, are ignorant of American politics and are not worthy of being Americans.  It was the crassness of taking advantage of elderly immigrants who don’t speak English and shaming them on national television.  It was suggestion at the end of the segment that most [AAPI] people didn’t “know what was going on.”

Minorities still face much discrimination in the United States.  Blacks are more likely to be pulled over by police or racially profiled in other manners.  Hispanics often face false accusations that they are criminal or lazy.  For AAPI, especially East Asians, discrimination often comes in the form of patronizing directives and the expectation that we are a meek and unassuming people who will comply with orders but have no say in what these orders are.

This past June, I went to a Bernie Sanders rally to learn a bit more about his platforms.  He emphasized that he is the best candidate for minorities. He described how his administration would help African Americans achieve police accountability. He would address Latino immigration concerns.  Native American tribes would receive more funding.  But he decided to completely neglect the AAPI population, a fact not lost on me.  He lost my vote right there.

Two main factors contribute to such lack of attention to issues that AAPI face.  First of all, AAPI are largely underrepresented on Capitol Hill.  They are proportionally the most underrepresented among the four major groups of White, Black, Hispanic, and Asian in the House of Representatives.  Just 2.3% of Representatives are Asian, whereas 5.6% of the U.S. population identify as Asian.  Similarly, just 1 senator out of 100 identifies as Asian.

Secondly, the model minority stereotype is very problematic.  Media perpetuates the idea that Asians are do not face challenges that other minorities often face because of their propensity to do well in school and go on to higher education.  This excellent article by BPR’s Yoojin Shin outlines this uphill battle against expectations.  I asked a friend what are some societal that she found frustrating as an Asian American.  She answered, “People think that my accomplishments are a result of my race rather than all the hard work I put in.”  That is indeed the plight of the model minority.

Because of these, issues at the forefront of AAPI communities are never the first on the table and on the front page.  Since Asians are so successful, they must be immune to ridicule and resistant from mental anguish, right?  Mental health resources targeted toward Asian Americans are pitifully lacking.  Despite over 17% lifetime rate of psychiatric disorders, Asians are three times less likely to seek help than Caucasians.  Since Asians are smart but complacent, we should hire them as workers but not promote them, right? Employment discrimination against Asian Americans at the top form the so-called “bamboo ceiling.”  A report by the Equal Employment Organization Commission, a government agency, pooled together data from Google, Intel, HP, LinkedIn, and Yahoo, and found that while 27% of professionals were Asian-American, just 19% of managers and 14% of executives were.

I know I am not the only one with these concerns. Michael Luo of the New York Times was walking in NYC with his family and some friends when a lady yelled at him “Go Back to China!”  He wrote an open letter to the lady, which garnered widespread attention and dialogue.  He poses, “Are we ever going to feel like we belong?” I’ll answer his rhetorical question. With the current climate, where such rampant discrimination and racism against AAPI is portrayed even in a news network? No.

Micro-aggressions such as these reminded me of an event that transpired a few weeks ago. I was moving things from my car to my apartment, a lady approached me and asked where I was from.

“The Bay Area,” I said without hesitating.

“No, where are you really from? I’m from Brazil,” she offered.

“I’ve lived in California for a long as I remember.”

She was persistent, “Where are your parents from?”

It’s really difficult for me to put into words how frustrating such encounters can be.  She wasn’t menacing or threatening, which is perhaps the worst part.  I can deal with overt racists.  But the fact that she immediately profiled me as “not American” and kept probing me when I insisted otherwise was not okay.  It makes me wonder just how many very nice, accepting people simply do not understand how toxic these seemingly harmless questions really are. It even made me question if my colleagues, friends, and fraternity brothers see me this way as well.

To all you Jesse Watters out there, AAPI are neither ignorant of politics nor apathetic about current events. We know what’s going on, and the color of our skin and the shape of our eyes do not make us any less American that you.  We belong and we’re here to stay. It’s time that we can hold a conversation without being asked “Where are you really from?” It’s time that our accomplishments are appreciated as reflections of individual success rather than presumed as products of racial destiny.  And it’s about damn time that our struggles are no longer trivialized and dismissed.  As for those who don’t give us the credit and respect that we as Americans deserve, well, after all it is “the year of go f*ck yourself.”