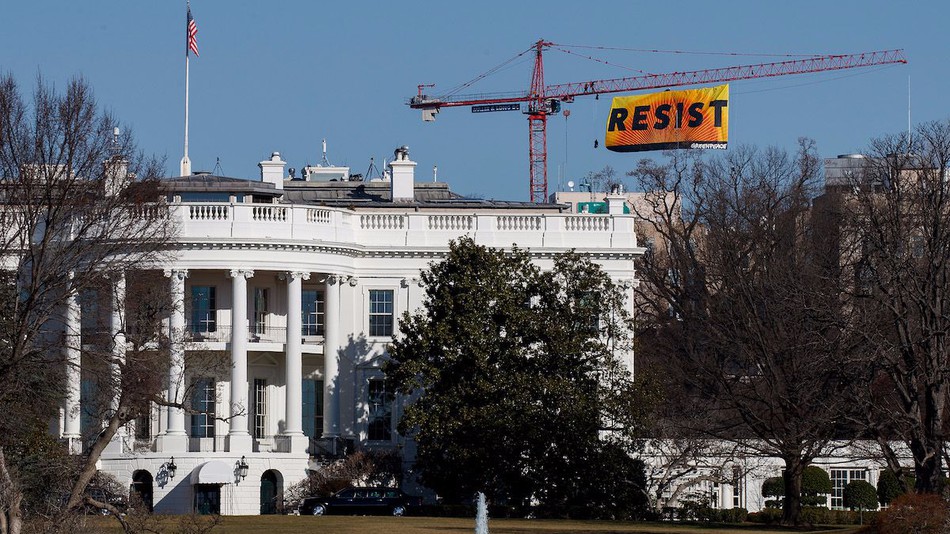 La Resistenza, or the Resistance, were a loose coalition of self-described Italian freedom fighters during late World War II. They fought the occupying Nazi army and the remainder of Mussolini’s Fascists in any way possible. This ragtag group—rogue journalists who published dissenting articles, partisans conducting guerilla ambushes, and communists who spoke out openly, just to name a few—had varying beliefs and likely wouldn’t cooperate under normal circumstances. Circumstances, however, were anything but normal, and the Resistance played a vital role in ending fascism’s grip on Italy.

A new resistance is rising now in America. President Trump has faced opposition ever since he began his campaign with a speech claiming that Mexico was sending immigrants who were rapists, drug dealers, and criminals. Less than two weeks after his inauguration, the president has already seen significant opposition to his agenda. Here are a few of the most notable highlights.

Protests erupted on January 19th as President Trump was sworn in. 51 members of Congress boycotted the inauguration, most notably Rep. John Lewis (D-Ga.), an iconic civil rights activist. Protests broke out in major cities throughout the nation. In D.C., what started off as a peaceful protest quickly turned violent and led to 217 arrests and three hospitalizations, two of which were police officers. Arrests were also made in New York, Dallas, and Portland. Demonstrations against the president also took place across the globe, including London, Hong Kong, and Berlin.

The next day, the Women’s March on Washington took place, where women (and men) took to the streets to voice their opinions on a number of issues, including the possible defunding of Planned Parenthood, the sexual assault allegations facing the newly elected president, and on the values of women’s equality and justice. Crowd scientists estimate that nearly 470,000 people showed up in Washington for the march—over three times the size of Trump’s inauguration—and more than 3.3 million in marches worldwide.

The repeal of the Affordable Care Act (ACA) has also been a hot-button affair, with Congress already taking preliminary steps to repeal the law. Advocates staged a “cough-in” at the Trump International Hotel in Manhattan as part of an effort to raise awareness to the need for accessible health care. Rep. Cathy McMorris Rodgers (R-Wash.) and Rep. Kevin Brady (R-Texas) both faced significant backlash from their constituents while making speeches about repealing Obamacare. Democrats have been quick to pounce, with Sen. Bernie Sanders (I-Vt.) tweeting that 43,000 people would die annually without the ACA and House Minority Leader Nancy Pelosi (D-Calif.) stating that repealing Obamacare without replacing it would “Make America Sick Again.”

President Trump has seen an unprecedented level of resistance to his Cabinet picks, with even the least contentious nominations receiving some form of criticism. In particular, Secretary of State nominee Rex Tillerson, former CEO of Exxon Mobil, has faced scrutiny over his links to the oil industry, his deals that have undercut U.S. foreign policy interests, and his close ties with Russian President Vladimir Putin. Attorney General nominee Sen. Jeff Sessions (R-Ala.) has been haunted by allegations of racism that led to his rejection as a federal judge 30 years ago, and has resulted in the NAACP’s president staging a sit-in at Sessions’ own congressional office. Secretary of Energy nominee Rick Perry infamously forgot the name of the Department of Energy as one of the departments he promised to eliminate if elected during his 2012 presidential campaign. Most controversial, however, is Betsy DeVos, Trump’s pick for Secretary of Education, who has consistently railed against public schools in favor of charter schools, lacks government experience, and claimed guns may be needed in schools against “potential grizzlies.” In addition, she has been widely rebuffed by teachers unions and public school proponents.

As President Trump continues to refuse to take climate change seriously, federal scientists have started to pushback. A group of sixty hackers, scientists, and archivists raced to save invaluable data on the climate recorded by the EPA and NOAA before President Trump’s inauguration, afraid that he would erase the information. After trying to delete web pages on climate change from federal websites (which would later be reversed after public outcry), President Trump issued gag orders that banned employees at the EPA, the Department of Agriculture, and the National Park Service from communicating with the media, only to be defied by the Badlands National Park, whose Twitter account posted evidence for climate change before being taken down. Moreover, scientists have planned their own March for Science, a spin off of the Women’s March on Washington, to raise their concerns for the importance of science in the new administration.

President Trump also reversed President Obama’s decision to halt the Keystone XL and Dakota Access pipelines, reigniting protests that have persisted throughout the Obama administration; Malia Obama, President Obama’s eldest daughter, joined one of these protests shortly after the pipelines were reapproved. But perhaps the most visible sign of resistance was carried out by Greenpeace activists, who hung a giant banner depicting the word “RESIST” on a crane well within view of the White House.

Most recently, President Trump’s action on immigration have created a political firestorm. The president signed an executive order that banned citizens from seven Muslim-majority countries from entering the country for the next 90 days, and suspended all refugees for the next 120 days. Protests across the country have emerged, consisting of civilians and lawmakers. Even fellow Republicans have spoken out against it, with Sen. John McCain (R-Ariz.) and Sen. Lindsey Graham (R-S.C.) publicly opposing the president. Some of the largest technology companies in the world, including Microsoft, Google, and Apple, have denounced the ban. Countries such as Canada and Scotland have promised to welcome refugees in response to the ban, and in what comes as an immediate relief to immigration advocates, the ACLU has won a temporary stay on the detainment of refugees at airports.

The president is only ten days into his tenure, and he already faces extreme amounts of contention. President Trump may have won the Oval Office, but as of now, he is far from winning the acceptance of the American people.