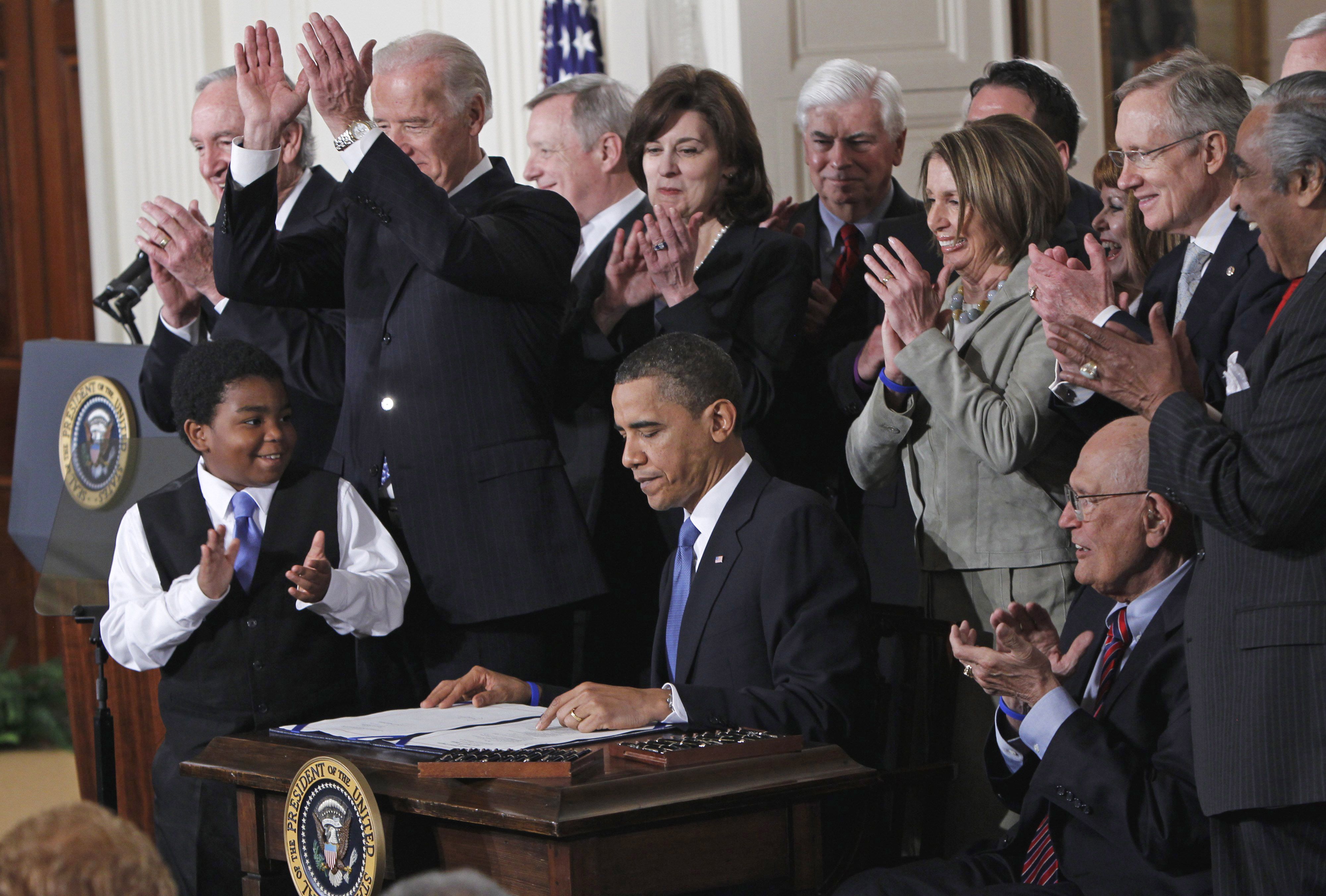 Tried and True? Obamacare and the Nationalization of American Policy

Until the winter of 1917, the hallmark of American government had been limited federal power. With the entrance of the United States into the first World War, President Woodrow Wilson shattered this standard with a single signature. In December 1917, he signed into action the Federal Possession and Control Act, effectively nationalizing the railroad industry in an attempt to meet the rising delivery demands of war. However, his policy was short-lived, and ended in two short years after facing utter failure.

At this point, Wilson established a precedent for encroaching federal power on traditionally privatized industry, an act long advocated for by Progressives throughout the early 1900s.  Shortly after Wilson, Franklin Delano Roosevelt proposed the New Deal, a set of programs specifically designed to employ impoverished Americans suffering from the catastrophic Great Depression, a program made possible by the rising support of Populists, a group that emerged from Wilson’s supporters of railroad privatization.  These programs most notably included the Civil Conservation Corps and the Works Progress Administration.  These programs, though successful in developing infrastructure in the United States, did not lift America out of the Great Depression – the very thing they were designed to do.  While they did temporarily employ eight million people, the great cost of the program could not be maintained indefinitely.  Rather, it took another World War to finally end the Great Depression.

The most recent and highly controversial example of nationalization of industry is President Barack Obama’s universal health care program.  Having run on a platform of “hope” and “change” much like Roosevelt’s promise for a “new deal with the American people”, Obama’s election greatly relied upon his promise to implement a policy of universal health care.

In 2010, Obama’s dream of universal health care coverage passed in the form of the Affordable Care Act (ACA), commonly referred to as Obamacare.  However, from its inception, Obamacare was riddled with controversy.  No one seemed to be pleased with it.  Conservatives feared that Obamacare would be a “job-killer” for businesses; Senator Ted Cruz stated “What is problematic about Obamacare is that it is killing millions of jobs in this country”.  Meanwhile, prominent liberals, such as Bernie Sanders, argued that though the President attempted to ensure health care affordability for even the lowest income workers, Obamacare “does not go far enough”.

Following the 2015 Supreme Court ruling in King v. Burwell finding Obamacare constitutional, proponents of the act hoped that the controversy would finally end.  Conservatives lashed out against the court, particularly against Chief Justice Roberts, a traditionally conservative justice who had sided with more liberal justices in the court’s decision, but the controversy eventually died down.  Obamacare survived.

Recently, the debate over the ACA has been renewed with the release of a statement from the White House announcing that as of 2017, premiums “will rise sharply.”  According to a report released by the Department of Health and Human Services, “the average cost for the benchmark silver plan will experience a 22% hike” and “will cost an average of $296 more per month next year.”  Additionally, the Obama administration reports that some states will now only have one insurance option available to citizens.

As Obamacare’s architect, Jonathan Gruber, likes to point out, the ACA is “working as designed.”  Nonetheless, while the Obama administration continues to argue that Obamacare is alive and well, there is a disconnect between their words and reality, most notably demonstrated by the need for premium hikes.

Outside of the United States, many other developed nations have implemented universal health care.  The nationalization of health care in many of these developed states has been met with great success – countries such as Sweden and Canada are just two examples of highly regarded universal health coverage policies.  When evaluated based on the quality of their health care systems (based on efficiency, equity, and overall citizen health), Sweden is ranked number three and Canada is ranked number ten in the world.  So why has universal health care failed as a system in the United States while other countries with similar policies succeed?

One possible answer can be found by examining the United States’ history of nationalization.  In an attempt to improve national efficiency of the railroad systems after America’s entrance in World War I, Woodrow Wilson nationalized the railroad industry.  Despite Wilson’s intentions, railroads were unable to keep up with demand.  They were marked with greater inefficiency and higher costs, partially driven by Wilson’s campaign to increase wages for unskilled railroad workers.

A main cause of the failure of railroad industrialization was that the federal government was not concerned with profit, unlike railroad companies.  Quite simply, the federal government did not attempt to reduce costs in order to maximize profits, resulting in their newly acquired nationalized railroad industry burdening the federal budget.  The final nail in the coffin for nationalization in this case, however, came about as a result of public opinion.  The public had to wait longer than ever for deliveries of basic goods, an indication of government inefficiency.  From the public perspective, railroad nationalization did not help, but rather hindered their lives.

Examining even more attempts at nationalization such as the New Deal, Medicare, and Medicaid reveals that similar issues plague them all.  Quite simply, America has a problem with nationalization.

Nationalization in America does not work because conformity costs are too high.  In the case of the railroads, it was too difficult for the federal government to meet the demands of various states while also meeting military demands.  In the case of social security, differing states have differing population sizes and differing numbers of retirees, complicating the allocation of spending between states.

In the case of Obamacare, the same issue applies.  States are allocated money by the federal government, but the needs of people in different states differ, as does efficiency of state allocation of funds. Hawaii, for example, outspent all other states in terms of its federal Obamacare funds allocation by nearly 70 million dollars.  With the fewest number of enrollees, at 5,744, the amount of money spent per enrollee was on average, $35,749, nearly 10,000 dollars more than the next highest average spending state and 20,000 dollars more than the third highest.  A chief reason for this discrepancy is that each state differs in demographic and institutional structure.  Each state differs in income, industry, and its ability to implement such a system.  That is why “Romneycare”, a similar policy as Obamacare implemented at the state level (in Massachusetts) was successful, while the ACA has failed.  America is too diverse a nation to attempt to blanket any one large scale policy across all states.

While nationalization in some other countries such as France or the United Kingdom may work, the difference in the United States is the inherent emphasis on the power of states rather than the federal government.  States in America have a long-held tradition of greater political power in comparison to other provinces and regions of different countries, a fact made explicitly clear in the United States Constitution.

The design of Obamacare is not inherently flawed – at least, that is not the reason for its inability to function properly.  Republican Governors who have refused to comply with Obamacare are not at fault either.  Rather, the overarching trend in American history has been that nationalization in America simply does not work.

Historically, attempts to nationalize have often been futile in the United States.  The nationalization of the railroad industry lasted two years.  After the Great Depression was over, the New Deal dissolved.  Most recently, it appears as if Obamacare is threatened as well.  With the election of Donald Trump as President, a man who repeatedly has stated that “Obamacare is a disaster” that “has to be repealed”, and Republican control of the House and Senate, it is speculated that Obamacare will soon be repealed.  If this feat is accomplished, a feat that Republicans have been attempting to achieve since the first day the ACA passed, it would make Obamacare the next in a line of failed attempts at U.S. nationalization for the history books.