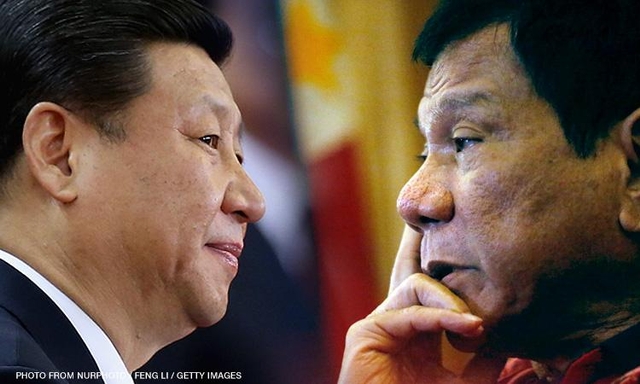 “America has lost,” President Duterte of the Philippines said to China’s top leaders in Beijing this October.

Almost immediately upon taking office in June, Duterte’s presidency has been awash in controversy. His landmark “war on drugs” legitimized the use of excessive violence in the Philippines, resulting in more than 1,400 deaths. The movement has received harsh criticisms from U.S. lawmakers on human rights grounds, only to elicit Duterte’s open defiance, including publicly cursing President Obama. Meanwhile, China has turned a blind eye to the movement, citing its long tradition of not interfering with others’ domestic affairs.

President Duterte is not hesitant in expressing his affection for China. In an interview with China’s state news agency Xinhua, before embarking on his four-day trip to Beijing, Duterte reflected that “My grandfather is Chinese. . . It’s only China that can help us.” Once in Beijing, Duterte’s speeches rejected any uncertainty toward his aversion of the U.S: “there are three of us against the world — China, Philippines and Russia.”

The Philippines and China have faced diplomatic hostility ever since the Permanent Court of Arbitration ruled the South China Sea case in favor of the Philippines, refuting the Chinese claim of historical presence in those waters. However, Duterte skillfully addressed the controversial issue, saying, “There is no sense fighting over a body of water.”

The Chinese side warmly welcomed Duterte with his “make friends, not war” message, providing him unusual access to four members of the powerful seven-membered Chinese Politburo Standing Committee, while Chinese President Xi Jinping personally lauded Duterte’s “milestone” visit. Duterte’s successful trip sealed 13 agreements and memorandums of understanding, secured $13.5 billion’s worth of investments along with a lucrative new friendship with the Chinese, culminating in a final remark that delighted his Chinese hosts: “Your honors, in this venue, I announce my separation from the United States … Both in military, but also economics,” Duterte responded to a thunderous applause, “I will be dependent on you.”

If the Philippines were to detach itself from the U.S. alliance (i.e. rejecting overarching U.S. influence in the country since colonial times), this would almost surely signal a sound setback to the U.S. “Pivot to Asia” foreign policy, a poignant diplomatic rebalance of American attention from the Europe and Middle East to East Asia. The “Pivot” became wide-known after the then Secretary of State, Hillary Clinton, published an article in Foreign Policy discussing America’s “Pacific Century.” From Washington’s longest ally in Asia, the Philippines’ proposed detachment and rebalance to China stunned politicians in both countries and sparked a media frenzy.

Ironically, nobody seems to understand what President Duterte was referring to in his speech. Hours after the remark, the Philippine trade minister Roman Lopez denied the alleged split: “Let me clarify. The president did not talk about separation,” he told CNN Philippines, adding: “We definitely won’t stop the trade and investment activities with the west, specifically the U.S.” Meanwhile, the spokesman of the U.S. State Department, John Kirby, pointed out the confusion: “We are going to be seeking an explanation of exactly what the president meant when he talked about separation from the U.S. It’s not clear to us exactly what that means in all its ramifications.”

Once back in his hometown, Davao, Duterte softened, insisting he did not want to cut economic and military ties with America.

The United States still operates the most dominant security architecture in East Asia: the Hub and Spokes system, a network of bilateral alliance with the U.S. as the “hub” and numerous countries in East Asia as the “spokes,” with the Philippines being a chief component. The network was formed in the post-WWII period and effectively prevented regional multilateral security architecture, like the NATO, in East Asia. In an attempt to deter regional hegemony of any nation in East Asia, the U.S. signed the Mutual Defense Treaty (MDT) with the Philippines in 1951, mandating bilateral defense and military presence in the former U.S. colony.

Duterte’s rise to power mirrors the Filipino resentment of the overreaching American presence in the country, proposing oppositions to the shared security structure. Arguably, the most serious remark made by Duterte is the termination of joint U.S.-Philippine naval exercises, a part of the Philippine-U.S. Visiting Force Agreement (VFA). In an effort to avoid upsetting China, Duterte also wishes to cancel joint naval patrols in the volatile South China Sea. Speaking to an audience of Filipinos in Vietnam this September, Duterte said, “I will serve notice to you now that this will be the last military exercise.”

Still, the lack of explanation behind Duterte’s speech remained confusing, leaving Philippine officials to come up with their own justification. Foreign Secretary Perfecto Yasay told reporters the agreement with the U.S. “will be respected and this is what the president clearly meant.” One Philippine defense official, in an interview, expressed his uncertainty that Duterte fully understand the value of such joint-exercises, “which total 28 and extend beyond just traditional security but also other key areas like humanitarian assistance and disaster relief.”

The Philippine Defense Secretary Delfin Lorenzana, responding to questions at his Senate confirmation hearing, said President Duterte has been issuing statements without consultation with his cabinet. He added that everything in the U.S.-Philippine security cooperation is running as planned: “As of now, there is no decision to suspend training next year, the VFA is still on, everything is going.”

Without the consultation of his cabinet, Duterte speaks only for himself. Thus his messages should not be interpreted as concrete actions to deter American alliance, or to rebalance to China.

In 2015, Pew Research Center released a report that labeled the Philippines the country holding the most favorable view of the U.S. in the world, where an overwhelming 92% of those surveyed expressed favorable opinions. Contrastingly, the percentage of those holding favorable opinions of China sits at a mere 52%. Duterte’s abrupt course-changing alliance with China is essentially contradictory with Philippine’s domestic opinion.

The former U.S. Ambassador to the Philippines, Philip Goldberg, said to a local media organization, Rappler, “We’re not a command kind of economy or government, so we have to think these things through.” He added, “We have certain laws, certain obligations under U.S law to follow.”

The New York Times editorial board wisely noted that “It is not unusual for national leaders to want to set their own paths. Mr. Duterte’s views reflect resentments among some Filipinos that America has not always treated their country with respect.” However, besides the fact President Duterte is a exceptionally nationalistic, bold leader, his rhetoric does not speak for the future Philippine-U.S. alliance. The Diplomat similarly concluded that “irrespective of the fate of this ongoing realignment, observers should be clear not just about the opportunities that are available, but also the limitations that exist.”

Duterte’s anti-American rhetoric, despite its amplified reporting and various implications, speaks only of a shift in ideals in the Philippines’s top leadership. After all, perhaps it is best to attribute Duterte’s words and behaviors to his own character. In President Obama’s words, upon being told of Duterte’s obscene comment to him: “Clearly, he’s a colorful guy.”