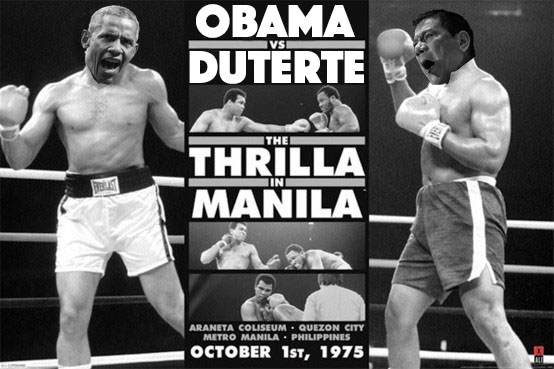 The Thrilla in Manila

Since the recognition of independence in 1946 and the mutual defense treaty signed in 1951, the United States and the Philippines have been staunch allies.  This alliance has included establishing US bases in the Philippines, joint Filipino-American military exercises, hundreds of millions of dollars in aid, and protection under the US nuclear umbrella.  In 2015, a whopping 92% of Filipinos held a “favorable” view of the United States.

The new Philippine president, Rodrigo “Rody” Duterte, appears to be part of the 8%.  Elected on a pledge kill drug dealers and clean up crime at home, Mr. Duterte’s views on the US alliance were not a significant part of his campaign.  But since being elected president he has made his views widely known, stating that, “I [Rodrigo Duterte] will break up with America.”  In just a couple of months, he has stated that he will end joint Filipino-American military exercises; called Barack Obama a “son of a whore”; begun shifting arms purchases away from the US and toward Russia and China; threatened to revoke base-hosting agreements; declined to pursue an international tribunal’s ruling against China in the South China Sea; and made a state visit to China, with whom he hopes to build closer ties.

Until Mr. Duterte’s election that strategy seemed effective.  The United States has been able to count among its friends and allies South Korea, Vietnam, the Philippines, Japan, Singapore, Taiwan, Australia, New Zealand, India, and Thailand.  China, meanwhile, has made few friends in the region, especially with its aggressive actions in the South China Sea.  Besides historical ally and occasional annoyance North Korea, China must often go as far as Africa, where it has rapidly increased aid, to find countries willing to vote with it in the UN general assembly.  Mr. Duterte’s detente with China is an unexpected but not unwelcome coup for Communist Party leadership.  China often complains that the US is trying to “contain” its rise.  To combat this, Beijing has spent considerable effort chipping away at American alliances and attempting to build its own.  The Philippines realignment is the first big break in the American alliance system.

How big a break is unclear.  While Mr. Duterte remains popular at home, so does the United States, far more so than China.  After being elected on his domestic stance toward drugs and corruption, it remains to be seen whether or not Filipinos are willing to follow their president on such a dramatic foreign policy departure.  Many members of the Philippine government have attempted to walk back their president’s statements.  But even if he is unconcerned about his prospects electorally, he still faces immutable realities in the international community.  Most of east and southeast Asia remains wary of Chinese expansionism and continues to court the United States, and Mr. Duterte must still work with them.  While on a visit to Japan he downplayed his rebalancing toward China, saying it was purely economic and not related to security.  Mr. Duterte also faces constraints on his actions abroad in the domestic political sphere.  After basing his campaign on populism and nationalism, he cannot simply capitulate to Chinese demands, particularly in the disputed South China Sea.  Polling data suggests more than 90% of Filipinos are either “very concerned” or “somewhat concerned” about China’s territorial ambitions in disputed waters.

Where Mr. Duterte’s mercurial personality and opaque strategy will take the Philippines is a mystery.  He may be planning to play America and China off of each other to drum up Chinese investment and American aid money; his trip to Beijing has already netted $9 billion in low-interest loans for his poverty-stricken nation.  He may believe re-aligning with China will get him a preferred position with a rising power that outweighs the loss of U.S. support.  Or there may be no deeper strategy at all.  Mr. Duterte has a long history of short temper, wild outbursts, and a long list of complaints against the U.S. for real, perceived, and suspected slights and incidents dating back to 1898, when the U.S. acquired the archipelago as a Spanish concession in the Spanish-American War.  He was mayor of Davao city, located on the Philippines southernmost major island Mindanao, where insurgent movements have simmered for decades and resentment towards the United States dates back to the violent takeover of the area after the Spanish surrender of the territory.  Mr. Duterte may simply be acting on personal, regional, and historical grievances that seem to matter far more to him than to Filipinos at large.

Despite international condemnation, Mr. Duterte remains wildly popular at home even as he is scorned abroad.  Successive presidents may or may not walk back his foreign policy choices.  But it is clear that, for now, the Philippine row represents a significant blow to President Obama’s Pivot to Asia.  China, meanwhile, can celebrate one of its first major successes in pulling regional powers away from the US sphere of influence.  Time will tell whether or not the celebrations are premature.