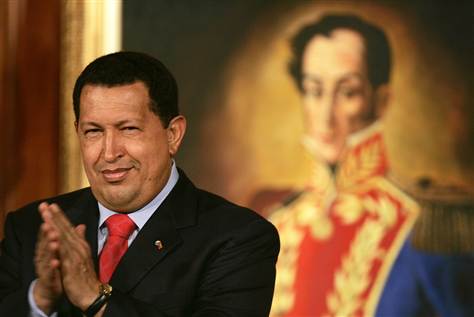 Bolivarianism: A Fanfare for the Common Man?

Hugo Chávez clapping in front of a portrait of Simón Bolívar

Not long ago, Venezuela sought to brand itself as a leader, a resurgent power eager to lead the escape from U.S. imperialism towards true Latin independence. With a new constitution and the charismatic Hugo Chávez at the helm, Venezuela underwent extensive political, economic, and social restructuring as the government attempted to use socialism to escape the economic and political morass of the 1980s and ‘90s. In justifying his path to the Venezuelan people and the world, Chávez had no greater weapon than his shiny, new ideology: Bolivarianism.

Bolivarianism is a direct claim to the legacy of the great liberator, Simón Bolívar, who led the nations of Colombia, Venezuela, Panama, and Ecuador out from the darkness of Spanish Imperialism. At its core Bolivarianism is a mix of pan-American, socialist, and democratic ideals fixed against the injustices of imperialism, inequality, and corruption so common to the Latin nations. Instantly popular, Bolivarianism was an essential ideological tool in Chávez’s search for support and legitimacy for his revolutionary programs. In recent days, however, Bolivarianism has fallen out of favor. Since the death of Chávez and the accession of his hand-picked successor Nicolás Maduro to the presidency, Venezuela has floated from crisis to crisis as falling oil prices have led to economic collapse, and the government has become the target of widespread discontent for its handling of corruption and democracy.

Looking back, the Bolivarianism of the 2000s seems like a golden age. Even

farther back, however, is the Bolivarianism of Bolívar himself. Coming into the spotlight in the 1810s, Bolívar “the Liberator” was an immensely powerful figure whose beliefs and actions dramatically shifted the course of Latin American history. Unfortunately for Chávez’s Bolivarians, Bolívar’s Bolivarianism is characterized by violence, authoritarianism, regional imperialism, and the ever-present specter of capitalism, not the egalitarian principles of Chávez and his socialists.

Simón Bolívar was born in 1883 to a military family in the Creole aristocracy of Caracas, and grew up privileged in both education and wealth. When he was 16 he was sent abroad to Europe, like most nobles of his day, to learn from the great philosophers of the age. In Europe during the French Revolution and the Napoleonic Wars, Bolívar was exposed to the Enlightenment ideals of freedom and equality, to which he was an easy convert. Incensed by the wrongs of Spanish Imperialism, Bolívar returned home to lead three separate republican wars and finally achieve Venezuelan independence in 1818. But Bolívar wasn’t finished and he continued to wage war, fighting short, successive conflicts that by 1825 had liberated Colombia, Panama, Ecuador, and northern Peru from Spanish rule. He christened this enormous new state “Gran Colombia”, becoming its first president.

While Bolívar’s story seems heroic on the surface, it doesn’t represent the man’s true beliefs. Bolívar “the Great Liberator” was never a huge fan of democracy, believing it to work better when tempered by a strong hand. It should come as no surprise that Bolívar was in essence a dictator throughout the entire period of his rule, exercising complete control over every facet of the state. This dictatorial tendency came to the fore in the constitution of 1828, proposed by Bolívar to remedy the problems of a failing Gran Colombia. The new charter sought to enshrined a lifelong presidency with strong central power but was rejected by the constitutional assembly. No matter for Bolívar, who took matters into his own hands by declaring himself dictator under the “Organic Decree”.

Just as Bolívar was no Bolivarian democrat, he was no socialist either. While Bolívar did emancipate slaves, he was wholly unconcerned with the issues of wealth distribution or class inequality so central to modern Bolivarianism. He was no different from many other elites during the Enlightenment, a time when ideas were formulated primarily by and for the elites, who were the driving forces behind the major revolutions in Venezuela, France, and elsewhere. In terms of rights, representation, and welfare, little changed for most people as a result of Bolívar’s wars of liberation.

Ironically enough, Karl Marx himself once wrote an article entitled “Bolívar y Ponte” in which he describes Bolívar as a Latin Napoleon, with the same bourgeois, imperialist aims as any other member of the privileged classes. The establishment of Gran Colombia merely replaced one imperial power — Spain — with another, Bolívar. Taking into account the immense violence and destruction cause by his wars and policies, Bolívar begins to look far less “Bolivarian”.

But Chávez was undeterred. Bolívar was the man, the myth, the legend, and attaching his name to a powerful symbol was a simple way to gain legitimacy. Bolivarianism was soon applied to anything and everything. Throughout the 2000s, Chávez aggressively pursued domestic programs of land reform, wealth redistribution, socialization of healthcare, and expanded public education, all in the name of a Bolivarian revolution. In foreign policy, the newly renamed “Bolivarian Republic of Venezuela” sought to spread pan-Latin sentiment and forged close ties with the socialist governments in Nicaragua and Bolivia, while actively opposing the United States and financial institutions like the International Monetary Fund and the World Bank. Chávez was known as a price hawk in the Organization of Petroleum Exporting Countries (OPEC) oil producer cartel, arguing strongly for production quotas and high oil prices in order to invest in the Venezuelan economy.

The breadth and significance of these reforms cannot be understated: this truly was a social, political, and economic revolution. Chávez understood, however, that the reforms he proposed couldn’t pass easily. In order to circumvent these difficulties, Chávez appealed to the cult of Bolívar, characterizing himself as his second coming and the representative of the disenfranchised masses. Chávez was able to construct a populist movement around the Venezuelan identity with the cult of Bolívar at its core.

When the politics of Chávez came to represent what it is to be Venezuelan, opposition to Chávez became opposition to Venezuela itself. In framing the discourse like this, Chávez appealed to populism and nationalism, dividing the country into “us” and “them”. Chávez made opposition to his rule politically unfeasible, pushing through his reforms through with the overwhelming weight of the public behind him.

The “golden age” of Bolivarianism ultimately came to an end with the death of Chávez in 2013, presaging a period of great strife and instability under his successor Nicolás Maduro. Whereas Chávez had initially come to power with the support of the people, Maduro was a handpicked successor relatively unknown to the public until his appointment as Vice President in 2012. Chávez relied on his populist rhetoric and charisma for the popular support, but Maduro could only appeal to the memory of his predecessor. With no strong orator to keep the Bolivarian ideology alive, the movement began to fade and the political tide turned against the government.

In the end, the movement for the people has led to nothing but pain for the average Venezuelan. In the past two years Venezuelans have seen rampant inflation destroy their life’s savings, hospitals run out of life-saving medicine, and basic goods like diapers become so scarce they have to be smuggled in from Colombia. All the while, Nicolás Maduro is abroad negotiating oil prices with OPEC and the opposition is busy denouncing his government for orchestrating a coup. Much like Bolívar, Chávez brought revolution to Venezuela with his radical ideas and strong leadership only to leave the scene with his dream for the country on the brink of ruin. Whether you’re socialist, Bolivarian, or capitalist, in Venezuela’s current state the greatest casualty is the common man.