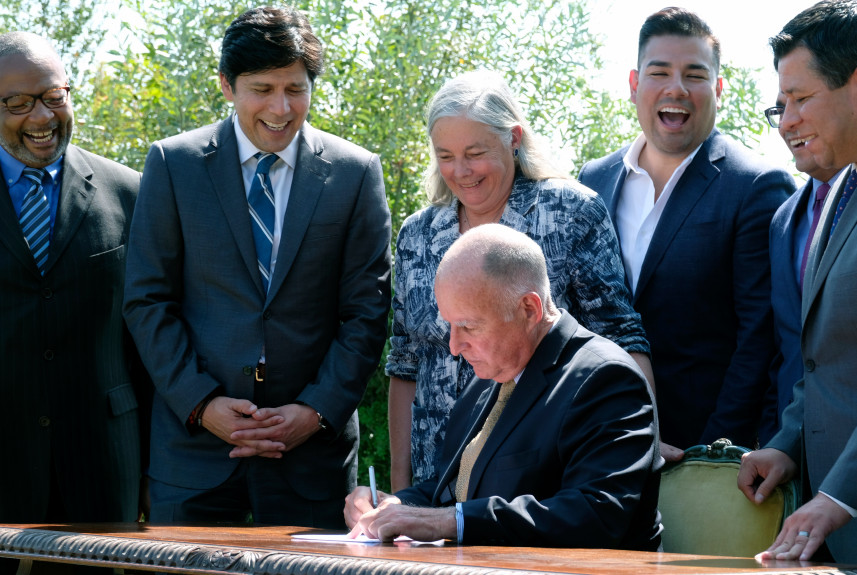 In the summer of 2016, the United States Congress adjourned for an unusual 7-week recess, leading to ferocious criticism from critics—often left-leaning—that Congress perpetuated its own reputation for gridlock and ineffectiveness. But while the Senate and House chambers in Washington were closed, 2,700 miles away in Sacramento, the California state capitol was abuzz with activity. Governor Jerry Brown and the California state legislature were at work, adopting numerous measures that significantly advanced the agenda of the Democrats who control the legislature. Especially after Governor Brown signed Senate Bill 32, which mandates greenhouse gas emissions in California to be reduced 30% below their 1990 levels by 2030, the Democrats’ momentum seemed truly noteworthy, encouraging the notion that 2016 could go on record as a year marked by far-reaching progressive policies similar in vein to President Lyndon B. Johnson’s Great Society programs.

But while Democratic lawmakers bask in their collective triumph over a “spectacular year”, there is some concern that this momentum is temporary, fueled merely by the rush of an election year. After November, there is no guarantee that 2017 will also be as “spectacular” especially if the ideological and partisan makeup of the Assembly and the Senate were to suddenly change. Though it’s unlikely that Democrats will lose their hold on either chamber, this trend could stall if there is no electoral pressure to compel lawmakers into passing sweeping bills, especially the ones that would meet the fiercest opposition from interest lobbies and California Republicans.

It required a great deal of maneuvering and countering the oil lobby for the State Senate to pass SB 32, and the possibility for additional sweeping measures to be adopted is even lower. Even with considerable public support for certain policies, there is no guarantee that those proposals will go very far without being trounced by well-funded interests. If an example is needed, look no further than Proposition 61, which proposed the implementation of a price cap on certain prescription drugs and whose opposition is out-raising its proponents nearly 10 to 1, due almost entirely to contributions from pharmaceutical firms, like Amgen and Pfizer.

It can be easy to take for granted California’s reputation as a left-leaning state, but to do so would be to willingly neglect periods in California’s history conservatives controlled the state’s political direction, even as recently as 2010 when Arnold Schwarzenegger (R) was still serving as governor. Only now has California become one of the few states where the executive and both chambers of the legislature are controlled by Democrats, a makeup that left-leaning voters hope to emulate, a bit wishfully, in Congress and across the other 49 state legislatures. At such a critical juncture in national politics, California Democrats and liberals would not be wise to take their relatively stable position for granted. In many other states where Democrats are in the political minority, the gains made by California Democrats are but pipe dreams that would be swiftly trounced if they were ever to come before a vote. In 2016 especially, Americans saw firsthand the changes that state and local legislatures are capable of, the most glaring example being North Carolina’s House Bill 2, which, after passing through a Republican-controlled legislature, mandated that patrons use public restrooms that correspond to the gender they were identified with at birth, bringing attention to the civil rights violations that transsexual men and women face.

But for many states, the progressive reforms passed in California cannot be replicated as a matter of public opinion or even financial capability since fiscally liberal laws generally require increases in government spending that many states cannot incur, but which California can. With an economy that currently stands among the top ten in the world, California is in a fairly stable fiscal position to implement far-reaching laws. The starkest example from this year is the Fair Wage Act (#15-0032), which Governor Brown signed in early April to increase the state minimum wage to $15 per hour by 2021. When the California legislative analyst’s office released its report on the fiscal impact of the law, it concluded that implementation of the law would result in an “increase in state and local government spending totaling billions of dollars per year”, as well as highly likely increases on prices and revenue taxes for minimum-wage earners. This is a position of great privilege, one that many Californians perhaps do not always consider.

This recent wave of fiscally and socially progressive laws may well be a response to nationally shifting public opinion on many issues. But it is just as much a response to California’s rapidly changing demographic composure. As the population of minority groups grows, they have come to demand more representation. For example, as Hispanic and/or Latino residents have come to claim nearly 39% of the state’s population, several measures have either been proposed or enacted that target issues and challenges that many of them face, such as bilingual education in public school classes and most significantly as of late, overtime pay for farm workers who work more than 10 hours a day or 60 hours per week. As different sections of society are pushing for increased representation in the corridors of power, incumbent representatives and policymakers in California must choose whether to address the growing concerns of those Californians, and effectively follow the state’s increasingly liberal political direction, at least as it looks now. This is not to say that conservative and moderate politicians and citizens have no place in the California of 2016 and 2017; rather it is a reality they must come to terms with and figure out where they stand.

As American history has often proven, political attitudes can shift from generation to generation. The liberal consensus of the 1960s and 1970s flamed out in the face of public opinion that favored the conservative revolution promised by Ronald Reagan and Newt Gingrich in the 1980s and 1990s. If we use that history as a guide, the state’s political direction is not as certain as it seems. It is up to California voters to decide whether this wave of liberal measures are an anomaly, or a shift in public opinion that can be replicated beyond 2016.