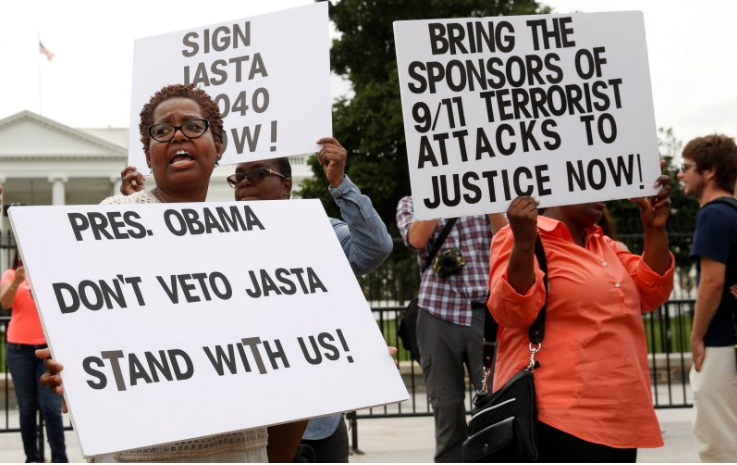 Justice Against Sponsors of Terrorism Act: The Bad and the Ugly

Advocates of the Justice Against Sponsors of Terrorism Act protest President Obama’s veto outside the White House.

Stephanie DeSimone was pregnant when her husband, Navy Commander Patrick Dunn was killed at the Pentagon in the September 11 attacks in 2001. 15 years later, in 2016, DeSimone filed a lawsuit against the Kingdom of Saudi Arabia. Congress’ decision to override President Obama’s veto of the Justice Against the Sponsors of Terrorism Act (JASTA) paved the path for DeSimone to sue Saudi Arabia for wrongful death and deliberate infliction of emotional distress on behalf of her daughter and herself.

JASTA is a bill that amends the Foreign Sovereign Immunities Act to allow American citizens to sue foreign governments for monetary compensation for damages resulting from acts of terrorism committed in the United States on or after September 11, 2001. JASTA would effectively allow families of 9/11 victims like DeSimone and her daughter to bring the Saudi Arabian government into domestic U.S courts for a trial.

This is the first time in Obama’s eight year presidency where Congress overrode the President’s veto. Congress passed this bill due to intense pressure from families of victims of 9/11. The Senate voted 97-1 in favor of the override which far surpases the two-thirds majority needed to override a presidential veto. From an idle bystander’s point of view, it may seem strange that a bill that potentially provides reparations to those who suffered from terrorist activities is not receiving the President’s support. However, the matter of taking a government to court over a lawsuit opens a can of legal worms that could devastate the United States.

Outrage from families of 9/11 victims ensued upon President Obama’s veto. Many saw Obama as being the unintentional defender of Saudi Arabia. However President Obama expressed his views in a CNN interview, stating “If we eliminate this notion of sovereign immunity, our men and women around the world could potentially start seeing themselves subject to reciprocal laws. The concern that I have has nothing to do  with Saudi Arabia per say or my sympathy for 9/11 families, it has to do with me not wanting a situation in which we’re suddenly exposed to liabilities (…)  and then finding ourselves subject to lawsuits.” Sovereign immunity is the legal concept where a government is immune from lawsuits and other legal actions unless they consent to it. Under the United States Constitution, the U.S government is protected from lawsuits. However under the imposition of JASTA, President Obama is worried that the protection offered by sovereign immunity will slowly erode, thereby putting U.S personnel,  American assets and foreign holdings of American businesses at risk.

In addition to the numerous issues JASTA raises within the U.S courts, it also compromises American foreign relations with Saudi Arabia. The Saudi government tried to stop the bill from passing through lobbyists and various contacts. Additionally, they released a white paper detailing the nation’s counterterrorism efforts to deflect any assumptions that the Saudi government was involved in the September 11th attacks. After Congress passed JASTA, the Saudi government warned that they would take action by selling billions of dollars of U.S assets for protection against the lawsuits. This could potentially start a deluge of economic and political tensions between Saudi Arabia and the United States. The American government has a vested interest in oil production in Saudi Arabia and allowing U.S private citizens to sue the Saudi government will not bode well with the Kingdom.

Despite the issue of sovereign immunity and the potential political tensions with Saudi Arabia, Congress decided to override President Obama’s veto. A reason why Congress decided to take this action for the first time in eight years could be because of the upcoming elections. As Obama put it, “If you are perceived voting against 9/11 families right before an election, not surprisingly that’s a hard vote for people to take but it would’ve been the right thing to do.” This points out another reason why JASTA was detrimental to the United States. A bill having serious international legal repercussions being voted upon and passed solely to boost one’s electability perfectly illustrates how perceived image is valued more than welfare of citizens.

JASTA embodies the type of policy-making that neglects to consider long term effects. While the premise of JASTA was to provide a form of compensation to families of 9/11 victims there exist other means to receive compensation, for example through the Victim’s Compensation Fund. Furthermore, it is illogical to pass a bill that may give reparations to some families while simultaneously risking the stability of the American government if they are constantly being dragged to court.

Politics should be rooted in service and helping the greater public: “Sometimes you have to do what’s hard and frankly I wish Congress here had done what was hard.” Obama asserts this idea of policy-making being a tool in serving the community. JASTA undermines this notion, placing political favorability over security and societal well-being.