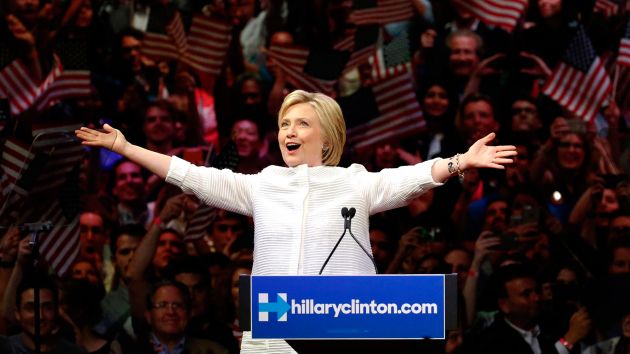 In the February of 1942, a mere two months after the attack on Pearl Harbor, 127,000 people of Japanese descent were rounded up from all along the west coast, and were subsequently marched into American internment camps. Though these individuals included fathers and mothers, sons and daughters, from a myriad of backgrounds, they shared one common characteristic: they were perceived as “un-American.”

FDR ordered the internment based on the suspicions that many people held after Pearl Harbor—that Japan had planted spies in the US. While the soldiers who corralled thousands of innocents into pens were the instruments of this injustice, the true mechanism by which internment became possible was the painting of Japanese-Americans as “non-citizens”—as individuals whose very existence stood opposed to what the US represented. Today, in the 2016 national election, a similar unleashing of nationalistic rhetoric is being employed, namely by the Democratic Nominee Hillary Clinton.

Of course, Donald Trump is also severely guilty of employing nationalistic rhetoric which demeans and “otherizes” various populations. His comments equating Mexican immigrants to criminals and rapists, his recently-abandoned attempts to claim President Obama was not a US citizen, and his uninformed desire for militaristic expansion are all testaments to this fact.

However, all of these aspects of Donald Trump’s campaign are well documented, with the mainstream press reporting on every word and phrase Trump says to further tear him down. At this point, those who still support Trump are those who are aware of his comments and dangerous rhetoric, and either don’t care or are more interested in a specific issue which they believe he can uniquely provide for.

What is far less covered, and in fact practically ignored in this election cycle is the far subtler, yet similarly potent use of nationalistic rhetoric employed by the Clinton campaign. Specifically, the Clinton campaign has—knowingly or otherwise—painted Donald Trump and his supporters as un-American, and has suggested that everything Trump stands for is in direct opposition to what America values (both now and in the past).

This phenomenon is difficult to pin down to specific comments, as it is constructed by the usage of less overt, more digestible diction designed to raise fewer eyebrows than Trump’s bombastic ravings. Specifically,  Clinton has attacked Trump for criticizing American exceptionalism, linked him to foreign adversaries (most notably Vladimir Putin), and labeled his rhetoric un-American. Similarly, in his endorsement of Clinton, President Obama also asserted that Trump was un-American by virtue of his character, values, and temperament.

This rhetoric is dangerous for a myriad of reasons. Firstly, it implies that to subscribe to any of Trump’s ideas is to be isolated from true American values. In reality, however, much of Trump’s derogatory dialogue harkens back to the values which defined America in the past, and permitted institutions like slavery to exist. Looking back at the country’s dark and divided history, it seems as though Trump is in many ways very “American.” Saying that Trump doesn’t represent America is to deny this difficult past, which is incredibly dangerous when coming from the woman who may end up deciding how best to shape our society for the future. Secondly, Clinton’s suggestion that Americans are uniquely powerful and bear a unique capacity to combat demagogues insinuates that other nations are either unwilling or incapable of combating similar figures on their own. This notion has been used to justify detrimental American intervention in the past, such as in Libya (which Clinton endorsed). Thirdly, it rallies Americans against Trump (and, more problematically, his supporters) as an outlier group to be expunged, in many cases resulting in violence.

This rhetoric is uniquely problematic coming from Clinton or Obama, as they are far more likely to be taken seriously by the population at large than Trump when he makes similar arguments. The media has helped tremendously in this respect. While Trump’s nationalistic rhetoric has been almost universally condemned by most mainstream media, Clinton and Obama’s comments are reported without negative overtones, and often are described by the media as encouraging, smart, and even powerful. Whether or not one believes in a general liberal bias in media (which is another debate for another time), major media outlets have spoken: Trump’s nationalism is condemnable, and Clinton’s is empowering.

I can already hear Clinton supporters’ outraged responses to this observation: “Trump deserves it! He did say all those things! Clinton is merely pointing out all the bad things he said!” Yes. Exactly. Trump deserves it, or at least, that’s what this rhetoric feeds upon. It’s almost certainly the rationale used by those who have attacked Trump supporters at various rallies. While Trump supporters are certainly no strangers to violence, observers have shown no hesitation in linking his supporters’ actions to his rhetoric, whereas no such link has been attempted with Clinton’s rhetoric and her constituents (though recently, leaked information shows that the Clinton camp had actively tried to incite violence at his rallies).

In this way, Trump, the ideals he represents, and his supporters have become universal punching bags, where nearly any response—however violent—is justified and glorified by powerful nationalistic sentiment which permeates much of American society. Attacking Trump and his supporters, according to the implications of Clinton’s rhetoric, is no longer justified or moral—it is a “true” American’s duty, and is everything that America stands for.

Certainly, Trump deserves to be decried for his absolutely reprehensible remarks pertaining to women, the disabled, and a disturbingly wide-variety of races. Yet, there is such a thing as crossing a line when dealing with Trump. Unleashing nationalist sentiment in any context is highly dangerous, and harkens back to the Bush era motto of “either you’re with us, or you’re with the terrorists,” which launched a full-scale witch hunt against Muslim Americans, and embroiled the US into a war on terror which shows little signs of slowing down after 15 years.

Both Clinton and Trump have been using nationalism and American exceptionalism to incite hatred, ignorance, and even violence towards their respective opponents. While we can quibble over who is more direct or visceral (which would be a short argument, given Trump’s track record), it is undeniable that we have only identified half of the problem. Both Clinton and Trump must be cautioned against unleashing nationalism, and condemned for its usage. Until such a rejection becomes commonplace, the political escalation of this electoral cycle will continue to spiral out of control, and more violence is likely to follow.