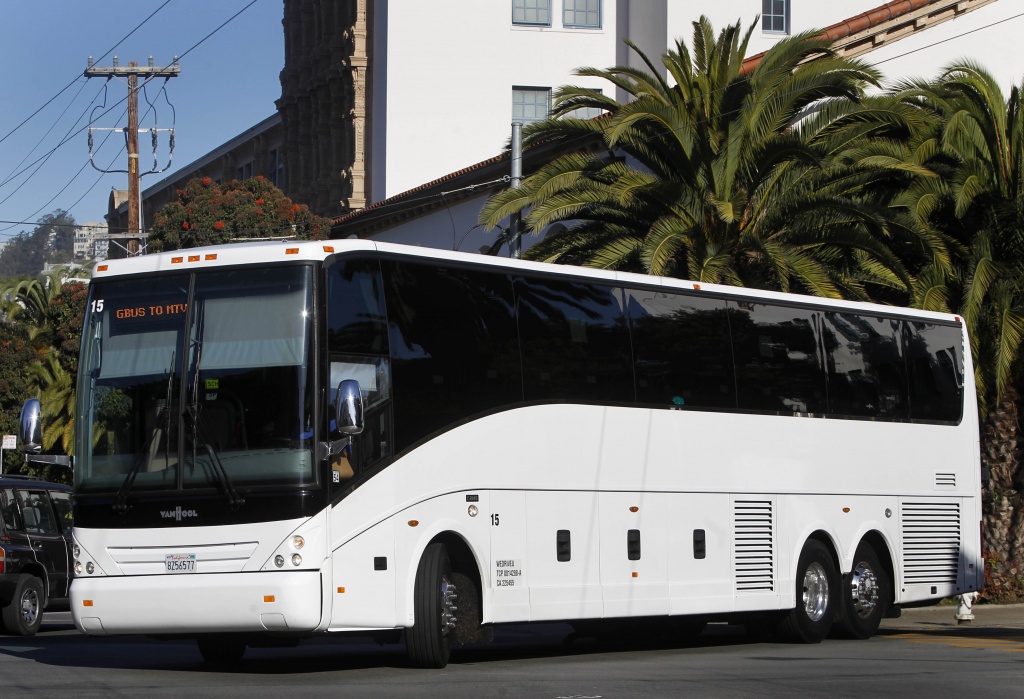 You might have seen them– sleek, white buses with tinted windows, cruising up and down Highway 101. Or perhaps you noticed one along Market Street, pulling over to accept a herd of young professionals juggling cups of fair-trade coffee and MacBook Pros. Or maybe, if you live further south, you’ve been able to see one release its riders at the campus of Google or eBay or Apple.

As Bay Area streets have become increasingly congested, and conventional forms of public transportation remain insufficient, Silicon Valley’s biggest companies have turned to new forms of transit to get their increasingly San Francisco-based workforce into the office– private “Google Buses”, featuring amenities like free Wi-Fi, air conditioning, and convenient stops throughout San Francisco. At first glance, this plan makes perfect sense– tech workers can use the hour-long commute to catch up on emails, finish up projects, and prepare for the day so they arrive at work primed for productivity. In addition, the lines run straight to the offices, unlike the Caltrain trains or bus systems. And, of course, the buses are free for the riders.

However, these private charters have not come without conflict. The tech shuttles have previously used public bus stops, leading to congestion, and have damaged streets not intended for their weight. Many San Francisco residents also use the buses as another example of the growing wealth disparity in the Bay Area– as the commoners stumble out of worn-out MUNIs, the tech elite are shepherded to their destinations in luxury. The buses are simply the next wave in a never-ending process of gentrification, accompanied by organic markets and eviction notices.

Public transit agencies have also clashed with the tech sector over the buses. In 2014, the SFMTA began mandating fees for the use of public bus stops by the private charters. In addition, Caltrans has prohibited the largest buses from driving on streets not delegated as “high-volume”, limiting road damage. But no regulations have been able to slow rent increases in San Francisco, even as UC Berkeley researchers have shown that private bus stops increase nearby rent prices by up to 20%. Nonetheless, the rent increases engendered by the tech shuttles are simply emblematic of the larger issue of affordable housing that plagues the Bay Area. As San Francisco’s population grows, city government finds itself unable to ensure that people of all income levels have equal opportunity to housing. And as those earning the lowest incomes are turned out of their homes, the ranks of homeless described by the San Francisco Chronicle as “a civic disgrace” only swell.

However, city government is not powerless. Many of the difficulties of building affordable housing in San Francisco stem from the city’s zoning code, which bans high-rises from certain districts and neighborhoods. Allowing developers to build denser apartments, while also passing legislation requiring more new developments to provide affordable housing, would both enable more low-income people to live in San Francisco and help reverse the constant increases in rent by lowering land value. Or, perhaps, the San Francisco county government could work alongside other counties to incentivize the construction of both expensive condos and affordable housing in other Bay Area cities, reducing the need for construction of both in the city itself. Methods such as these which promote affordable housing have worked elsewhere, after all. Cities such as Austin, Texas and Denver, Colorado have found success creating public housing, as publications like The Atlantic have pointed out. However, these successes are often drowned out by horror stories about “the projects” and other such civic failures.

Regardless of the method, the mere fact that renting a one-bedroom apartment in the City costs an average of $3500 a month means city government has a civic duty to provide more affordable housing. San Francisco cannot survive with a population consisting entirely of rich condo owners– it needs a working class to continue providing the basic services that keep our society running. In addition, suggesting that those unable to afford their homes in the City should move elsewhere is not just morally wrong, but unfeasible. Almost every city with median apartment rents under $2000 in the Bay Area are so far away, commuting to San Francisco would require taking Amtrak; among the few close enough to take BART, such as San Leandro, thousands of people compete for only a few hundred apartments. In addition, working class individuals who have found housing often clump together– according to an investigation by Curbed San Francisco, 60% of service-class workers live in majority working-class neighborhoods, while only 16.5% of San Francisco’s population is working-class. This model is not just unsustainable– it’s unacceptable, and yet it is our reality.

In the meantime, the expense and allure of living in San Francisco means the Google Bus will live on, an ode to a city struggling to adapt to the gentrification, homelessness, and influx of tech workers that have marked the last few years. And until solutions are found to these crises, the buses will cruise on, shepherding the tech elite away from the commoners.