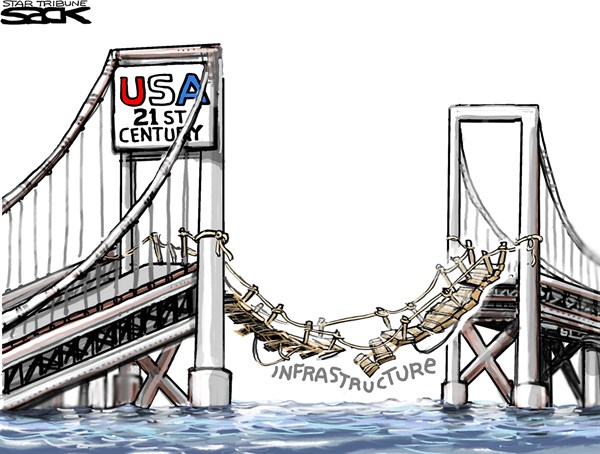 Who Will Rebuild America?

Infrastructure has always been used to build up the United States. Though the Great Depression was a time of loss, President Franklin Delano Roosevelt embraced the opportunities it presented. He took bold strokes to better the United States  through public works projects, which strengthened America’s infrastructure and economy. A few decades later, President Eisenhower continued this legacy of building up the country when he signed the National Highway Act into law in 1956, leading to the construction of roads that linked the nation together coast to coast. Though America has a history of investing in strong and forward-thinking infrastructure, the US now faces a much different situation. In the 2013 Report Card for America’s Infrastructure, the United States received a D+. Given the current state of our infrastructure, it has become an important issue in the 2016 election. Both Clinton and Trump have both talked about increasing investment infrastructure throughout their campaigns, yet their overall plans differ. To really bring infrastructure in this country up to par, both sides of the isle need to agree to make this issue a top priority and give it the funding it needs.

To fully understand this D+, it is important to  first learn who comes up with this grade and what the rating means. The American Society of Civil Engineers (ASCE) determines the grade, which raises some red flags. Some argue that  the ASCE is biased because civil engineers stand to profit from the repairs they say need to occur. Though the ASCE does stand to gain from these projects, it is also composed of the nation’s infrastructure experts, making it the most qualified group to make this assessment.

Regardless of the exact measure, the nation still indisputably has an  infrastructure problem. There are currently 70,000 bridges in this country that have been deemed structurally deficient by the US government and the US are ranked 11th in world in by the World Economic Forum in terms of overall infrastructure, below nations like the UK, Spain Singapore, and the United Arab Emirates. The ASCE analyzes all aspects of the nation’s infrastructure, including ports, rails, and schools and grades infrastructure based on seven basic criteria: capacity, condition, funding, future need, operation and maintenance, public safety, resilience, and innovation. It is important to note that since 1998, the United States grade has never risen above a D. The ASCE then averages the grade that different types of infrastructure get in different categories to determine the national grade. This means that the amount of money being put into programs heavily factors into the grading system. Given the constant flow of money that is necessary for infrastructure to be properly maintained, this is a fair way to measure the quality of US infrastructure.

Hillary Clinton and Donald Trump have attempted to address the current state of infrastructure.Both candidates have put out plans detailing their proposed solutions. Clinton plans to spend $275 billion over five years, $250 billion of which would go directly into public investment. The other $25 billion would go toward the creation of a national infrastructure bank which would aim to lend another $250 billion out to public and private entities to rebuild infrastructure, meaning that her plan results in about $500 billion in infrastructure spending. CNN has described the bank as a “public-private partnership where the government puts in some money and private investors put in the rest.” She also plans to cut red tape and increase accountability in these projects to bring down costs. Though she has been very specific on the details of her plan, Clinton is fairly vague about how she is going to pay for it. She has simply stated that she will get the money through business tax reform, but has not said much more than that.

Donald Trump’s infrastructure plans are far less concrete than Clinton’s. On his official website, he says very little about infrastructure, only briefly mentioning new energy infrastructure in his plan to create 25 million jobs. However, he has made comments during interviews and speeches that outline what his infrastructure plan may be. According to CNN, he has said that he plans to spend twice as much Clinton. The Washington Times claims that Trump will pay for the plan by allowing “companies to repatriate capital from abroad at a low tax rate,” meaning that he would allow companies that have been storing money in a different country to bring their assets back at a low tax rate, and any money earned from this tax would go toward infrastructure. Trump has yet to put a number on this tax, making it impossible to know whether or not it would generate enough revenue to fund his plan. The Washington Times also claimed that he plans to allow private commissions to decide which projects will get funding, meaning that the government will have to still pay for projects that it will have no say in  choosing. This could potentially lead to projects that benefit a few individuals instead of the public as a whole, given the profit-based interests held by many in the  private sector.    On the whole, Trump has said very little about infrastructure other than that he plans to invest a large amount of money in it.

At this point, Clinton seems to be the candidate who will best be able to rebuild America’s infrastructure given the depth of her plan and commitment to this issue. In fact, infrastructure reform is one of the few things that Clinton has said she wants to get done in her first ninety days in office, showing her dedication to this issue.  Her plans to invest, cut down on red tape, and create an infrastructure bank will help to lay a good foundation for future infrastructure projects. Until Trump fully lays out his plan, it is hard to truly compare the two. With less than fifty days until the election the only details about his plan that he shared on his website are that it will “will provide the growth to boost our infrastructure.”

Recent history shows that increasing investment in infrastructure can cause positive change. Since the 2009 report card, the national grade has gone from a D to a D+ and no grade went down, meaning that between 2009 and 2013, only improvements were made. President Obama’s increased investment in helped to improve the grade. Part of the 2009 stimulus package went into infrastructure projects.

Some who are in favor of increasing spending argue that neither candidate’s plan goes far enough. Though estimates on the current infrastructure spending deficit vary, the ASCE claims the US needs to spend an additional $1.6 trillion. Neither candidate proposes spending this much money, likely due to the unpopular tax increases that it would require. Traditionally, infrastructure investment is paid for with gas taxes, yet increasing this tax is so unpopular that it has not been raised in 22 years. To get the amount of capital that experts say is needed to fix this problem, this political sacrifice will need to be made, yet neither side seems willing to do it, as evident by the major candiates’ infrastructure plans.

All in all, action needs to be taken on infrastructure. Both sides seem to agree on this, given that it is a part of both major candidates’ policy proposals, yet to date very little has been done to fix the problem. Rebuilding the nation is not a painless process– FDR’s public works program cost about $11 billion and building the highway system cost the federal government $119 billion. Though Clinton and Trump agree on almost nothing, both say that infrastructure spending needs to increase. Given the plans–or lack thereof– both candidates have laid out, it seems that Clinton is the choice for making the nation’s infrastructure stronger. To make the country strong and safe, bold action needs to be taken.