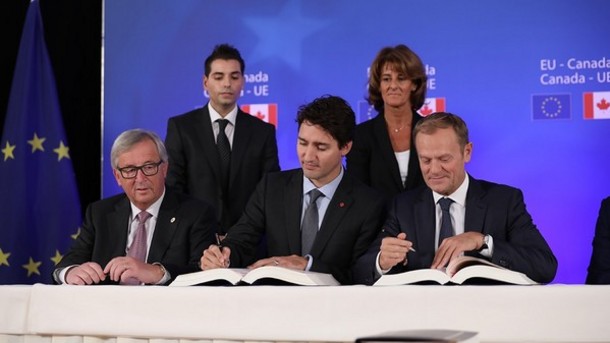 CETA and the fate of free trade: Why the EU and Canada’s new deal changes how trade agreements are negotiated for good

CETA has been negotiated for the past seven years. The most recent obstacle it faced was when Wallonia, one of three regions in Belgium, did not agree to its ratification until additional safeguards were added. Wallonia fought for and won an addendum that provided protections for Walloon farmers and allowed the Belgian government to assess the economic impact of the deal and to have the ability to challenge the validity of the investor court proposed by CETA at the European Court of Justice. Opponents assert that multinational corporations could use the court to weaken regulations by claiming they were adversely impacting business. The next obstacle may be the votes by the 42 governments, as the leftist parties in Germany have said they will vote against the deal in the Berlin regional assembly. Their opposition was not stymied by the addendum, as it was not a change to the actual text of the agreement or a guarantee that there would be modifications to the investor court system.

Proponents of the agreement claim that CETA will increase the EU’s economic output by over $12 billion annually from the over $15 trillion GDP it had in 2014, while reducing tariffs by 98%. They also tout provisions that look to encourage sustainable development and cultural protection, while giving companies access to new government contracts. Opponents argued that CETA would lead to more privatization, increase the price of pharmaceuticals, and decrease environmental, labor, and food standards. The EU has relatively high standards while Canada has not yet passed all of the International Labor Organization’s conventions. Opponents also disliked that CETA was passed without full transparency. While the declaration’s terms were made public, the full agreement was not made public until after the negotiations, and no changes were allowed to be made

Though secrecy in these negotiations is standard now, there is no requirement for secrecy. Instead, experts argue that secrecy can help governments pass the deal since there are no concrete terms to oppose. There have been deals in the past that were more public. For example, the Free Trade Area of the Americas that started being negotiated under George W. Bush, was released to the public with sections that had not yet been finalized. The US Office of the Trade Representative has also created a public interest advisory committee, but opponents state that there still would not be full access or transparency.

The EU is in negotiation to pass other major trade agreements as well, such as a trade deal with the United States, known as Transatlantic Trade and Investment Partnership (TTIP) and a future agreement with the UK post-Brexit. Another reason CETA faced massive protests is because the opposition believes it would lead to these other agreements with even less safeguards being passed. The difference between CETA and any potential deal that is agreed to with the UK is that the UK will be seeking to add limitations to their agreement, such as limiting free movement. There is also now a precedent for how long it can take to pass trade agreements and the amount of bargaining power each party in the agreement has.

This sort of anti-trade sentiment is not new, but this brand is unique and may be due to the political context of the Great Recession and what recovery has looked like. For example, Wallonia is more rural and not as economically well-off as the rest of Belgium. Opposition to free trade has also affected the US presidential campaign, as Donald Trump has railed against “unfair” trade deals on the right, and Bernie Sanders and Hillary Clinton have spoken out against the Trans-Pacific Partnership (TPP), an agreement between the US and 11 other countries, for its lack of worker and environmental protections. In the past, there was a mobilization against the North American Free Trade Agreement (NAFTA) in the 1990s from the Democratic congressional leadership and unions.

This sort of sentiment has become more pronounced since the economic downturn and an increase in automation, which has displaced blue-collar workers in developed countries the most. The European far right and the Donald Trump wing of the Republican Party have grabbed onto this sentiment and tied it to anti-immigrant, xenophobic policies. For example, the National Front (FN) in France is against the free market and favors a bigger welfare state while decreasing the annual number of legal immigrants. Marine Le Pen, the FN’s leader spoke out against CETA as well. The European far right also equates the defeat of trade agreements with the failure of the EU and transnational bodies in general, as Geert Wilders from the Netherlands declared when a trade agreement with Ukraine failed.

Though CETA seems to be on the path to passing now, it seems likely that other free trade agreements will face many obstacles going forward, and that opponents’ concerns now have a precedent for being heard. While progressive leaders, such as President Obama and Prime Minister Justin Trudeau, tout the benefits of these agreements once in office, governments and negotiators may need to be more transparent with the public and reach out to those still feeling the effects of the Great Recession if they want these deals to pass, as there is now opposition on both the right and the left.