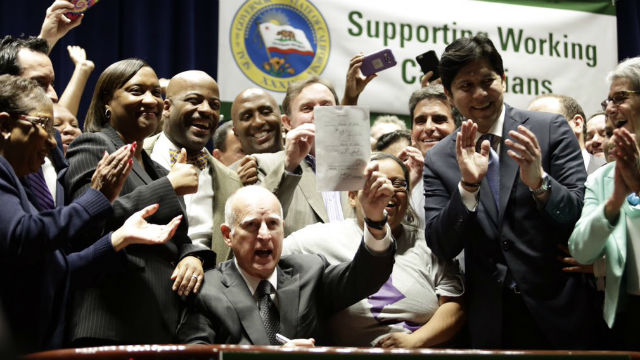 Fight for $15: The Minimum Wage Battle in California

On April 4, 2016, Governor Jerry Brown signed Senate Bill 3, mandating an increase in the minimum wage in California to a maximum of $15.00 per hour by January 1, 2022. By most accounts, the battle for a $15.00 minimum wage should have been over, yet the debate continues across the state.

The minimum wage increase mandated by SB 3 establishes a timeframe by which the statewide minimum wage must be increased, but local municipalities are not forbidden from accelerating this timeline. Major cities such as San Francisco and Los Angeles have already passed legislation bringing their cities to $15.00 per hour well in advance of the 2022 deadline but both of these cities did so before SB 3 was passed. San Francisco is slated to reach the $15 marker in 2018 due to a local ballot measure passed in 2014, while Los Angeles will reach the same milestone in 2020 due to a City Council measure passed in 2015. Around the state, though, some municipalities, such as Berkeley and San Jose, are continuing to push for an early $15 minimum wage. Perhaps the most notable case of this is the city of Berkeley, where not one, but two competing ballot measures are slated to appear on the 2016 ballot. Measure BB proposes to raise the wage to $15.00 by January 2019, while rival Measure CC pushes for the increase by October 2017, with an additional increase to $16.37 per hour by 2019.

The continuation of the minimum wage debate stems from competing liberal factions within Californian municipalities. As the Republican Party loses relevance throughout the state and the Democratic Party consolidates its hold, California Democrats are becoming less and less unified and more prone to infighting between progressive and moderate blocs. This growing division is evident in many facets of state politics, including the neutering of climate change bill SB 350 during the 2014-2015 legislative session, where moderate Democrats from inland California forced the removal of certain provisions from the bill that were favored by progressives from coastal areas. Moderates tended to be more sensitive to the needs of business interests, while progressives were less inclined to listen to these groups. Likewise, this dispute has spilled over into the debate over the minimum wage.

Nowhere is this minimum wage debate between moderates and progressives more fierce than in Berkeley. In late August, the Berkeley City Council approved a new law that will have the minimum wage in Berkeley raise to $15 in 2018, well ahead of the statewide increase in 2022. This law is the result of a compromise between proponents of the two competing ballot measures BB and CC. Measure BB, the more moderate of the wage increase schedules, was previously endorsed both by Berkeley mayoral candidate Laurie Capitelli and by the majority of the Berkeley City Council. Capitelli is endorsed by outgoing mayor Tom Bates, and is representative of moderates both within City Council and the state of California. Capitelli’s main opponent, Jesse Arreguin, is a progressive member of the City Council and was a former proponent of Measure CC. Arreguin is in many ways representative of the insurgent wave of Bernie Sanders-esque progressivism that has swept the nation, and in fact Arreguin is endorsed by Sanders himself for the Berkeley mayoralty. Despite both advocating for an accelerated timetable for the minimum wage increase, both Arreguin and Capitelli have fallen into the bitter infighting that has begun to plague California Democrats. The minimum wage increase passed by the Berkeley City Council in August is a compromise between their two proposals, and as a result, both Arreguin and Capitelli have withdrawn support for their respective initiatives. Nevertheless, their intra-party dispute has led to two competing minimum wage initiatives that will both overrule the City Council law if voters approve either in November.

Despite broad support across the Democratic Party, the $15.00 minimum wage increase is not without its detractors. Governor Jerry Brown, himself generally considered a moderate Democrat, was one such opponent. Governor Brown’s moderate tendencies have put him increasingly out-of-step with the more liberal legislature, and Brown has frequently expressed reluctance to raise the state minimum wage, and stated that the $15.00 wage in California “may not make sense” even as he signed it into law. Nevertheless, Brown was forced to acquiesce to SB 3 when it became likely that a separate labor-backed initiative, known as the Fair Wage Act of 2016, would make its way to the 2016 ballot. The proposition would have increased the minimum wage to $15.00 by 2021, yet Brown’s signature of SB 3 pushed the timetable back to 2022. Following this, the Fair Wage Act was withdrawn from the ballot.

Outside of the Democratic Party, fierce opposition continues to rage over the $15.00 minimum wage. Detractors of SB 3 make the expected claims that it would be detrimental to business and that it could force some minimum-wage workers out of work entirely, but they also cite the lack of a graduated rate throughout the state. In March 2016, Oregon ratified a new minimum wage increase that would bump the rate to $14.75 per hour by 2022 – but only in the city of Portland. In suburbs of Portland and other smaller cities, the rate would increase to $13.50, while in rural areas, the wage would cap out at $12.50. This was done to account for the lower cost of living outside of major urban areas, and the corresponding lower median wages in these areas. Unlike Oregon’s system, the Californian wage increase features no such tiered system. The minimum wage will be the same in Fresno or Humboldt as it will be in San Francisco or Los Angeles, despite astronomical differences in the cost of living in these areas.

While SB 3 was passed to great fanfare, the debate over the minimum wage in California is far from over. In some parts of the state, arguments rage about how quickly to raise the rate, while in other parts, dissent continues about whether the rate should have been raised at all. As modern progressivism continues to grow as a political movement in California, the debate over an even higher minimum wage seems almost inevitable, and the minimum wage is likely to remain a hot-button topic for the foreseeable future.