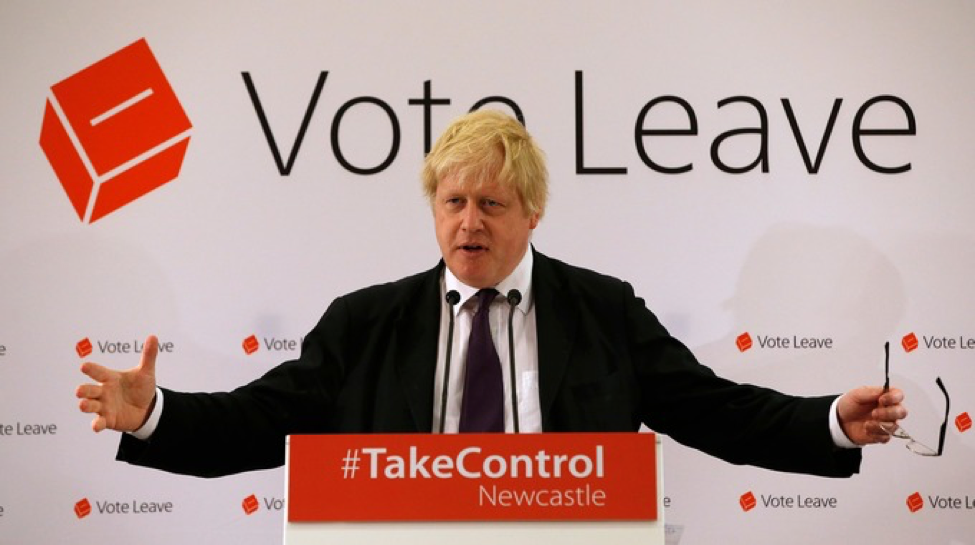 Boris Johnson, the new foreign-secretary of Britain, was the driving leader of the Brexit campaign.

It is yet another night in London, when the usually busy and crabby British gather in local pubs to loosen their ties and sip on bitter beers. The slightest mention of politics or Brexit has people roll their eyes and sigh with disgust, some making finger guns to tiredly shoot themselves in the head.

“I’m personally looking to relocate to Brussels while I can,” says one man with a laugh, before going on a rather serious short rant about the full economic tsunami that has yet to be felt by the British financiers. “But I suppose no one really knows what’s going to happen. We haven’t swum these waters.”

As the United Kingdom hangs on a dangerous political limbo, economic and political uncertainty have become facts of everyday life for the British public. The immediate tank of the pound after the vote has propelled many to forecast an absolute disaster for the British economy after the complete exit; however, despite the severity of the vote’s preliminary impacts, the new prime minister Theresa May and her cabinet do not seem to be on a hurry to chart on remedial efforts, nor the negotiations that will articulate Britain’s exit terms from the European Union.

However, what has been established is that Brexit will be a hard-cut divorce. The perpetually disheveled Boris Johnson—the former leader of the Exit campaign and May’s to-be foreign secretary—drew hard lines for the upcoming negotiations in a letter to the prime minister, which included “controls over immigration from EU countries, an end to budget contributions, a stop to more EU legislation applying to the UK and Britain’s removal from the authority of the European Court of Justice.”

Can Britain retain its caliber as a global economic superpower without an access to the single European market? Can Britain achieve higher security and “purer” cultural identity by restricting immigration? Will Brexit be a holistic net benefit or a net loss? Despite the global incredulousness towards the existence of such questions, these questions have long consumed the British public, spurring hot-headed debates and political divisions.

Economists around the world have long come to a unifying consensus that open economies and free trade are beneficial to a country’s economic growth and prowess, particularly for already developed nations such as England. (Development theory for developing nations requires a much more nuanced understanding, which is out of the scope of this article.) The negative ramifications of free trade—abusive outsourcing, child labor, inequality, and the lack of support programs for those who are left behind—should ideally be the government’s responsibilities to remedy. Keynesians and classical liberalists alike agree that economic isolationism causes extreme inefficiency and general stagnation, due to varying comparative advantages in production of goods and degrees of education.

The European Union’s general prosperity has been a result of the combination of free market economics and strong social welfare policies. Despite its recent structural problems, the EU remains a revolutionary mechanism that created an efficient, integrated market equipped with fluid labor movements. David Cameron, the former Prime Minister, was correct when he asserted that “we can’t just celebrate the benefits of globalization [but] also be honest about its costs”—continuous domestic welfare reforms and innovative free trade are a single package for common well-being.

Much of the reasoning behind the Brexit campaign had lacked this understanding, propelling Britain into an unnecessary black hole. A part of the original blame traces back to the British government’s historical unwillingness to regulate its turbo-capitalism and remedy its inequality, unlike its European counterparts that have pursued more labor-conscious, quasi-socialist approaches. Instead of placing the blame on the lack of such governmental initiatives, the Brexit campaign misled the anger of Britain’s blue-collar workers to retrogressive isolationism.

In its separation from the EU, Britain severed its access to the EU financial passport; and although Johnson has foolishly asserted that Britain’s free trade and finance with the EU will be maintained, the EU’s four freedoms—goods, capital, labor, and services—are inextricably linked together as a single unit. Other European leaders participating in the negotiation will not allow the British to cherry-pick what it wants and omit what it doesn’t want; even Norway and Switzerland, who are not EU members, pay contributions and allow free movement of labor in order to enjoy its trade and financial benefits.

“They’re all underestimating the Brussels bureaucrats,” fires another man, referring to May and Johnson. “And the more they wait to trigger Article 50, the more irritable people are going to become. That can’t be good for the negotiating table.”

Further, the economic pros of a EU membership immensely outweigh the costs. In the global scale, EU remains one of the primary trading blocs along with the United States and China; within the European continent, EU remains Britain’s largest trading partner. Therefore, Britain’s powerful economic identity only exists with its position within the EU. The country’s massive annual fee to the EU and the supposed lack of control over how the fees are spent—which have been one of Johnson’s main platforms—are parts of EU’s structural problems that should have been solved in mutual cooperation. Simply withdrawing from a problem is never a shrewd choice.

An argument against cultural globalization—which served as one of the implicit driving forces of the Brexit campaign—requires a different reasoning to refute. When considering Native American tribes in the United States, the more liberal strands of the mainstream discussion narrates that the tribes’ attempts to maintain their cultural identity should be respected. One may apply the same logic to the cultural reasoning behind Brexit—that the native Brits fear the so-called “dilution” of their heritage, due to the increasing influx of immigrants. However, this logic is flawed because it isn’t circumstantially specific.

The United Kingdom has spent centuries as the dominant powerhouse of the world. It is a leading developed nation with a history of imperial colonization, looting, and slavery, in contrast to entities like the Native American tribes that were historically vulnerable. Therefore, while underdeveloped and historically disadvantaged entities are entitled to a protected heritage free from attempts of appropriation and foreign “intrusions,” Britain’s attempt to maintain cultural homogeneity—which carries religious and ethnic undertones—simply equates to xenophobia.

Similarly, the Brexiteers’ desire for self-reliance and self-sufficiency cannot be equated to that of developing nations. The revisionist movement against unilateral development aids is an attempt to reclaim national identities—both economic and sociopolitical—stolen during the colonial era. However, the Brits’ decision to suddenly claim its need for self-sufficiency is an unfortunate manifestation of blue-collared, underemployed anger, much too similar to that of Trump supporters.

In the twenty-first century, the notion of “national identity” is experiencing radical changes. Ethnically homogenous populations are becoming a thing of the past; the benefits of globalization and technological progress—easier and cheaper transportation, Internet availabilities, and integrated economies among others—are creating rich diversity and heightened global awareness. Recent years of terrorism, severe economic inequality, and the refugee crises have been temporary contingencies indicative of a need for greater cooperation and compassion, not nativist isolationism.

But as we’ve witnessed throughout history, radical nationalism was perhaps an inevitable outcome of a prolonged economic recession, unemployment, inequality, and disillusionment that have plagued the common Brits.

So what does this mean for Britain moving forward? Much of it depends on the future policy direction of May and her cabinet, as well as their drive to heal Britain’s crippling cultural divide and broken confidence. In the upcoming years, their ability to do so will be sorely tested and scrutinized.