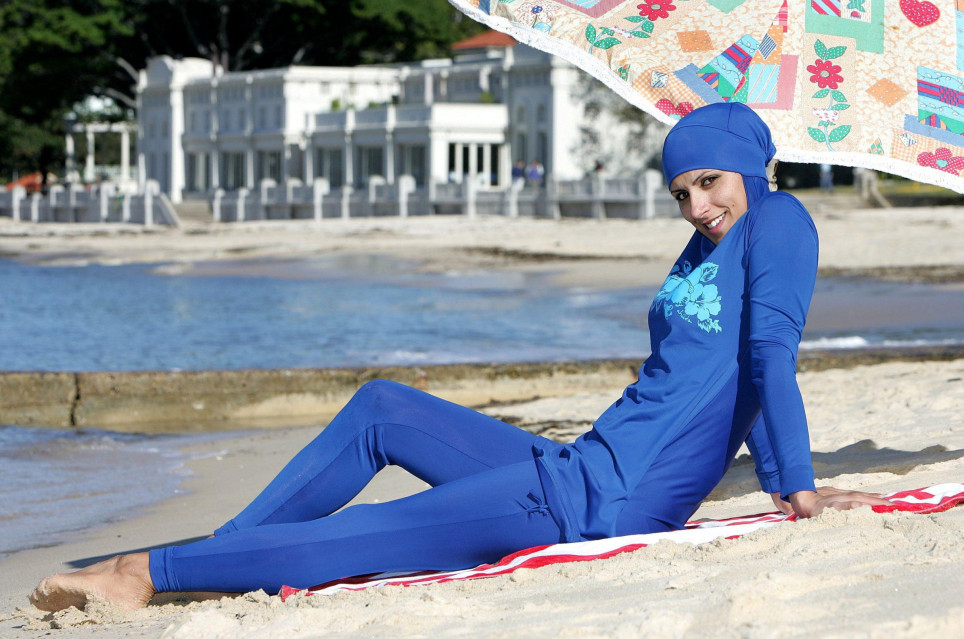 On July 28, the French Riviera town of Cannes implemented a new law that would quickly become a trend: they banned the wearing of the “burkini”, a full-body covering swimsuit that allows conservative Muslim women to cover up while at the beach.  A number of coastal French towns soon followed suit, leading to incidents such as the one photographed and widely reported on in Nice, during which three police officers can be seen standing above a middle-aged woman as she is forced to remove her long-sleeved top.

The original order signed by Cannes mayor David Lisnard stated, “A beach outfit showing in an ostentatious manner a religious affiliation, given that France and religious places are currently the target of terrorist acts, has the nature of creating risks of troubles of public order (mobs, conflicts, etc.) that are necessary to be prevented.”  Mayor Lisnard also called the burkini, “a symbol of Islamic extremism.”

The ban is considered a response to several attacks over the summer in Europe, including several in Germany, connected to the Islamic extremist terror group, the Islamic State(IS).  The July 14th Bastille Day attack in Nice, during which a French-Tunisian man killed 84 people with a truck, marked the latest act of terror. This contributes to a buildup of tension and fear beginning with the Charlie Hebdo attacks in January 2015, in which twelve people were killed in retaliation to cartoons depicting the Prophet Muhammad.

Despite the ban’s reasoning, there don’t appear to be any documented cases of burkinis creating “troubles of public order” on French beaches.  The bans don’t explicitly address burkinis, instead offering opaque instructions such as a requirement for attire “respectful of good morals and of secularism” and even citing “hygiene.”  In practice, police appear to have been exclusively focused on the good morals and hygiene of Muslims.

France’s highest court agreed with human rights groups that the ban was illegal and overturned it on August 26th, although many towns were slow to comply with the ruling.  The divide in France and the world over whether or not the ban was justified continues.  France’s Prime Minister Manuel Valls continued his defense of the ban, writing on Facebook that that burkini is is “the affirmation of political Islam in the public space.”

Comments such as these are indicative of an Islamophobia that increasingly separates moderate Muslims from French society.  To Valls, a symbol of an Islamic lifestyle is necessarily a symbol of political Islam—something he sees as inherently negative and threatening to the nation.  This type of attitude ensures that as France faces increasing security concerns, the portion of its population that should be its greatest allies in fighting terror will be further alienated.  Muslims make up 7.5% of France’s population(the largest percentage in Europe, many immigrating from France’s former colonies) and have long dealt with labor market discrimination and lower average incomes.  The burkini, following its original intentions, actually offers an opportunity for Muslims to increase their integration into French society, particularly in the beach cultures of Southern France where most bans were enacted.  To politicize an outfit that allows conservative women to participate in local recreation that they otherwise would not is to send a clear message that Muslims are not wanted in French society if they bring their identity and tradition with them.

While France’s fierce secularism has been cited as another reason for the ban, religious freedom has been cited in opposition to it, since it is primarily aimed at Muslim women.  It is worth noting that other religious symbols have not been banned (outside of public institutions, where all conspicuous religious symbols are prohibited), making the argument for secularism confusing.  Secularism, in fact, relies on religious freedom for its democratic implementation.  Only when people are free to practice their religion as they see fit, barring harm to others, can a healthy society separate those religions from political processes.  If anything, the burkini ban has brought religious differences right into the heart of politics, by using democratic ideals to disguise fear and intolerance. As a fundamentally secular and ostensibly free society, France has misunderstood its own values by collectively punishing Muslims amid amplifying extremist threats.  France’s banning of face-coverings in 2010, which was aimed at the niqab, a face covering that shows the eyes, and the less common burka, a full body covering which obscures the eyes, have done little to promote public safety.  The burkini ban in particular is less about cited protection of citizens and secularism, and more about the misdirecting of a country’s very real fear to an entire religion and heritage of people.

France should recognize that the compatibility of religious freedom and secularism depends on the equitable treatment of minorities.  Without this, secularism quickly becomes a tool of persecution, rather than a way to allow a pluralistic society with a unified government.  A tipping of the scale away from religious freedom is especially dangerous in a situation where signs of Islam are increasingly(and falsely) seen as necessarily signs of Islamic extremism.   Attacks by IS are designed to create a climate of fear, driving a concomitant wedge between Muslims and the “West.”  Feeding that separatism gives IS its best evidence of a world hostile towards Islam, and compromises both France’s overall security and its Muslim citizens’ rights.