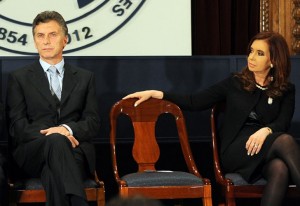 Argentina: The Division of the Kirchneristas Portends the Return of the Right

After twelve long years of left-wing Kirchnerismo, the center-right political alliance Cambiemos (“Let’s Change”) finally took hold of the Casa Rosada, Argentina’s presidential residence. Only two months after losing the presidential elections against the center-right alliance on December 10th, Argentina’s former ruling Frente para la Victoria (“FpV”) bloc has already begun to crumble. With newly elected President Mauricio Macri leading the way, it seems like the right has found the juncture to change Argentina’s political agenda to another direction. However, his predecessor Cristina de Kirchner and her followers—the so-called Kirchneristas—are reluctant to fully hand over the reins of the nation to the opposing party. Although the former president has ceased to hold any formal position in Congress, the political influence that she still bears on many of the deputies continues to be strong. After her husband Néstor Kirchner, who held office between 2003 and 2007 and initiated a political group devoted to his platform, passed away in 2010, his wife Cristina took the movement under her wing and managed to maintain power over the executive branch until the last election in 2015.

Not only did the results from the last presidential election mark the end of the Kirchnerista wave in the executive office for the next 4 years, but they also heralded the defection of 12 legislators who used to form part of the FpV. This group, along with 5 legislators, has now compromised the strength of the Kirchneristas to lead an effective opposition to Macri.

Earlier this month, a bloc of 18 legislators pertaining to various provinces announced their rupture with the FpV, reducing the party’s MPs to 81 members—enough to maintain their majority in Congress, but below the number required to control the legislature when a quorum is reached on legislation. With representative Diego Bossio at the forefront, the new alliance has publicly revealed its purpose of forming an alternative party, one that constitutes a more moderate opposition to Macri’s government. In fact, Bossio declares that he will make “reasonable negotiations” with Macri’s bloc on decisions as they see best for the people. This strategy is publicly defended on the grounds that “Macri has to do well in order for Argentinians to do well,” in Bossio’s words. The logic goes that if the opposition is so tough that the government finds itself against the wall, unable to govern, nobody will benefit.

However, it seems that Bossio is taking more of a pragmatic stance than is apparent. On the one hand his breaking with the FpV can be seen as a product of the internal disputes over the succession of Fernández de Kirchner as the leader of her bloc. Bossio was very close to the former president, even holding important positions during her government, such as executive director of ANSES, which the national social security agency. However, he now forms part of the group of critics who believe that new leadership has to reform the party in order to return it to the presidency, and his departure from the FpV exerts pressure on Kirchner’s retirement. Besides this, almost three months into his administration, the newly-elected president Macri still scores highly in national polls — even higher than during the presidential campaigns, and popular support for him does not seem like it will cease any time soon.

The path towards a transition from Argentina’s long-ruling Left seems much more plausible than ever before. With a high favorability rating and a fractured opposition in Congress, Macri has entered the political scene with a number of channels that allow him to carry out much of his political agenda. For example, Macri recently announced an agreement with the so-called “vulture” funds — hedge funds that had invested in unstable or weak Argentinean debt — in an effort to recover the credit availability that was lost during the default of 2001. Working closely with the IMF, Macri’s plan is to repay the debt that was suspended for almost 15 years in order to regain attractiveness to foreign investment and expand the country’s credit availability. Moreover, the elimination of the ‘cepo’ — a state regulation imposed on the purchase of US dollars— reveals the overlaying purpose of liberalizing markets for the sake of economic growth. Ultimately, the effectiveness Macri’s neoliberal policies is yet to be seen.

The division within the opposition will most likely play in favor of Macri and his right-wing allies. It will further erode the left, not only in Argentina but also across Latin America. In a region previously known for electing populist leftist leaders, the Venezuelan opposition’s victory in last year’s midterm elections and Bolivian President Evo Morales’ recent loss in a constitutional referendum show that Latin Americans are becoming exhausted with the progressive movement, demanding its urgent reconfiguration.