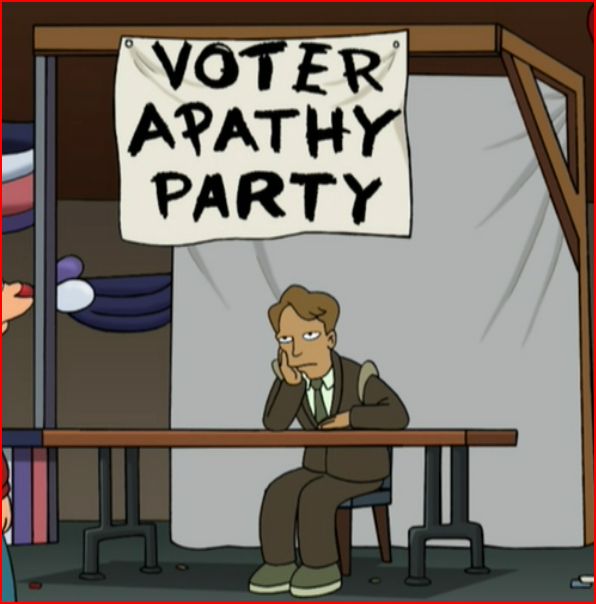 Pete* has been apathetic about politics since the death of Robert Kennedy in 1968. After being an active participant in Bobby’s campaign, he has not been able to muster support for another candidate in forty years. Pete is not the only person who feels this way; voter apathy is a major problem in the United States. Low turnout is largely caused by apathy—people do not think that their vote matters, so they think that voting is pointless. Even in the presidential elections—where people typically care the most about voting—turnout has rarely been over 50 percent since 1960. Yet this year may be different. There are currently two very different candidates in the race, Bernie Sanders and Donald Drumpf, who are starting to make people realize that their vote can make an impact.

Low voter turnout can influence the outcome of elections, as evident in the 2010 midterm elections. The voter turnout rate was an abysmal 37.8 percent—only about a third of eligible voters actually voted—and ushered in a Congress that had an approval rating of 11 percent which was, at the time, the lowest approval rating in Congress’s history. Yet despite this low approval rating, the same phenomena happened in the 2014 midterm election—voter turnout was only 36.3 percent, leading to another Republican controlled congress. Clearly the unpopularity of the previous congress did not mobilize voters at all to change this phenomena. The Congresses elected from these years of low turnout has shut down the government over Obamacare, refused to pass gun control legislation after the Sandy Hook incident, and attempted to defund Planned Parenthood. 8 out of 10 Americans disliked the government shutdown, polls showed that 90 percent of people supported the post-Sandy Hook gun control measures, and 60 percent of people are in favor of funding Planned Parenthood. Even though Congress made these irresponsible decisions, they manage to get re-elected, partially because so few people actually vote.

Voter turnout has not been over 60 percent since 1968, meaning that in the past 50 years only about half of the electorate has been represented. In 2008, which was viewed as a historic presidential election, voter turnout was still only 56.8 percent—just 1.5 percent higher than it had been in 2004. Voter turnout is so low in these elections that even a small increase in participation could potentially have changed the outcome of the election. These low turnouts make one thing very clear—American voters do not care. But Bernie Sanders and Donald Drumpf have been changing this. They have managed to electrify their bases and make traditionally apathetic voters rush to the polls to support them.

Part of Sanders and Drumpf’s appeal is that they are seen as outsiders who have refused to take money from big corporations. Many have come to believe that politicians are necessarily corrupt. Since the Citizens United ruling in 2010, which allowed more money to pour into our political system, many feel that all politicians are owned by big businesses. In comparison, one of Drumpf’s biggest talking points is that he is funding his own campaign, likewise Sanders has turned down donations from corrupt business men like Martin Shkreli whilst funding his campaign with a record breaking number of small donations. The way that these men are running their campaigns makes them appear like a different brand of politicians, causing traditionally apathetic voters to view them as politicians that they can finally trust and believe. This faith that they have in the candidates gets people who usually stay home to swarm to the polls.

Regaining trust in the political system is very important. When people become apathetic about the system because they see it as corrupt, they become less likely to participate in it at all. This negative outlook on the political field makes people less likely to run for office. Some youths who want to make a difference are so discouraged by the political system that they never try to enter it, so they never have an opportunity to fix it. Thus when non-traditional politicians like Bernie and Drumpf get people to vote, they also get the public to take an active interest in the system and feel like they too can make a difference. In the end, this new paradigm could encourage more people who want to change the system to run for office, which could positively impact the political system.

Though Drumpf and Bernie have some basic similarities, many of their methods for attracting voters differ. According to Jamie Chandler, a Political Science Professor at Hunter College, two groups who traditionally have the lowest turnout are young people and the poor.

Bernie has managed to fire up young voters—millennials across the nation have been feeling the Bern; the youth vote has overwhelmingly favored Bernie and helped him to achieve many of victories, including his recent upset in Michigan. Bernie has focused his campaigning on issues that young voters care about, such as tuition free college and the legalization of marijuana. Having the support from this one group may seem unimportant, but it could have a major impact on this election. According to Kei Kawashima-Ginsberg, the director of CIRCLE (the Center for Information and Research on Civic Learning and Engagement) at Tufts University, millennials could change the outcome of the election by changing results in key states like Florida, Ohio, and Pennsylvania. This will be the first election where millennials will make up more of the electorate than baby boomers, making them a force to be reckoned with.

Sanders has not only been dominating the youth vote, winning more than 80 percent of the youth vote in both Iowa and New Hampshire, he has been driving millennials to the polls. In the Nevada caucus, youth turnout was a full 5 percent higher than it had been in 2008, showing the impact that Senator Sanders has had. Rigel Robinson, the founder of UC Berkeley Students for Bernie—the largest college organization supporting Sanders in the country—feels that “Bernie’s appeal to young voters lies primarily in his authenticity and his appeal to change.” He went on to note that “ Bernie’s campaign has awoken a sleeping giant, an immense population of voters that would not otherwise have been involved in the political process. From independents that generally boycott the two-party system to young people about to cast their first votes, Bernie has excited a generation.” This enthusiasm that Bernie has created in young voters has helped to fire up a traditionally apathetic base. That being said, young people are not the only Bernie supporters. Pete* was inspired to care about politics again because of Senator Sanders and has volunteers in Nevada to help get out the vote. His messages of economic inequality and his authenticity have had a large impact on many people.

Donald Drumpf has energized his base in very different ways. He has managed to inspire people to go out and vote for him by stirring up anger in the Republican base over racial issues. On Super Tuesday, every Republican primary (with the exception of Vermont) had record breaking voter turnout. Yet not every Republican is being driven to the polls because they support Donald Drumpf—many Republicans have voted to help defeat Drumpf. With 63.1 percent of people viewing Drumpf unfavorably, he has the highest unlikeability of any candidate, meaning that he has inspired as many of those who hate him to come to the polls as those who love him. His xenophobic statements about Mexican immigrants and Syrian refugees as well as his anti-Muslim rhetoric have caused some to rally behind him and others to rally against him. Fear has driven many Republican to vote for the first time—some people are so scared of Drumpf being the nominee that their desire to vote against him drives them to the polls. In fact, exit polls show that a majority of first time voters did not vote for Drumpf.

While Drumpf’s inflammatory rhetoric has incited hatred amongst some, to his supporters he represents the new Republican Party. One Drumpf supporter, who was dedicated and brave enough to show his support for Drumpf at a Sanders rally, supports Drumpf’s “nationalistic economic policy and non-interventionist foreign policy” and feels that Drumpf has managed to “mobilize independents who are fed up with the establishment of the Republican Party.” Though many picture Drumpf supporters as older, this man could not have been older than twenty (though he chose not to share his name and age). Many people do support Donald Drumpf—as evidenced by his position as a forerunner for the Republican nomination. Countless news and comedy shows have talked to panels of Drumpf supporters to find out why they are voting for him, and all have similar answers—they think that he is an outsider who tells it like it is. His unscripted speeches and frankness have made many voters believe that Donald Drumpf is the right man to be president.

Drumpf and Sanders have both managed to strike a chord with voters who typically stay at home on election day. Even if neither of these candidates win, they have both managed to bring new voters to the polls and inspired people to care about democracy. Both men have shaped the debate within their parties by bringing issues to light that voters cared deeply about which has previously been ignored. By talking about these divisive issues, they have inspired the most apathetic members of our democracy to vote, which may be a victory within itself, but only if it leads to lasting change. To create tangible change in this nation, these candidates need to inspire people to vote in midterm, state, and local elections, not just the presidential one. Any divisiveness that these two men have caused may be worth it if it inspires more people to vote. If they end up being one-election wonders where their influence ends with the termination of their campaigns, they will have failed in creating a true political revolution.

*Pete chose not to disclose his full name for privacy reasons.