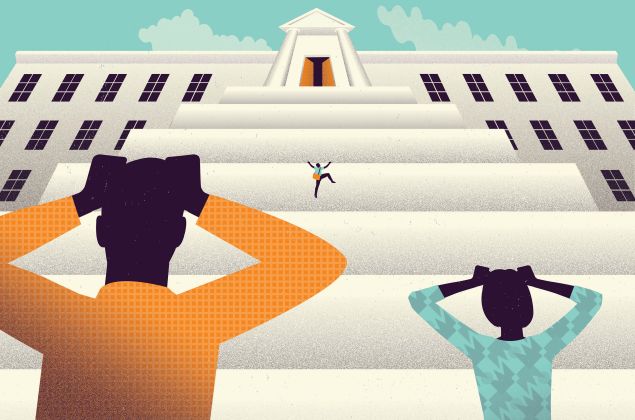 “Life is a race!” cries Boman Irani to a group of college freshmen in the Indian comedy, 3 Idiots. The line, delivered with an iconic lisp by an aging professor, represents an idea that ruins far too many lives. It is unfortunate that in so many stages of life we find the need to focus on competition. We often endure unbelievable amounts of mental and emotional fatigue in order to become more marketable humans than our colleagues, neighbors, or friends. And there is no place where this race presents itself so clearly as in the undergraduate college admission process. All around the world, students find themselves studying for tests, preparing for interviews, and sucking up to anybody with leverage. An article in The Atlantic by Alia Wong denounces the college admissions process in the United States as absurd—she claims that U.S. universities push students to the brink as they battle for acceptance. However, though the article is well-intentioned, it misses a point that requires a bit of perspective to digest: the United States has one of the most humane college admissions processes on Earth.

The argument that institutions in the U.S. have reasonable application processes is bound to upset numerous American teenagers currently stressed out about future opportunities. Let there be no doubt: there is an overwhelming amount of stress involved when you know somebody is evaluating your life based on your extracurriculars, SAT scores, GPA, teacher recommendations, community service, and who knows what else. Alia Wong of the Atlantic claims that it is a “mania,” “pressuring applicants to to pad their resumes and tout superficial experiences and hobbies.” It can’t be denied that the pressure to come across as perfectly well-rounded can be difficult. But this is certainly less stressful than the pressure of being evaluated based on a single test. To countless students across the world, this is a reality: a single number, and its corresponding percentile, is just about all the information required to know if a student is worthy of admission. In markets comparably competitive to the United States, where people need those degrees to achieve what they set out to do and expect of themselves, many would be thankful for some extra lines on an application to breathe a little and express some creativity.

In high schools in the United Kingdom, it is typical for students to take one of two academic programs: the International Baccalaureate or A-Levels. Each of these programs end high school with cumulative exams on a few subjects. UCAS, the United Kingdom’s equivalent of the “Common App,” is quite simple: it requires a teacher recommendation, exam scores, and a 4000-character (approximately two page) “personal statement,” in which a student is expected to describe every aspect of his or her personality beyond exam scores that universities may find appealing. The UCAS website’s piece of advice about the personal statement says a lot about it:

“You can write up to 4,000 characters of text that show you’d make a great student—so it might take a few redrafts until you’re happy with it.”

Even beyond its short length, the UK’s application system makes it quite clear how small a role this piece of text really plays. Applications to universities are dependent on strict, transparent cutoff scores to exams that students take in May of their senior years. Students don’t know their results, and hence are in the dark about whether they have made the cut, until the July before the college begins. That is stress and confusion on a completely different level.

And, compared to India, the UK looks like heaven. The Indian Institute of Technology (IIT), India’s premier technical institution, is known to embody the spirit of Boman Irani’s remarks in 3 Idiots (the movie’s setting was actually based on IIT). A growing trend among Indian students is to drop out of school (and life in general) in order to study for an admissions test, which once again comes with a specific cutoff. Some say that a year of “undivided attention” to this test is necessary to progress. IIT is the extreme case, it’s true, but just about every prestigious institution observes similarly strict practices with required scores.

The Atlantic article about the American system makes a compelling argument on a few fronts—namely, how backwards the United States’ focus on legacy admission is. However, beyond this, the article is criticizing a system that is doing the best it can to give students multiple opportunities to prove themselves. A low SAT score is a hindrance, but it isn’t a hard cutoff. In a quote about American universities by the New York Times’ Frank Bruni, he states that “many kids admitted into top schools are emotional wrecks or slavish adherents to soulless scripts that forbid the exploration of genuine passions.” Such statements apply more snugly to students who take a year off to study for one test for one particular university than to those who join a few community service clubs that they don’t really care about. This in no way downplays the serious emotional trauma that too many American students go through, which at times has (as the Atlantic points out) tragically led to suicide. But the point here is that, in order to prevent such trauma, something must be done to downplay the insane value that society places on being in a highly ranked university. The admissions process itself is, at its core, an attempt at holistic judgment. There is room for improvement, particularly in terms of inciting authentic rather than artificial student passion. Despite this, the United States’ college admission system is founded on principles far more valuable than processes which rely on single tests.