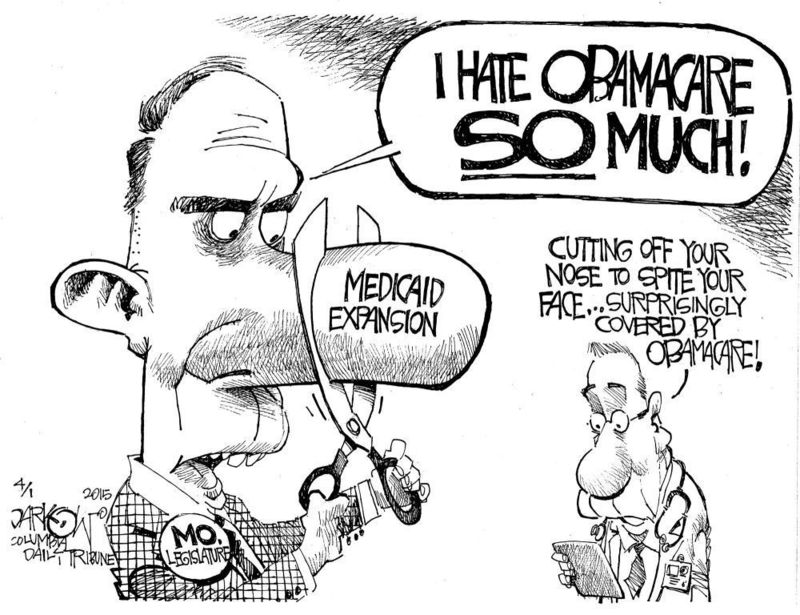 Medicaid: It Hurts. How Healthcare Is Wounding the Republican Party

Republican presidential candidate and Ohio governor John Kasich has become famous for repeatedly providing this same response almost every time he’s been questioned about why he accepted federal dollars to expand his state’s Medicaid program. In 2012, the Supreme Court ruled that while the individual mandate in the Affordable Care Act was constitutional, the provision requiring states to expand their Medicaid programs was not. States could not be coerced into accepting this program, and many Republican governors seized the opportunity to weaken the Affordable Care Act by refusing to accept federal funding to expand state Medicaid programs. The Kaiser Family Foundation estimates that as of January 2016, as many as 3 million people have been left uninsured due to the states that refuse to expand their Medicaid programs. However, John Kasich’s decision to expand Medicaid marked only the beginning of the slow crumbling of heavy opposition to the Medicaid expansion provision. As some Republican governors have started to expand state Medicaid programs, the Republican Party is beginning to face a new partisan divide among its own governors, US Senators, and state legislators.

Since the advent of the Affordable Care Act, which was infamously rammed through Congress by a Democratic majority in both houses, Republicans have staunchly opposed the law, even though the policy itself is deeply rooted in conservative ideology. The main reason for the inclusion of the individual mandate is to prevent the high, and often unpaid costs of emergency room care given to uninsured patients from being shifted onto hospitals and taxpayers when medical care is not paid for. Mitt Romney’s signature Massachusetts healthcare law signifies how an individual mandate was once a Republican idea.

The continuous opposition to the law has much to do with appealing to Republican voters. The healthcare law is still deeply unpopular among registered Republicans. A New York Times survey from January 2016 found that only 10% of Republican primary voters approve of the Affordable Care Act. With the rise of the Tea Party and ultra-conservative factions, policy views have followed the shift in the Republican base and skewed sharply right over the past decade as these smaller political groups have managed to gain vast electoral influence. Many Republican voters have simply followed the party’s rightward shift on this issue as Republican politicians have sharpened their rhetoric regarding the Affordable Care Act and the individual mandate. This offers a viable explanation as to why Republicans have abandoned an idea they once widely supported; Republican governors at first realized that by refusing to expand Medicaid, they could please their fiscally conservative voting base and simultaneously weaken the implementation of the Affordable Care Act, killing two birds with one stone.

Much of the current political clash on the issue is whether or not expanding Medicaid programs would signal approval of the Affordable Care Act. Governor Sam Brownback of Kansas demonstrated how Republicans are bundling every provision in the ACA together and indiscriminately rejecting all of it. In his most recent State of the State speech, he reiterated his view that the ACA was the biggest contributor to Kansas’ healthcare woes and that “We should not expand Obamacare to solve the problem,” a clear dig at critics calling on him to expand Medicaid coverage in Kansas.The rhetoric about Medicaid expansion has largely been used to convince voters that expanding Medicaid is the same as expanding the entire Affordable Care Act so that governors don’t have to worry about the consequences of denying state residents federally funded healthcare.

At the very least, Medicaid expansion offers “a huge benefit to the states, since more health coverage means a healthier population, fewer people losing jobs because of health crises, greater productivity at work, fewer people getting charity care at costly hospital emergency rooms, and less strain on hospital and clinic budgets.” To many of these governors’ credit, waiting to expand Medicaid serves as a politically effective position. It allows them to show their voters that the eventual move to expand Medicaid was made in good conscience and using sound judgment after carefully considering of all the available options, and not as a way to appease the President.

If Republican governors can figure out a way to sidestep conflict with their state legislatures either through the use of executive actions or through compromise, it will bring about health insurance coverage for millions of Americans. As for governors who have yet to consider expanding their Medicaid programs, they should think about the benefits their states would face from insuring residents. Reducing emergency room usage, one of the main contributors to the degradation of the healthcare system’s well-being would protect taxpayers and hospitals from being compelled to unfairly pick up the tab for uninsured patients. Expanding Medicaid would be a sign that the Republican Party still remembers how to follow through on conservative causes.

Manas is a writer for the US Section of the BPR, studying Computer Science and Economics. He is from Charlotte, NC and enjoys hiking and exploring with friends.