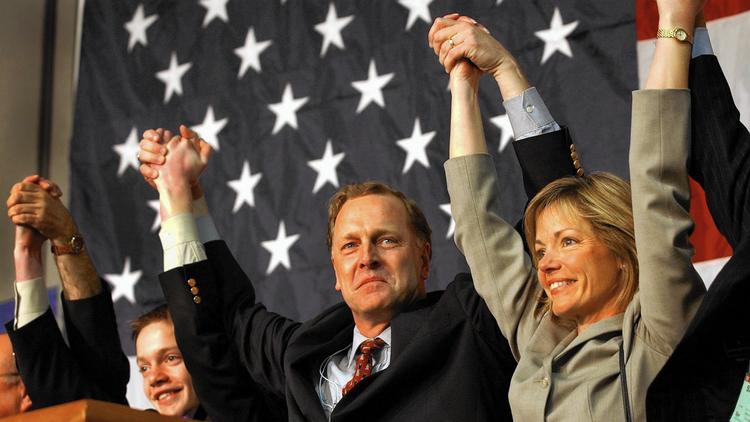 (R-CA): Is It Possible? A Republican’s Quest To Reclaim California’s Senate Seat

What is the cost of being a Republican – much less a conservative – in the state of California?

Contrary to popular belief, it is not completely condemning. After all, this is the state that produced Presidents Richard Nixon and Ronald Reagan, the latter whom is arguably the father of modern American conservatism. But in the 21st century, when states with long-standing political identities are entrenching themselves further into their labels, some politicians are finding it difficult to reach across the aisle without alienating the very demographics that could elect them.

George ‘Duf’ Sundheim is one of them.

As a registered Republican, an attorney, and a former chairman of the California Republican Party leader, Duf Sundheim is a model candidate for the Senate position soon to be vacated by Sen. Barbara Boxer (D-CA). But Mr. Sundheim is also a moderate on many contentious issues––and that is where the conservative electorate rejects him.

In what is a highly divisive election year, both the Democratic and Republican parties are splintered along the narrative of popular grassroots against party establishment figures and institutions. Far from the media blitz bombarding the presidential election, Mr. Sundheim is hoping to be the banner carrier of a California Republican Party that is struggling to reconcile  largely moderate leadership with a vocal conservative member base with increasingly more Tea Party advocates.

Mr. Sundheim’s opponents for the nomination echo similar worries about the race. Al Ramirez, a fellow Republican and a far more conservative candidate is actively courting the Tea Party, and by doing so aims to bring organization and recognition to the grassroots movement. While California Republicans are known to be relatively reserved due to serving in a state dominated by Democrats and reigned by liberal values, they are now embracing their conservatism.

Tea Party advocates are feeling more represented by fellow angered conservatives across the country, and they are beginning to voice their frustration to the moderates who continually control the direction of the state’s Republican Party. When political outsiders can ride upon the public mood to their advantage, and use it to chip away at establishment institutions, the rift in the party will only grow. It is up for argument whether candidates like Al Ramirez can afford to further divide an already struggling California Republican Party against their better-funded, and all-but-anointed Democratic opponents.

As it stands, the two Democratic candidates, Kamala Harris and Loretta Sanchez, have raised a combined total of nearly $9 million. Duf Sundheim stands—barely—at $200,000. But there is a silver lining for the Republicans. The LA Times reported in December 2015 of Atty. General Harris’ risky spending of campaign finances-––$1.4 million spent out of $1.7 million raised from July to September of the past year.

Though some political analysts have considered Harris’ spending habits as indicative of bigger flaws in her campaign apparatus, ultimately, this finding is unlikely to be entirely damaging to the Democrats unless the Republicans can use this to their advantage, i.e. can the Republicans present themselves as literal conservatives compared to their liberally-spending Democratic rivals? At the end of the day, the Democratic war chest—both Harris’ and Loretta Sanchez’s—far outnumbers what Sundheim and his Republicans fellows have.

In the face of enormous challenges from within and without, the California Republican Party’s hopes at securing the soon-to-be-vacant Senate seat hinges on the party’s ability to mobilize supporters, secure funding, and outsmart better equipped—and funded— opponents.

Part of the difficulty of running as a Republican candidate from California for a national office as significant as a senator is mobilizing hope for a Republican victory. For the past two and a half decades, Democrats—more precisely two—have held both of California’s seats in the Senate, and with steady approval ratings. Installing a fiscal conservative like Duf Sundheim or a social one like Al Ramirez in place of Democratic icon Barbara Boxer will surely not resonate well with California’s Democratic establishment, nor will it resonate with a large plurality of faithful Democratic voters.

Some of California’s youngest voters cannot recall the last time a Republican was senator. Dianne Feinstein succeeded Republican John Francis Seymour in 1992, and Barbara Boxer joined her the following year as the junior senator. Though California’s liberal consensus is unlikely to flame out anytime soon, a mobilized conservative activist base hints that a Republican resurgence is possible, though difficult to accomplish, to say the least.

A GOP victory in a predominantly Democratic state for a position as significant as one of that state’s senator is contingent upon widespread unrest. Untimely for the Republicans, however, California under Jerry Brown’s leadership has achieved a fiscal stability many states in have yet to secure. Confidence in Democratic leadership has little positive value for a Republican establishment yearning to dethrone California’s long-standing Democrat monopoly. However, reports are perennially misleading, and Californians’ lowered approval of Jerry Brown—currently at 53%, down from 64% in February—could be channeled into the Senate election in November.

To elect a Republican to the Senate nearly a quarter of a century after the last one would undoubtedly be a major boost of confidence for millions of California conservatives, most of whom have had to adjust their views to the center in order to assimilate to the state’s overwhelming liberal majority.

With less than 10 months until the election, Mr. Sundheim and his fellow Republican candidates must close the divide in their loyalties–to defend conservative values without isolating the many moderates within the party. If disgruntled Tea Party voters in the state’s Republican electorate do not turn out come Election Day, victory will prove to be difficult once more for the Republican Party.

The upcoming election is especially significant. As the largest state in the union, California faces issues even most modern sovereign nations would have difficulty tackling. However, in the wake of the San Bernardino massacre and as the drought continues to ravage, new solutions regarding security must come forth through new leadership. Now it is just a matter of whether the Republican candidate for the Senate will be the one to deliver those.