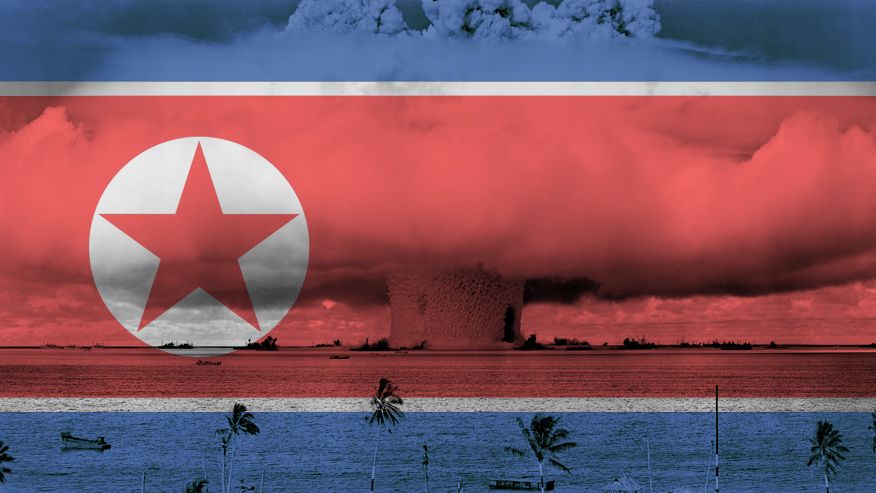 January 7th, 2016: North Korea announced that it had just conducted its first successful test of the hydrogen bomb, a weapon estimated to have the destructive power of 9 kilotons of TNT. World leaders protested the tests in unison. Brazil said that the situation was cause for “great concern,” Russia condemned the nuclear tests as “a threat to national security,” and the U.S. promised to “respond to provocations”.

Yet what should the U.S. response be? Since North Korea left the Treaty on the Nonproliferation of Nuclear Weapons in 2003, the countries of the international community have condemned the nation hundreds of times. Yet every time, it seems like nothing is done until North Korea tests more advanced weapons, which causes a new cycle of condemnations to ensue. Sanctions and military bases can only do so much. As technology progresses, it will only become easier for North Korea to build a nuclear weapon capable of striking the U.S. Permanent solutions, not delay tactics, are needed in North Korea.

The best solution is overthrowing the Kim regime of North Korea through mutual compromise with China. In this scenario, the US withdraws its military presence from the South, China stops supporting the North, and South Korea unifies the peninsula as a neutral state. This solution will end the region’s nuclear fears and may bring democracy and prosperity to North Korea.

Of course, this kind of joint effort will be difficult for the U.S. First, it requires a great deal of trust and cooperation with China. The U.S. has no guarantee that China won’t take advantage of troop withdrawals from the South and swallow Korea whole. At the same time, recent events of the U.S. acting as the “policeman of the world” have yielded poor results; past failures in the Middle East seem to warn against this approach. For these reasons, the US continues to spend about $800 million annually maintaining around 26,000 troops in the South.

However, North Korea’s nuclear program has made the status quo increasingly unbearable for China, and Beijing has made it clear that they are open to negotiations. Kim Jong Un, North Korea’s still-young leader has repeatedly disobeyed China’s orders to cease his nuclear program, and has (understandably) yet to visit Beijing. As North Korea poses a larger and larger threat to the region, the benefits of allowing the Kim regime to collapse are beginning to outweigh the risks. Xi Jinping, China’s president, has begun to openly side with South Korea. He visited South Korea before he visited the north: a move unprecedented in history. At the China-South Korea summit, Xi affirmed his “support for a nuclear-free Korean peninsula and the ongoing free trade agreement negotiations” with South Korea. With China pursuing closer relations with the South, unification (provided that the US demilitarize South Korea) seems increasingly likely.

Thus, 2016 presents a unique opportunity that cannot be ignored. China has turned against the Kim regime at the moment, but the future is uncertain. Maybe Kim, the prodigal son, will realize how undesirable his current situation is and make peace with Beijing. Perhaps China, threatened by Kim, will attempt a solo mission to take out the young dictator and put a new family in power; an action that at best will create a new Chinese puppet state, and at worst, plunge the country into chaos and leave North Korea’s nuclear weapons vulnerable to the wrong hands. Finally, and most likely, the status quo will remain and North Korea will develop yet more powerful weapons. Once Kim has bombs hidden in dozens of locations throughout the country’s mountains, it will be too late to topple him by force.

But should the U.S. compromise? China is negotiating from a position of weakness. Every year that North Korea’s nuclear program expands, China finds a bigger need to switch sides. At the same time, with China expanding its military might, should the U.S. really abandon their South Korean bases?

At the moment, U.S. bases in South Korea, (mere minutes of missile flight time away from Beijing) represent a dagger pressed against the throat of China. This is not the context that 21st century U.S.-China relations should develop in. With bases in Japan only 130 miles off the coast of Korea, withdrawing from South Korea will not cripple the US’s strategic position in East Asia, but will give China the breathing room with which peaceful negotiation can thrive.

Of course, a joint China, South Korea, and U.S. effort to topple Kim Jong Un and unify Korea will not be easy. However, the world will be much better off if U.S.-China relations develop under a tone of trust and cooperation.