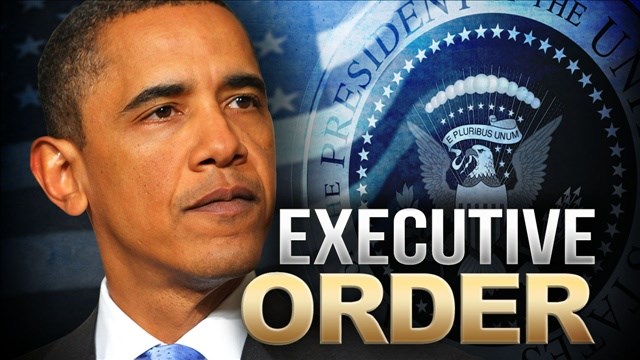 During the recent in-the-gutter name calling of the Presidential campaign, the Republican presidential candidates repeatedly and loudly have proclaimed that the moment they step into the Oval office, they will immediately undue the flagrantly illegal Executive Orders that President Obama has issued.  They assert that the Executive Orders are illegal because Obama is using them to make new

Rather than the duly elected members of Congress solely making laws, we would now have two branches of the government making laws, the legislative branch and the executive branch.  Not only is this contrary to what our founding fathers intended as bounding the scope and powers of each branch, it also starts us down a very slippery and ugly slope.

Let’s take a look at where this might lead.

As French political philosopher Montesquieu famously stated: “There can be no liberty where the legislative and executive powers are united in the same person, or body of magistrates.”

Therefore, are Republicans (and other critics of Obama) correct that these Executive Orders are illegal?

Additionally, is this the first time ever that a President has tried to overstep his reach and issued such Executive Orders?

Executive Orders and Their Bounds

Executive Orders began with George Washington, and have been used by all U.S. presidents since then.

Today, there are well over 13,000 and counting Executive Orders and are considered “presidential directives” along with other presidential proclamations.  Obama has issued about 226 Executive Orders, while recent preceding president’s counts have been that George W. Bush issued 291, Clinton issued 364, George H.W. Bush issued 166, and Ronald Reagan issued 381. Each of these presidents has had critics claiming that some of their Executive Orders were illegal.  For example, George W. Bush issued Executive Orders allowing for expanded warrantless search by the National Security Agency (NSA), leading to this criticism in 2006 by Harry Reid, D-NV and Senate Majority Leader at the time: “In matters ranging from domestic spying to the use of torture, the current president has effectively declared himself above the law.”

Clearly, the use of Executive Orders is well established as a presidential prerogative and has been used by both Democrat and Republican presidents, by liberals and conservatives, ranging from somewhat trivial matters to matters of the utmost importance. The question arises as to whether any specific Executive Order is potentially legal in its reach or illegal in its reach.  To ascertain legality, we need to turn to the third branch of government, the judicial branch.  Ultimately, it is the U.S. Supreme Court that ascertains whether or not an Executive Order is consider illegal or legal.

One of the first such cases involved President Andrew Johnson.  He issued a presidential directive on Christmas day in 1868 that granted a pardon to those that had participated in the civil war. Hotly contested at the time, opponents that thought the order to be illegal took the case all the way to the U.S. Supreme Court.  The Supreme Court ruled that via Article II, section 2, clause 1 of the U.S. Constitution that the order was legal since it was based upon constitutional authority.

However, a Supreme Court ruling will not always go the way of the presidential Executive Order.

In 1952, President Truman issued an Executive Order that instructed the executive branch to seize steel mills, which became a hotly contested presidential directive at the time.  After winding its way through the courts, the case reached the U.S. Supreme Court and the justices ruled that the Executive Order was illegal because it was not based on the Constitution nor by any Act of Congress.

Generally, the U.S. Supreme Court has established that an Executive Order must arise from one of three sources to be consider legal:

Thus, any Executive Order that is issued should be carefully reviewed with respect to those three sources of validation. Per the Truman case and the overreaching Executive Order to grab private steel mills, the U.S. Supreme Court indicated and reaffirmed that the president cannot be a lawmaker and must only be a faithful executor of the law.  This would seem to make it easy to figure out whether an Executive Order is considered legal or illegal. Unfortunately, similar to just about anything else involving the law, it is in reality much murkier than it is clear cut.

U.S. Supreme Court as Decider of Legality of Executive Orders

Now that the Court is at a count of 8 justices, it is likely that any case involving a disputed Executive Order will go to a 4-4 tie, which then allows the last appellate court ruling on the case to generally prevail.  Obama would need to add a justice with a liberal bent to the Supreme Court in order to help ensure that his challenged Executive Orders are considered legal.  This desire to add such a justice is perhaps an insurmountable challenge since the Republican controlled Senate determines whether a justice candidate provided by the president will actually be able to take a Supreme Court seat.

At this time, most of Obama’s controversial Executive Orders will be stuck in limbo until they reach the Supreme Court, and the make-up of the Supreme Court is probably unlikely to be resolved during his remaining tenure in office.

Let’s take a specific example to illustrate this.

Obama had issued a controversial Executive Order on immigration (attempting to protect 4 million or more undocumented immigrants from deportation).

Now, the case is appealed to the U.S. Supreme Court, but assuming the vote goes 4-4 then the appeals court decision will stand and the Executive Order would be considered illegal and not enforceable.

You might wonder why a president would opt to issue a controversial Executive Order and instead of issuing ones that are clearly legal and not contested. Obama expressed it aptly when he said: “America does not stand still, and neither will I,” when asked why he continues to issue Executive Orders that out-the-gate are instantly attacked by his critics as blatantly illegal.  When a president believes that they are faced with a so-called “do-nothing Congress” then the president is tempted to make action occur by producing Executive Orders that presumably are intended to overcome Congressional inaction.

Depending upon whether you are supportive of the particular president at the time, you might think the president is a hero for doing the job that Congress was supposed to be doing, or you might instead be opposed to that president and therefore riled that the president dared to try and overstep Congress.

Obama has said that he has a pen and a phone, and he will use them to create as many Executive Orders as he thinks necessary.  Ted Cruz sees this differently:  “President Obama is fond of saying he has a pen and he has a phone,” Well, live by the pen and die by the pen. Every illegal executive action that he puts in place can be undone in an instant by the next president through the same mechanism. The proper avenue for creating law in this country is not unilateral decree. It is rather passing legislation through Congress that is signed into law by president pursuant to the dictates of the Constitution.”

Only time will tell whether Obama’s Executive Orders are legal or not, and whether the next president opts to undo them or not.  Illegal or legal, lasting or soon to be outcast, you’ll have to watch the news to know which Executive Orders withstand the political gauntlet and which don’t.