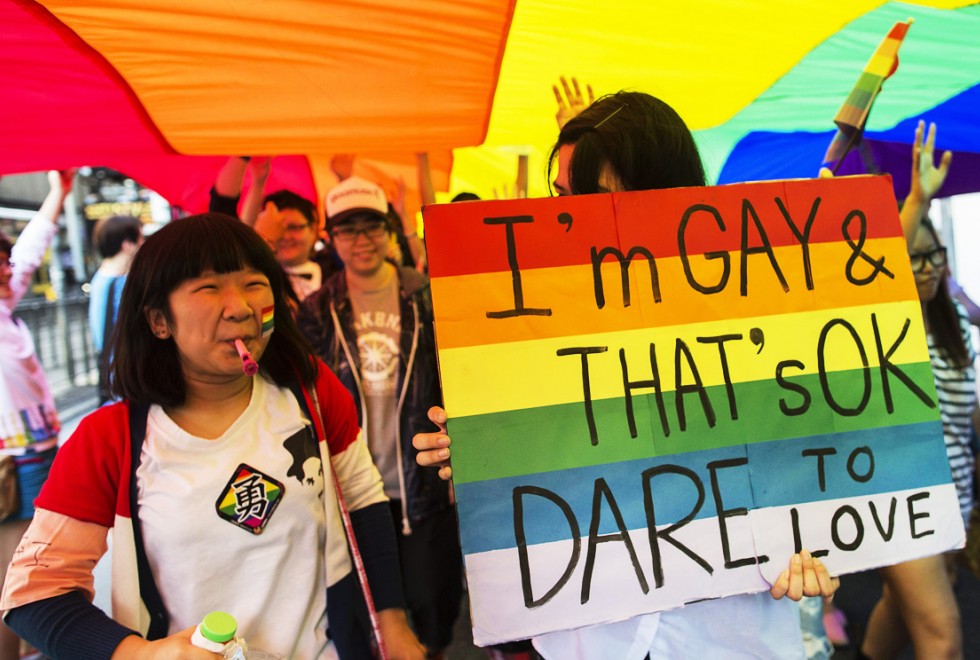 Will the Rainbow Flag Fly Over China?

Following last summer’s landmark Supreme Court decision to legalize gay marriage in the U.S., and the world’s first-ever legalization through the popular vote in Ireland, legions of rainbow flags were hoisted up from Australia to Colombia. However, in South Korea, conservative evangelicals and other anti-marriage equality protesters outnumbered proponents 25,000 to 20,000. A parallel narrative may exist in China, where legalization of gay marriage is still a large hurdle to clear. Although homosexuality in China has been legal since 1997 and no longer considered a mental illnesses since 2001, pro-marriage equality protests are still labeled as either illegal or as potential subversions of state power, and social stigma remains high, especially among older generations and in rural areas.

Interestingly enough, gay rights activists may make significant headway through the courts. China’s court system was previously well known for its refusal to accept cases, even those built on solid evidence, on the grounds of “sensitive court filing policies.” However, as of May last year, courts are now switching to automatic registration for all cases that meet evidence requirements. As a result, two cases were accepted. Late last year, after months of protest in south China, lesbian activist Chen Qiuyan successfully held a judge-brokered meeting to retract the Ministry of Education’s continued use of books or course materials that make the outdated, incorrect claim that homosexuality is a mental illness. This appeared to be a major capstone to the “Reveal the Homophobic Textbook Around You” campaign of 2012, in which 13 homophobic texts were found. However, the meeting reached a stalemate; she was told that the Ministry itself had no say over what universities chose to teach, even though top-down censorship and standardization commands remain ubiquitous throughout China. Even so, Chen’s lawyer is pleased that the court has put such an issue on their priority list, however low. If more activists like Chen step forward, it is almost inevitable that the government will eventually shift it to a higher priority tier.

The second case is a direct challenge to laws preventing marriage equality. Sun Wenlin and Hu Mingliang, a young gay couple, sued after they were denied the right to marry at a local civil affairs bureau. In his complaint, Sun argued that Chinese marriage law refers to marriage between “husband and wife”, but lacks the key distinction as to whether two gay individuals can also be looked upon as such. As a result, in a surprise first-ever acceptance, the Changsha district court took on the case and will have a decision within six months.

While these educational and legal fronts are solid starting points for further steps towards marriage equality, they may stand as isolated cases if one does not look beyond the legal side to the cultural side. Here, ingrained cultural perceptions of homophobia and rejection of one’s sexual orientation may force gay individuals into gay-straight marriages.

From a cultural point of view, traditionally minded parents continue to place a high, Confucian emphasis on childbearing and still consider homosexuality to be an illness. Violence and abuse against LGBT individuals is commonplace within families, who may commit children to psychiatric wards against their will. Violence and misunderstanding is especially high towards transsexuals; officially, it is still considered a mental illness. Support for homosexuality continued to hover around 21% of the Chinese population in 2013. However, of the roughly 80% of Chinese citizens surveyed who claim to be homophobic, according to Parents, Families, Friends of Lesbians and Gays – China founder Ah Qiang, another 80% of parents interviewed find homosexuality to be acceptable but are not comfortable with outsiders knowing their child’s sexuality.

If children are met with either halfway acceptance or complete denial by their parents, it may create even larger social repercussions, as familial pressure may leave them no option but to enter gay-straight marriages. Such are called tongqi—straight women married to gay men—or tongfu, straight men with lesbian women. In many such cases, there are instances of deception, where partners are unaware of each other’s sexual orientations, issues of consent, and transmission of sexually transmitted diseases (STDs).

Likewise, the need to appease unforgiving families has created a rise in gay-lesbian marriages, which are seen as less emotionally volatile. With the creation of the website ChinaGayLes.com and the mobile app Queers, which each have over 400,000 users, “sham marriages” have allowed both parties to “cheat” their parents and help save face for their families, a key cultural concept in China.

As such, parents of gay individuals are ultimately the most instrumental in paving the way to nationwide acceptance. As a long-term solution, better communication and understanding between children and their parents may help diffuse these misconceptions. For instance, father Lin Xianzhi ultimately overcame a rather severe wariness of his son’s “condition” when his son began openly sharing contributions that gays were making to the Chinese community. Today, he has become a prominent rights activist and has sent letters to over 1000 legislators arguing for access to equal property rights and medical care. On a larger scale, Qinyou Hui, a parent-led organization modeled after Parents and Friends of Lesbians and Gays in the U.S., seeks to increase family support for LGBT individuals through promotion of open discussion and support for parents with gay children. The China National LGBT Community Dialogue hosted by the United Nations Development Program (UNDP) in August 2013 united legal experts, NGOs, community-based organizations (CBOs), and government representatives to comprehensively discuss LGBT rights in media, health, and grassroots community development.

In a country where police raids have shut down celebrations of one’s identity, education and awareness promotion may thrive more in the online sphere. However, opportunities to de-stigmatize homosexuality have still been met with frustration. For instance, in accordance with censorship standards, Chinese gay activist and filmmaker Fan Popo’s film Mama Rainbow, on six mothers learning to accept their LGBT children, could have been particularly influential in building widespread parental acceptance of LGBT children, but was taken down from Chinese websites. As an alternative, and to ensure that LGBT individuals can create communities of acceptance, online communities should take a page from Lala, an organization for lesbian and bisexual women. While many LGBT organizations do not actively work with civil society organizations (CSOs), Lala used the combination to span China, Hong Kong, Macau, and beyond.

While denial and stigmatization of homosexuality remains high, it is promising that courts are beginning to take a more active role in heeding gay activists’ pleas for removal of inaccurate texts on homosexuality and ultimately, for marriage equality. With greater cultural acceptance through stronger ties between the LGBT community and CSOs, the next necessary step may be to create an anti-discrimination law that extends from the family to the workplace, rather than a direct jump to legalization of gay marriage. Creating a law-mandated culture will spread acceptance from families on outwards, and lessen the risk for backlash from older generations who still place a high emphasis on childbearing. The first steps to an anti-discrimination law will have to come from the National People’s Congress itself, China’s legislative body. 30 out of 3000 members are needed to put forward a proposal that will be considered by the entire NPC. With greater acceptance from within families, there is a higher likelihood that legislative body members will personally know a gay individual and will be more willing to move legislation forward. Ultimately, this legislation may extend to universal legalization.