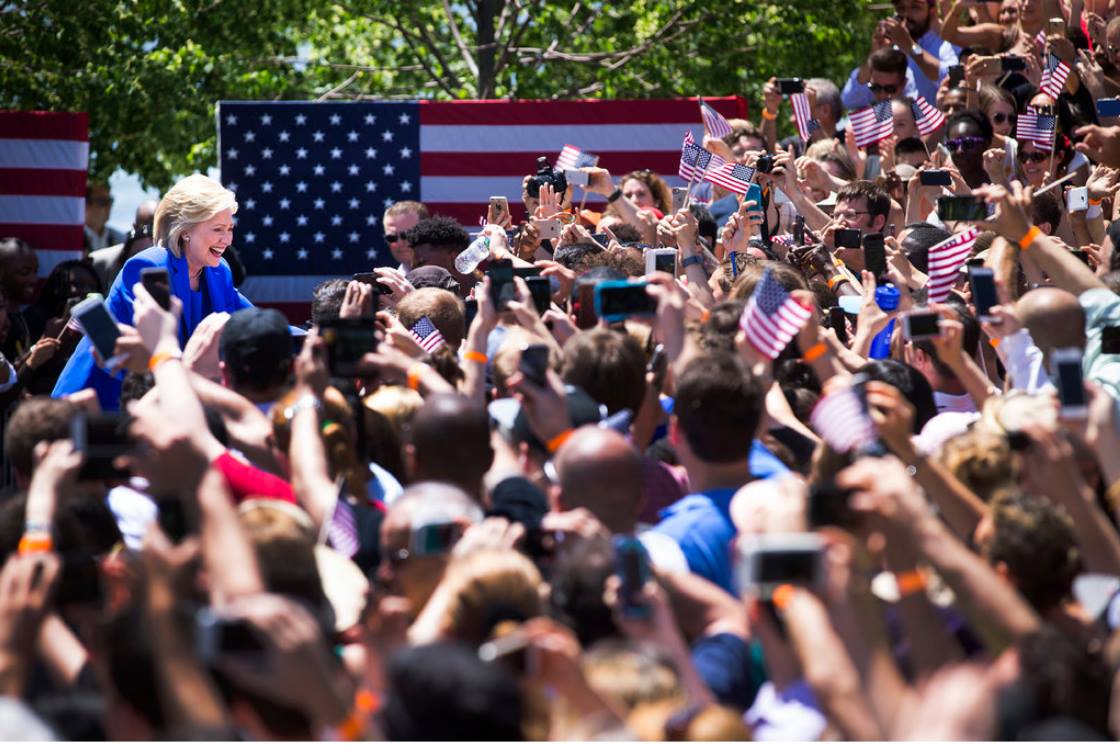 Such Great Heights: The Ascent of Hillary Clinton

Can you hear it—the shattering of the glass ceiling? The 2016 presidential race has been a cacophony of political noise, but not much noise can muffle the fact that, come November 2016, the United States may have its first female president. Hillary Clinton is not only making history and breaking convention by being the first woman to truly contend for the most powerful public office in the United States, but also by breaking a lesser known mold—the role of the former first lady.

Political spouses have played a role in American politics since the very beginning, with first ladies like Abigail Adams and Dolley Madison aiding their husbands in wooing political opponents. With the advent of television, the role of the modern political spouse was augmented. As the American electorate found its presidential candidates reaching into its living rooms, it found itself more invested in the lives of the people vying for their votes. Jackie Kennedy, pushed for more Americans to vote whilst her husband was up for election, participating in Spanish-speaking television ads attempting to increase Latin American votership. Pregnant at the time, this outreach not only served to make the John F. Kennedy an appealing candidate to targeted groups, but it also made him a trustworthy family man in the eyes of the American public. The trend of spouses campaigning for their husbands carried through to the most recent first couple, Michelle and Barack Obama, in their 2012  election as well.

But first ladies are not only helping their presidential husbands; they are helping themselves too.  The political exposure and  political connections gained by being first lady can prove to be invaluable assets in furthering her own political career. Such is the case with Hillary Clinton, who is fighting to occupy the White House once again. Through her tenure as first lady during the Clinton administration, Hillary Clinton earned valuable political experience and connections that allowed her to find the level of political success she has achieved.

By and large, Clinton was the first “modern” first lady. Not only did she serve the functions of campaigning for her husband and elevating the moral image of the first family, but Clinton also found herself immersed in the political workings of her husband’s administration. Stepping beyond the White House, Clinton used her first lady title to spearhead her husband’s health care reform, delivering a speech to a joint session of Congress in September of 1993. She also worked heavily on the Children’s Health Insurance Program and the Adoption and Safe Families Act, cooperating with several members of Congress to pass the Children’s Health Insurance Program and advocating privately at the White House. Clinton’s political legacy as a highly political first lady was further cemented during a hearing regarding whether or not federal advisory committees were required to be open sessions; a judge, however, ruled that, in the eyes of the law, a first lady is equitable to a government employee.

As first lady, Clinton also had the opportunity to learn how to strengthen her public image by enhancing her  political abilities through the Clinton administration. Documents released by the Clinton Library show a first lady who was heavily instructed to stay conversational, encouraging and careful of being too honest and exposing. These documents also depict a first lady that was polarizing, subject to public scrutiny, and unable to handle herself in the public sphere. This analysis and subsequent assistance most certainly provided Clinton with a level of public-image awareness that she may not have possessed as a civilian lawyer, and is certainly responsible for her current political tact. Clinton developed not only her political tact during her time as a first lady, but also her political persona. As first lady, Clinton gained immense exposure to Congress, through pushing legislation and giving speeches, creating political connections in high places. According to a memo from 1993 released by the Clinton Presidential Library, “The first lady’s months of meetings with the Congress has produced a significant amount of trust and confidence by the members in her ability to help produce a viable health reform legislative product with the president.”

When one examines her political trajectory, from politically active student, to civilian lawyer with no interest in politics, to first lady, to eventual senator, cabinet secretary and presidential candidate, Clinton’s deviation from the political tract early in her professional life begs the question of whether she was only riding her husband’s political coattails after. Clinton had no interest in politics when she was first given the chance to make a name for herself in Washington, D.C., opting instead to further her careers in law and academia. However, in 1999, at the tail end of her tenure as first lady, Clinton became the first first lady elected into public office, winning a New York senatorial bid, and cementing her position in DC. Not only was this an impressive victory for an individual with no political presence before, but it was a political anomaly: the only other out-of-state candidate to win political office was Robert Kennedy, who himself also had impressive family ties. Once in the Senate, Clinton continued to push causes she supported as a first lady. This win is made even more impressive given that, before this, Clinton had no prior experience running for public office herself. Further arguments may also emphasize the fact that, on the campaign trail, Clinton was continually supported by both her husband and daughter.

However, analysis of her pre-campaign efforts makes it clear that Clinton put in all the work of a “standard” candidate in making sure to assure her victory—she canvassed the state, and educated herself on both state politics historically, and on what the electorate wanted to see done. In several speeches, she made it clear to the public that, not only was she running independent of her husband’s name, but she was running in order to ensure the interests of the people she was representing. In order to distance her from her husband’s political office, she also invested in the short-film “Hillary” to further humanize her as a candidate. Hillary’s own political know-how, and political capabilities also allowed her to distance herself from the image that voters believed they had of her. Through her studying of the issues that plagued the state, however, Clinton adeptly took her public persona as a somewhat disliked political enigma, and shaped it into a political leader that voters in the state of New York not only respected, but believed in. However, after participating heavily in her husband’s political endeavors as president, it is clear that these are skills she gained through her tenure as first lady.

Although her 2008 presidential run was unsuccessful, Hillary Clinton remained a strong presence on the American political stage, and as a candidate in the 2016 presidential race, has distinguished herself as not only an experienced and shrewd, but groundbreaking presidential candidate. However, when one looks back to the blossoming of her political career, it becomes clear that the transition from Hillary-the-academic to Hillary-the-politico came as she entered the national spotlight as first lady of the United States.