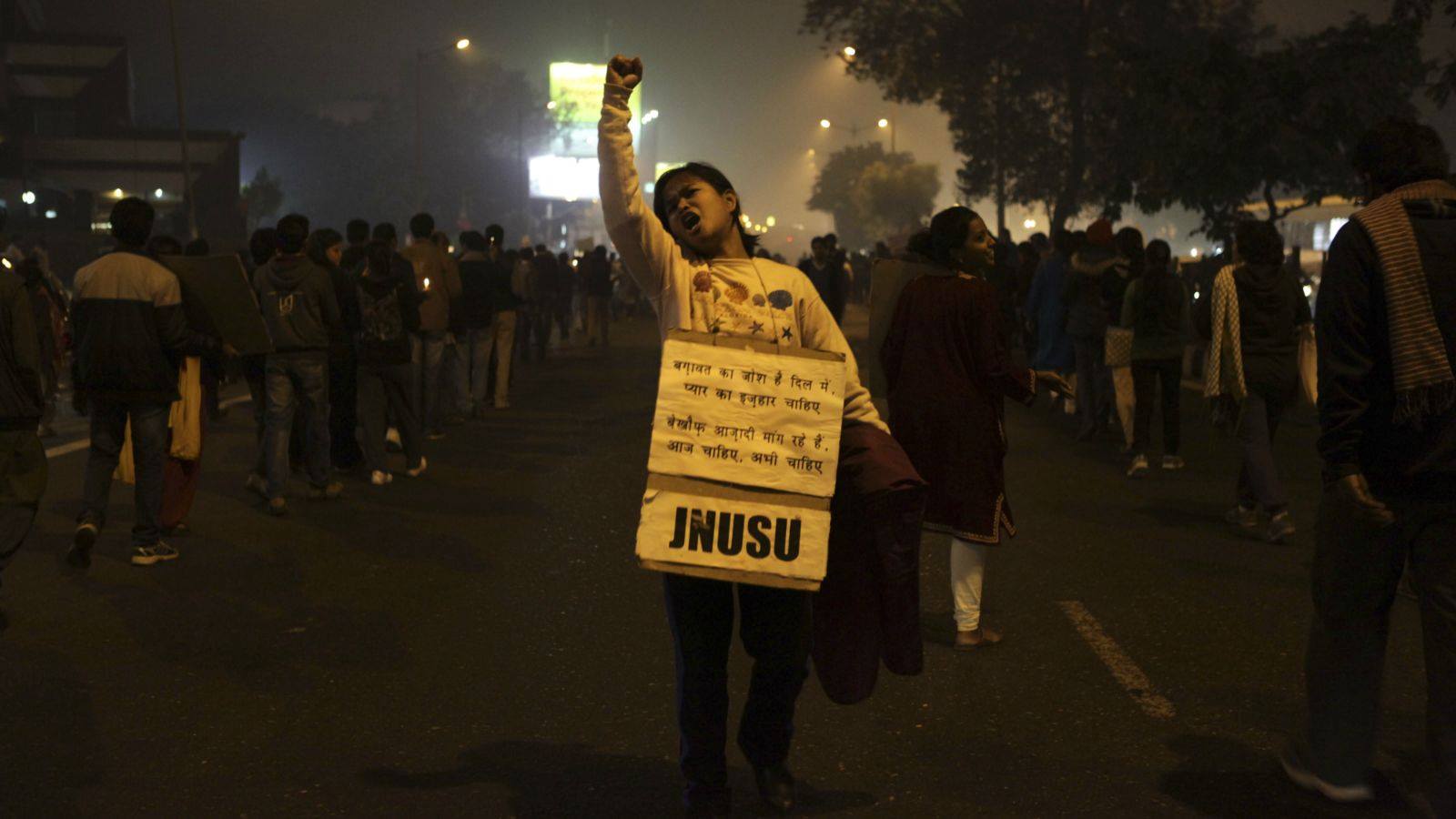 At UC Berkeley, if you plan to take Political Science 1, also known as Intro to American Politics, at any point, then you will likely hear Professor Citrin rant at least once about the increasing erosion of free speech at Berkeley. He will bemoan the tarring of our legacy as the location of the Free Speech Movement by the increasing liberal atmosphere of political correctness. It will likely be the subject of one of your final paper options—is there more free speech at UC Berkeley or a bar in San Leandro?

Over twelve thousand kilometers away, a similar debate rages at the prestigious Jawaharlal Nehru University, which has been compared to UC Berkeley for its center-left politics and successful alumni involved in politics, journalism, and the arts. Here, three students have been arrested or detained after allegedly shouting “anti-India slogans” (reportedly “Kashmir ki azadi tak jung chalegi, Bharat ki barbadi tak jung chalegi” which roughly translates to “The fight will continue until Kashmir is free, the fight will continue until India is ruined”) at an event protesting the execution of Afzal Guru and supporting Kashmiri separatists. The event, which the Delhi public university’s administration later claimed was held without permission, consisted of a march and other cultural and artistic expressions challenging the 2013 execution of Afzal Guru by the Indian government. Guru, a Kashmiri separatist, was charged with and found guilty of a 2001 attack on the Indian Parliament. The execution has been criticized by Amnesty International, novelist and activist Arundhati Roy, and other human rights’ organizations and activists for being done in secret and following a contested and controversial trial of Guru.

At the event, members of Akhil Bharatiya Vidyarthi Parishad (ABVP), a right-wing student organization affiliated with the right-wing and majority Bharatiya Janata Party (BJP) as well as the Hindu nationalist Rashtriya Swayamsevak Sangh (RSS) non-governmental organization, counter-protested, demanding the expulsion of the event’s organizers because of alleged anti-Indian slogans, which were reportedly caught on video. However, in an investigation conducted by the university, the provocative slogans were shouted by outsiders rather than the student organizers.

Perhaps the most famous figure in this case and the figurehead of the controversy is Kanhaiya Kumar, a Ph. D. student in African Studies and the elected president of the JNU Students Union, who was arrested and charged with sedition for supposedly shouting anti-Indian slogans at the march. Based on lack of evidence, Kumar was released on interim bail and has spoken out against his imprisonment and the BJP. Kumar has since gained traction and global headlines, and one of his speeches was read by students from universities around the world, including Yale, University of London, and UC Berkeley, drumming up international support for the students. He remains in the spotlight as he continues to criticize the BJP establishment while pushing for the release of fellow students Umar Khalid and Anirban Bhattacharya, who were also in judicial custody on charges of sedition and granted bail on March 2.

Tensions have flared on both sides, and violence has been attributed to both supporters and opponents of the students. The Indian public is divided, with many older citizens and BJP politicians upset at Kumar and his fellow students for making anti-India comments, disrupting the peace, and committing sedition while studying at a taxpayer-funded university. On the other hand, activists like Arundhati Roy and other students are outraged at the violation of Kumar, Khalid, and Bhattacharya’s civil liberties such as their rights to organize and speak freely without being detained or arrested.

Whether you support or oppose the “anti-India” remarks, Kashmiri separatism, or the execution of Afzal Guru, there is very little and rather dubious evidence that Kumar, Khalid, Bhattacharya, and other students made the remarks that they are charged with sedition for. It is further debatable if the specific remarks called for violence; they certainly didn’t instigate any violence during the event or following it. Violence did occur, however, between supporters and opponents of Kumar during his trial. Sedition, according to most recent landmark Indian cases, has to incite violence or disruption of public order.

The issue then is not one of sedition — it is one of free speech.  In fact, three members of the JNU unit of the right-wing ABVP, the very same organization that opposed and accused Kumar and the event organizers of anti-India remarks, resigned, writing that they cannot be the mouthpiece of a government that oppresses its students.

These former ABVP members pose an interesting question — if a political opponent disagrees with you and governmental policy, should they be arrested and imprisoned?  For those members, along with Professor Citrin and most Americans (publicly, at least), the answer is no. But is this the case for the Indian public?

India is widely considered the world’s largest democracy, but the Indian public’s definition of democracy may be confounded. Internet commenters on The Hindu’s article on the case include in their responses phrases and comments like “Democracy doesn’t mean you have a right to say that ‘I would destroy the nation.’” and “License to expression needs to be bridled with duties towards the nation.” The Hindu nationalist and right-wing current majority party BJP, of course, has never been known to mince words. Home Minister Rajnath Singh released this statement: “If anyone raises anti-India slogans, tries to raise questions on the country’s unity and integrity, they will not be spared.” There you have it—a top government official bluntly and boldly saying that critics of the Indian government and, more implicitly but specifically, the BJP government and its ideals will be punished. This is the state of the world’s largest democracy.

Granted, BJP, Modi-led India has secured itself to an extent with relative  international support and increasingly strong relations with the U.S. and the U.K., among other countries, but if it wishes to retain the national pride that pervades Indian culture and still echoes the great democratic ideals of the independence-era revolutionaries, it may not be the best idea to start violating the civil liberties of student activists. Just ask another iconic student revolutionary, Bhagat Singh. It only motivated him and his friends enough to violently resist and eventually help overthrow the British occupation of India.