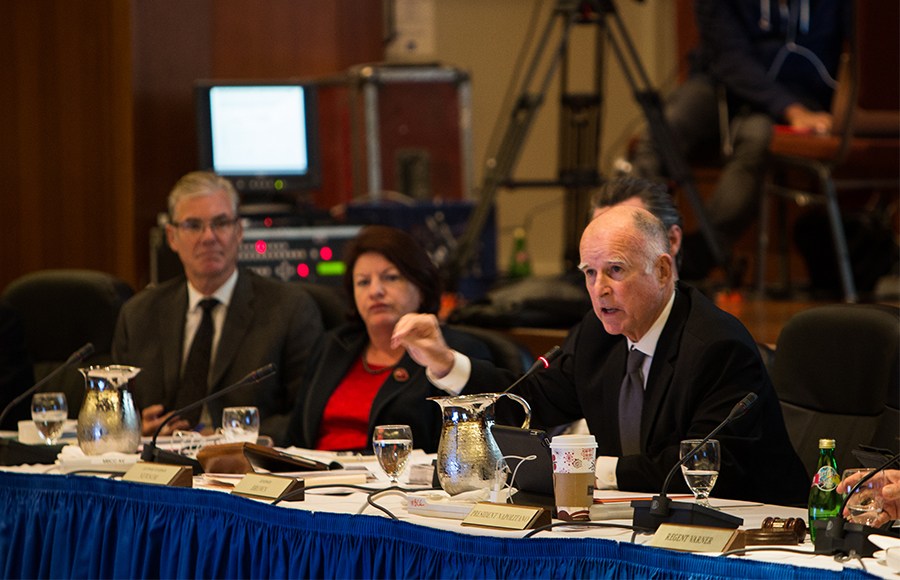 Late last year, the UC Regents passed a budget deal which provided the system with an injection of $119.5 million in new funds, in addition to $25 million from the state in return for enrolling 10,000 new California undergraduates over the next three years, starting with 6,500 this fall. The budget deal also called for the phase out of out-of-state financial aid, which will add an additional $14 million in savings.

Moreover, several lawmakers recently proposed AB 1711, which threatens to withhold UC funding unless the system succumbs to the Regents’ demands to limit out-of-state enrollment at 15.5% systemwide. And 50% of the total funds generated from out-of-state supplemental fees would be dedicated to support enrolling more California residents.

Furthermore, state disinvestment in education continues to reach alarmingly detrimental levels. The entire UC system receives less than 10% of all funds from the state. This is a budget influenced heavily by state politics, on top of the disinvestment of state funding that is at its lowest levels in decades at nearly 10%. Even more disturbing, the UC budget only comprises 2% of the entire state budget!

These troubling developments serve as microcosm of the bigger, more immediate problem of a governing body growing increasingly detached from its constituency. The state has shown a disregard for students’ needs and a tendency to appropriate funds imprudently.

Primarily, the Regents’ display of negligence in failing to preserve a student body culminating on diversity counters the UC’s longstanding principle of diversity and inclusion. In particular, the most concerning aspects of the recent bills stem from the significant repercussions of severing the out-of-state financial aid pipeline, which would wrangle from the flagship Berkeley campus the socioeconomic diversity it so desperately prides itself on. Bringing students together from various backgrounds provides an environment where different ideas and viewpoints can be shared, an aspect that studies have shown to be fundamental to intellectual growth.

Then there’s the issue of imprudent spending and haphazard appropriation of funds. On one hand, you have government officials bribing the UC system to enroll more students in exchange for more funding. However, many of the funds offered are not appropriated to aid with elevating the condition of student life and quality of education. A huge portion is aimed to repay overdue pension costs for faculty members. Furthermore, out-of-state (OOS) supplemental tuition serves as a large source of income for the UC system as students must pay more than twice the amount in-state students pay, chipping in an additional $26,682 in supplemental tuition per year. It would follow conscious logical reasoning that OOS enrollment should be increased rather than capped.

The legislators counterintuitively believe otherwise. They believe, through the AB 1711 proposal, that not only should OOS enrollment be capped, but the money raised from OOS students should be utilized to fund more in-state students, rather than to fix outdated infrastructure, to hire more faculty to the overpopulated, seismically unsafe campuses, or to update classrooms with 21st century resources.

As such, the confluence of measures to restrict out-of-state enrollment is more of a political ploy than a sincere development to maintain the renowned recognition of the UC system.

Yet, the lawmakers claim they know what’s best for our institution, using the hackneyed rhetoric that symbolically demonstrates their greatest strength—orating skills: “It’s great for UC” and “It’s great for California”.

There is a stark contrast between how lawmakers view the UC system as an outsider from their offices and what the reality of student conditions here actually are.

It’s one thing to say, but another to experience. It’s hard for the legislators to feel any sense of an ongoing crisis by simply lobbying for their self-interested policies on the steps of Sacramento.

Our campus is already heavily populated; our density is reaching maximum capacity. Student housing problems continue to dominate. Many doubles have undergone forced conversion to triples or quads. Beyond freshman class standing, housing is not guaranteed. In fact, the city of Berkeley is running out of places to construct affordable housing, although the city itself has enforced a quota to restrict the number of students the university can enroll. Berkeley is marred in the middle of a housing crisis. Only 27% undergrads live in on-campus housing, and housing in the heart of the Bay Area remains one of the most expensive places throughout the nation. Have the legislators considered these aspects?

And yet the legislators decided to overcrowd the Berkeley campus with 750 additional California residents this fall.

This is a quintessential demonstration of uneven representation in the UC Regents, the governing power of the UC system that consists of 18 governor-appointed members and 7 elected government officials (ex officio members). Only one out of its 26 members is a student and 18 chairs hold domineering 12-year terms. It seems foolish to believe that the Regent members, who have executed orders from increasing 10,000 California enrollment university-wide to capping out-of-state enrollment would have the slightest inclination to make the most prudent decisions and goals on higher education without witnessing and understanding the daily studying and living conditions occurring at any of the campuses of the UC system. The Regents seek to prioritize getting as many high school students into college as possible, even if it comes at the cost of the student quality of life.

The University of California, as explained by proponents of increased in-state enrollment themselves, was created for the students, not for the state or its legislators. As such, shouldn’t students’ voices be represented in larger numbers? It’s the simple foundation of democracy, the very core principles our country was founded on.

This is a complete betrayal from who we are as students. The notion that legislators would play politics with the education of young, bright college students is disgusting.

They should learn that academia and politics are mutually exclusive. It just and hasn’t worked that way.

When you talk about education, it’s much more than accessibility. It’s about not devaluing the quality of education at the top flagship campuses; it’s about increasing the diversity of undergraduates to prevent the homogeneity of a student body.

And politics should always be excluded from the conversation. It’s damning to think otherwise.