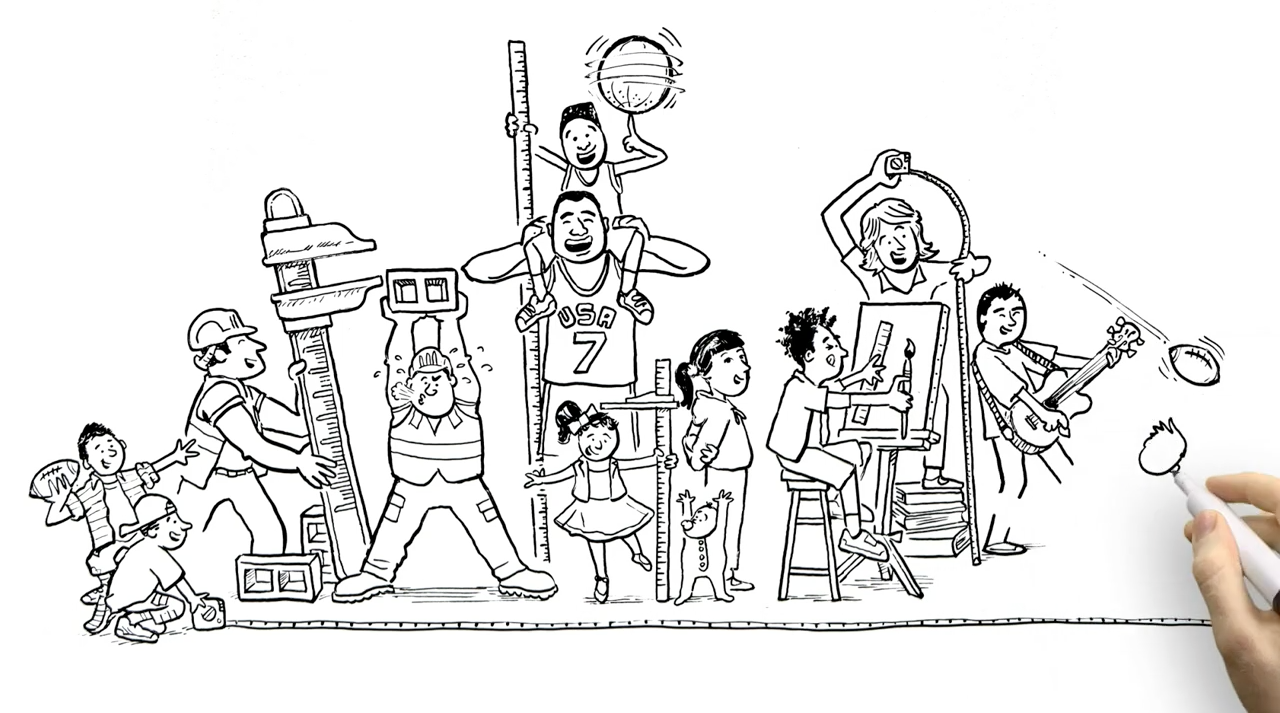 “Like it or not, life is full of measuring sticks,” narrates an upbeat female voice. A marker-wielding hand draws a scene of cartoon people happily interacting with measuring sticks in their day to day lives, including curiously enough, a boy on a stool holding a ruler and a paintbrush up against a canvas. “How smart we are, how fast we are, how well we can, you know, compete,” it continues, “But up until now it’s been pretty hard to tell how well kids are competing in school.” I pause the video right there. Since when was the purpose of education to measure how well children can compete? Granted, the way educational institutions work today is no less than a competition, but to articulate the purpose of education as a measure of competitiveness is more than a bit unsettling. Surely, these aren’t the opening lines to a “Three Minute Video Explaining the Common Core State Standards” by the Council of the Great City Schools on the Common Core Works website, are they?

It’s no question that the American education system needs help. The National Center for Education Statistics reports that “[i]n 2011, the [US] spent $11,841 per … student on elementary and secondary education, an amount 35% higher than the OECD (Organisation for Economic Co-operation and Development) average of $8,789.” Yet the Common Core video asks, “Is a graduating senior in … St. Louis as prepared to get a job as the graduate in Shanghai? The answer … is no.” America boasts the number one public university in the world – so what’s wrong with American primary and secondary education?

The Common Core State Standards Initiative attempts to solve this problem without answering the question. Created in 2009 and touted as an improvement over the No Child Left Behind Act (NCLA), Common Core is a set of standards in Mathematics and English-Language Arts that is meant to create uniformity in educational policy in the United States. Previously, states evaluated students’ proficiency through standardized tests, yet each state set its own standards. As a result, expectations varied widely across the country, and NCLA was regarded a failure. However, the backlash over Common Core would lead one to believe that it was a downgrade from NCLA. Criticism ranged from legitimate concern over rash implementation, to the absolutely absurd, such as one Florida lawmaker’s idea that the Common Core will “attract every one of your children to become as homosexual as they possibly can.” A more realistic conservative critique is the ideological opposition to the government becoming involved in local politics, especially education. In this case, the heavy incentivization for the immediate implementation of Common Core standards comes through the Race to the Top Initiative, which grants a significant monetary fund to the winning states that apply to compete in it. Those that implement Common Core are not guaranteed to receive funding, which creates the conundrum that states that most need the monetary aid may be unable to meet the standards to receive it. The raucous debate over Common Core may have died down, but this catchphrase for a new education system in the US is still a pertinent issue.

Then there’s public opinion. Secretary of Education Arne Duncan controversially remarked that opposition to Common Core mostly came from “white suburban moms who—all of a sudden—realize their child isn’t as brilliant as they thought they were, and their school isn’t quite as good as they thought they were.” Yet parents have a right to be frustrated. The sudden overhaul of school curriculum left many parents in the dark regarding their child’s progress and the new techniques being taught. Students have similar concerns. While a standardized test is perhaps a necessary evil to use when objective personal evaluations of each student are highly unlikely to be conducted, students’ patience towards testing is worn thin. In the last few years, select grades of students were chosen to calibrate the new Smarter Balance tests, which are in line with Common Core. The tests were intended to be a more fluid evaluation of students’ abilities instead of being yet another multiple choice test. By itself, this could be considered an advantage, but when students are faced with the new Smarter Balance tests in addition to multiple SAT I, SAT II, PSAT, CAHSEE, CST, AP, ACT, and final exams, all within a relatively short time frame, it is no surprise why such vehement opposition has arisen to Common Core, despite its association with just one more standardized test.

“Better” standards are not the magic wand for solving America’s education woes. In fact, with poor implementation, more problems are created than are solved. The lack of rigorous field-testing to see how students would respond and a dearth of adequate new teaching material for teachers to use left all involved in the education system unsure how to proceed. Had these steps been taken before Common Core was incentivized by Race to the Top, it would have made the transition less frustrating and controversy-stoking. In the words of Nobel Prize-winning economist Milton Friedman, “One of the great mistakes is to judge policies and programs by their intentions rather than their results,” and this is certainly the case with Common Core.