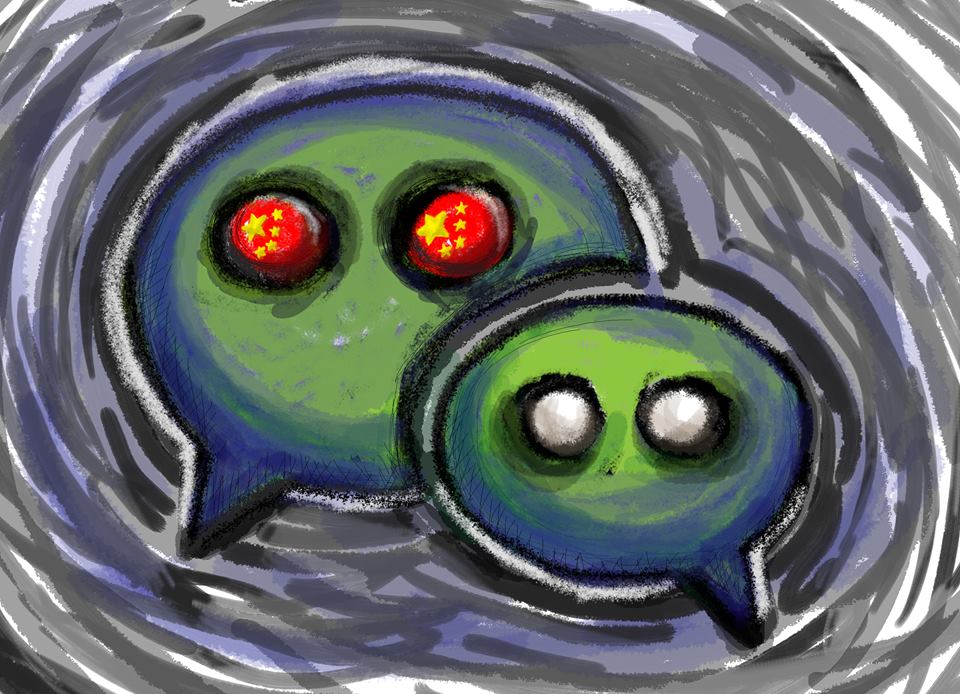 When News Speaks for the Party

She had recently updated the popular Chinese instant messaging app on her iPhone and was logged out because she forgot her password. WeChat instructed her to choose three friends for identity verification. It then sent texts to her friends, including me, with verification codes. I received a text from her cell phone number, reading: “Send a verification code to my WeChat please! Thank you! 957496”

“Terrifying, isn’t it?” She added. “They could see anything you send to anyone.”

“They” are the two million internet censors reporting to the Cyberspace Administration of China. Monitoring 600 million people on WeChat and 200 million on Weibo (China’s version of Twitter), they delete speech they perceive as damaging to the Communist Party of China (CPC). The Chinese government intrudes upon people’s private lives to maintain political stability, but that’s not the end of the story.

Media control has recently taken a sharp turn in China, with the CPC starting to reinforce party loyalty among news stations. Eradicating dissenting opinions, China’s leaders hope to foster much needed political stability. However, lessons from history suggest otherwise, as heavy media control often leads to misinformed decisions from the top and disastrous consequences at the bottom. China’s tightening media control is such a step towards catastrophe, but today’s intertwined world cannot afford the reappearance of historical calamities. It is crucial that China’s leaders reverse the direction of media control, now.

The unspoken truth is that media stations in China already exhibit party loyalty by nature of the system: they must not spread information damaging to the CPC, and, regarding major events, all media have to report the CPC official media Xinhua’s news word-for-word. Just ask a friend who has been to China what they have available to watch on TV everyday at 7PM: every station re-transmits to China Central Television’s (CCTV) program “News Broadcast”; foreigners who don’t know their way around have nothing else to watch.

Media freedom beyond that limitation, however, varies from period to period; the harshest of which dates back to the 1950s, a turbulent era of constant political reform. The Great Leap Forward, initiated in 1958, was a disastrous policy that lead to more than 15 million deaths, the greatest famine in the history of mankind. In these crucial times, the media went along with the party, making loyal but false reports to the leaders, who blindly stayed optimistic, oblivious to the calamities happening in the real life.

History is repeating itself once again.

On February 19th, 2016, Chinese President Xi Jinping toured China’s major state-run news organizations with a clear message: “China’s media must unflinchingly promote the party line and serve as a faithful tool of ideological struggle.” David Bandurski, a researcher at the Hong Kong-based China Media Project, remarked: “It’s a very sensitive time economically, and even without the downturn, China is facing a whole array of really complicated social issues. There is a nervousness [within the Chinese leadership], and this makes media and information control that much more of a priority.”

To the public, Xi’s order was simple to understand: if not so before, starting now, news speaks for the party.

The visits caused considerable criticisms on social media, the most provocative of which came from Chinese real-estate mogul Ren Zhiqiang on Weibo. Known as “The Cannon” for his outspoken stance, Ren lambasted the idea that media should serve the CPC: “When did the ‘People’s Government’ become the ‘Party’s Government’?” he wrote. “Does it run on party dues?”

Internet authorities quickly responded: claiming that Ren used the account to “spread illegal information” that had a “vile influence,” Ren’s Weibo account was shut down two days later. His local Party committee even hinted further repercussions. The Wall Street Journal article “China’s Muzzled Microbloggers” noted a wave of celebrities’ accounts closing on Weibo in the wake of Ren’s comments. In the end, virtually all criticisms of Xi and the CPC disappeared on the social media.

On the other hand, popular media outlets do not set great examples for netizens to follow. The BBC reported one ironic case in which a prominent Chinese financial magazine by the name of Caixin was censored immediately after publishing a piece on censorship in English. The government’s official media accounts are no role models, either. I myself witnessed a ludicrous exchange on Weibo in which The Communist Youth League, regarded as the stepstone to the CPC, posted propaganda narrating: “I’m in love with [the CPC]. [It] is very determined of his belief, claiming it’s Communism. I don’t understand it, but I simply feel it sounds terrific. I support [it].” A microblogger by the alias MEEEOW commented and retweeted: “This is the most depressing post in the history of Weibo.” Then, to my utmost surprise, the Youth League replied: “I just like the way you feel so cynical, yet you can do nothing about it.” It even added a smiley face emoji, often used satirically in China.

The person managing the Youth League account is just one of the many irresponsible managers of government outlets feeding into Chinese people’s minds. No wonder many teenagers in China can be criticized for lacking creativity or critical thinking abilities: media arguments fail to use reason and logic, appealing to party loyalty instead. Citizens in China are too often silenced and repressed, without the means to argue or fight for freedom—even when their opponents are poorly educated wage-earners standing on the moral high ground of patriotism. Pondering my friend’s experience and the prevalent silencing treatments on various platforms, I have come to a conclusion: nobody should voice their real opinions anywhere in China. Nobody dares to these days.

Delegates to the annual Two Sessions, a meeting where representatives from all over the country meet to discuss problems and pass legislation, are evidently worried. Asked about the controversy involving Ren’s case on Weibo, Nobel laureate Mo Yan brushed off the reporters’ request with just one word: “Lunch.” As China Digital Times reported, prominent film director Feng Xiaogang tried to exit a meeting room under cover of a baseball cap. When asked about Ren, Feng raised a finger to his lips. “Shush,” he whispered, before walking away.

The New York Times asserted that “the annual meetings come amid a tightening ideological atmosphere that is chilling speech”; clear are the ruinous legacies of dissolving media freedom. When the delegates of the Two Sessions, typically rich and powerful, are afraid of voicing their opinions, the lingering effects on the people will only present itself with greater sacrifices.

Once the media starts to speak for the party, people’s interests will be neglected. As reporter Zhang Xin argues, the emphasis on party loyalty among the media today is a great step backward in China’s history of reform, heading to a nationwide disaster. The prioritization on media loyalty fosters dissent and anger, plus it forbids China’s leaders from hearing back from the people. Quite contrary to leaders’ belief, monotonous reports on the merits of Party policy work against the goal of political stability. It’s not emphasizing the Party’s good works that elongates stability, but the underreporting of bad works that threatens stability. China cannot afford the repeat of historical tragedies, and it takes candid, humble minds of China’s leaders to recognize the mistake.

News should speak for the people, not the Party. China’s leaders should reverse the direction of media control, and it must be reversed now.