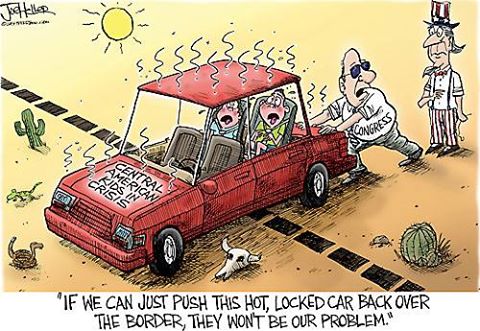 Where Are They Now?

The Unfinished, Yet Uncovered Saga of the Central American Migrant Crisis

When news broke in June 2014 that an unprecedented 50,000 unaccompanied Central American children had arrived at the U.S. border since October 2013, the White House declared it an “urgent humanitarian situation,” drawing the attention and concern of the U.S. government, media, and public. By September 2014, Central American migrant flows returned to their pre-crisis levels, and the issue of unaccompanied child migrants receded from the headlines.  Just looking at the pure numbers, it may seem as though conditions have improved in Central America’s Northern Triangle countries of Honduras, Guatemala, and El Salvador, or that the U.S. has opened up routes of safe, legal immigration. However, the same depressing reality remains: none of the root causes have been addressed and migrants continue to flee the same brutal conditions—they just are not reaching the U.S. border en masse as before.

When the hordes of unaccompanied minors reached its peak of 10,622 in June 2014, attention quickly centered on the stark insecurity in countries ridden with drug trafficking, gang violence, lack of economic opportunity, and crushing poverty. However, as Honduran journalist Mario Cerna pointed out, there has been a migrant crisis for decades, with as many 80,000 to 100,000 migrants fleeing Honduras each year; the spike of unaccompanied minors across the U.S.-Mexico border just brought attention to the migrant crisis.

By September 2014, there had already been a dramatic decline in the number of migrants reaching the U.S. Border.  The three temporary shelters the U.S. had opened up in July 2014—serving a total of 7,700 unaccompanied children—as well as the large family detention facility, were closed.  The decline is attributable to both a national and judicial U.S. response, and a U.S.-influenced Mexican crackdown.

The U.S. also established the Central American Minors (CAM) Refugee/Parole Program, an in-country refugee service to provide certain qualified children in El Salvador, Guatemala and Honduras “a safe, legal, and orderly alternative to the dangerous journey”. However, as of November 23, 2015, Rosenblum reports only six kids have come through the program—compared to over 5,000 who have applied. “While it does make sense to do humanitarian screening as close to the source as possible and allow for safe travel, the delays are a disincentive for those who face danger at home,” said Rosenblum.  According to a publication by the Migration Policy Institute in August 2015, “The Central American Minors Refugee/Parole Program may alleviate the unaccompanied minor flows to an extent. But the program’s limited numbers and narrow eligibility criteria are not likely to constitute a realistic alternative at a scale that can significantly reduce these flows to the U.S. Whether the program ultimately will provide humanitarian protection to sizable numbers turns on questions that cannot yet be answered.”

Mexico responded by intensifying immigration enforcement as part of Programa Frontera Sur (Southern Border Program), largely influenced by the United States.  “Mexico doubled its deportation rates to the Northern Triangle since 2013, projected to be at 120,000 for 2015. Apprehensions of unaccompanied minors increased from 4,000 in 2011 to 23,000 in 2013, and are projected to be at 34,000 this year,” said Rosenblum. Immigration checkpoints and raids have multiplied along migrant routes, and migrants are now prevented from boarding the freight trains that run north through Mexico and to the U.S. border—colloquially know as “La Bestia,” or “the beast”—which have historically been the largest transporter of illegal immigrants. “This all contributes to the push back against the narrative that it is easy to get to U.S.,” said Rosenblum.

The responsibility for resettlement and integration into local schools and the community has largely shifted from the national level to the state and local level. More than 77,000 unaccompanied minors from Central America were released to communities throughout the United States between October 1, 2013 and August 31, 2015. Many of these children have been placed in under-resourced communities, which have struggled with integrating the newcomers. Although there exists no follow-up services or information after resettlement, their service providers report that these children are coping with physical and mental health challenges from their traumatic travel experiences, difficulties learning in English, and distressing cultural changes.  Furthermore, the influx of migrants has been a very divisive issue on both sides of the line; while many call for increased public assistance to these immigrants, others complained of the burden immigrants have placed on their communities.

The crackdown on immigrants has resulted in increasingly militarized surveillance and patrol of the southern frontier, both in Mexico and in the U.S.  However, this hasn’t stopped migrants from attempting to come, only increasing the danger in the routes they choose.  After the initial decline, the number of migrants from the Northern Triangle “have been trending up pretty steadily since 2014.  In September 2015, 4500 unaccompanied children and 5300 family units were apprehended, compared to pre-surge levels in September 2013 of 3500 children and 2000 family units,” said Rosenblum.

Friends working with migrants in Chiapas, Mexico, along the Guatemalan border, report that while not much has changed in the flow of migrants and accessibility of coyotes, the routes themselves have changed.  La Bestia, for example, is now replaced with more perilous and lengthy detours to avoid the police checkpoints, increasing the risk of robbery, rape, abduction and death. A friend who lives in San Luis Potosi, Mexico, a major thru-city for Central American migrants, reports that “the numbers of immigrants have definitely decreased.  The insecurity and danger of organized crime has only intensified along the route, and it’s very common to encounter immigrants sick and mutilated from accidents.”

Additionally, there are costs to being deported. After losing money spent on travel, they may be more desperate than before, and the stigma for having tried to immigrate and fail may put many migrants at higher risk of danger. A recent Human Rights Watch report concluded that the increasing use of so-called “expedited removals” of migrants along the U.S.- Mexico border was returning many to potential danger. “Detention has been expanded and people are increasingly being put into fast-track deportation procedures in which their claims for asylum are not being properly considered,” said Clara Long, an immigration researcher for Human Rights Watch. When deported, many of the migrants express fear of returning home, a fear not unfounded.  In fact, studies show it may be more dangerous for migrants when they return to their countries after being deported. A Guardian investigation into the consequences of Obama’s immigration crackdown found three U.S.  deportees have been murdered shortly after returning to El Salvador, Guatemala and Honduras.  A forthcoming academic study found as many as 83 immigrants killed since 2014 after being returned home.

Immigrants will not stop attempting to flee as long as their choice remains between possible death while fleeing or more imminent death at home.  “All of the underlying push and pull factors that motivated the surge in the first place are still in place and are arguably more intense than they were a year ago,” said Rosenblum.  “Instead of addressing this as a challenge to border security, we should be addressing this as a refugee crisis.”

Instead of simply fortifying Mexican and U.S. borders, increasing the dangers of the perilous route and ignoring those who have already come through, the U.S., Mexico, and the Northern Triangle countries should focus on humanitarian relief, much like the Alliance of Prosperity in the Northern Triangle. Although solutions like these won’t pay dividends from an immigration perspective for decades, it is imperative that we address the whole problem, instead of applying piecemeal solutions to take child migrants off the headlines and allow our consciousness’ to be put at ease.