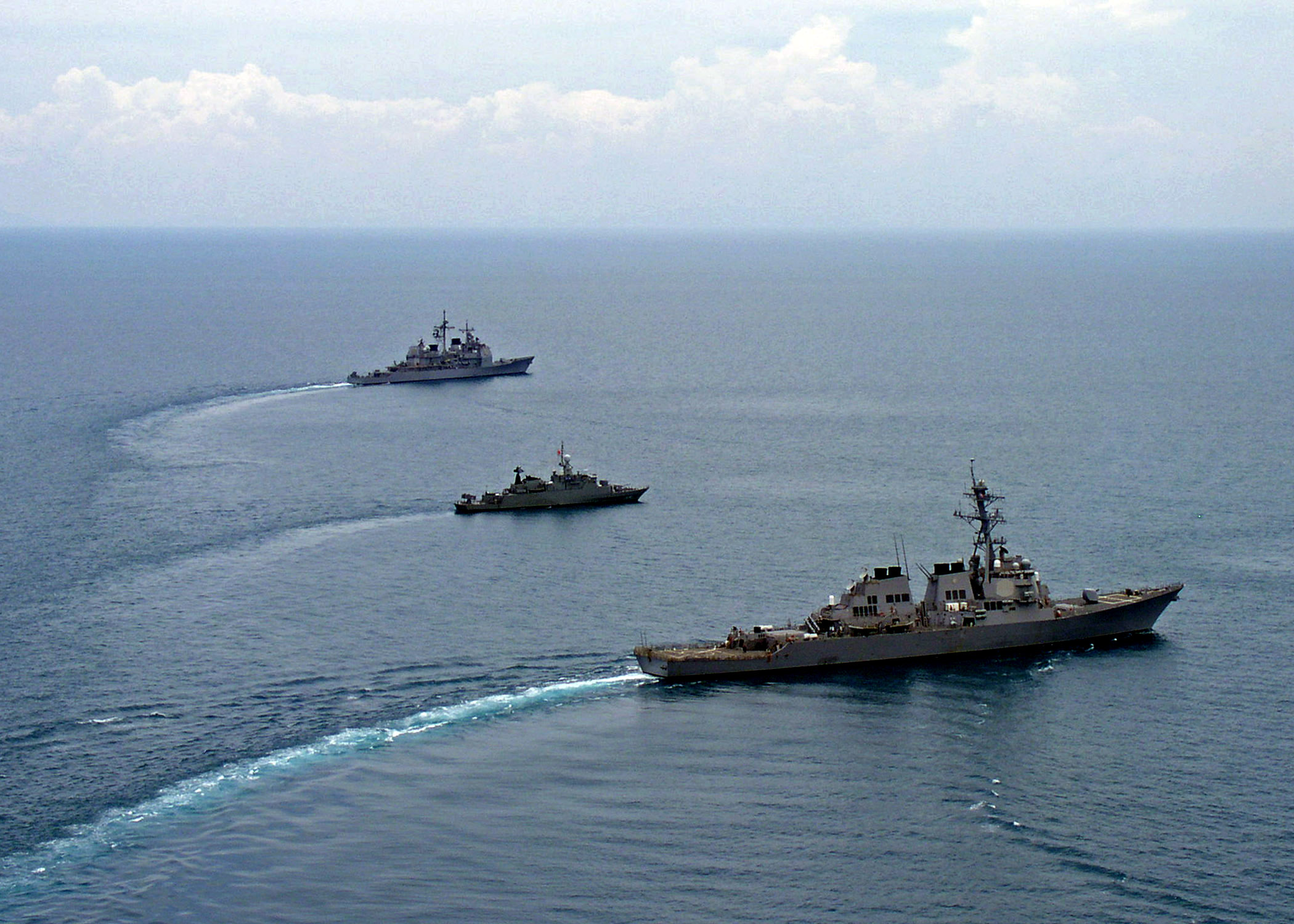 Navigating the South China Sea: Choosing a Path to Peace

Tensions are escalating between the U.S. and China over the issue of the South China Sea. An area of China’s self-proclaimed exclusive economic zone (EEZ), the South China Sea is a coveted strategic area of territory. While the U.S. hopes to establish freedom of navigation across these waters, in great part so that it may continue patrolling military vessels there, China disputes the right of the U.S. to have any presence in the sea. Tianlang Gao and JJ Kim offer diplomatic solutions for the two nations before things boil over.

The Trap of Power Politics: The U.S. should halt FONOP for a peaceful solution, by Tianlang Gao

The U.S. Freedom of Navigation Operation (FONOP) in the South China Sea is an excellent example of realpolitik at work. A classic political realism assertion, realpolitik predicts a state of perpetual conflict among great powers. With China’s rise, argued renowned realist John Mearsheimer, the U.S. will spend enormous effort to prevent China from achieving regional hegemony.

Last month, the USS Lassen, a guided missile destroyer, travelled within 12 nautical miles (nm) off the Chinese-occupied Subi Reef in South China Sea, aiming to challenge Beijing’s territorial claim over disputed resource-rich waters. China, in return, expressed strong opposition and determination to guard territorial integrity. As both sides competed for regional dominance, tensions mounted. To avoid a military conflict that no nation wants, the U.S. should halt its FONOP to compromise for a peaceful solution.

The conflict began with the alleged island-building in the South China Sea. Satellite images show China gave rise to seven artificial islands in the Spratly Islands at astonishing speed, even constructing military facilities capable of sustaining military patrols on three of these islands. The core of the conflict rests in that the U.S. and China understand the role of these new islands very differently.

The U.S. considers the construction as a threat to its commercial interests, pointing to the approximately $5.3 trillion in bilateral trade going through the South China Sea every year. Strategically speaking, the security of U.S. allies, including the Philippines, now faces an unprecedented risk as a result of greater Chinese sea control. It is thus up to the U.S. to provide security and assurance to its partners by “maintaining a robust presence” there.

China’s Ministry of Foreign Affairs, on the other hand, altogether rejects the label “artificial islands,” claiming that construction on China’s own territory is within the realm of Chinese sovereignty. “China’s sovereignty and relevant rights over the South China Sea,” the Ministry appeals, “have been formed over the long course of history and upheld by successive Chinese governments.”

Yet the situation may be less alarming than U.S. media reports imply. American media elevates tension around this issue by leaving out the following fact: China is not the first to practice island-building as a means to assert territorial integrity in the region. Vietnam, Malaysia, the Philippines and Taiwan have all expanded islands in their alleged sovereign territory, each operating at least one existing airstrip ready for military use. Also suspiciously absent were reports on the fact that the USS Lassen entered 12 nautical miles off the coast of islands occupied by Vietnam and the Philippines as well, downplaying the U.S. argument that it could exercise FONOP anywhere in international waters. By ignoring these cases, the U.S. media by and large is responsible for promoting an incomplete and misleading image of China’s management of territorial affairs.

Technically speaking, the USS Lassen FONOP was not a real FONOP either. As the Diplomat points out: “under United Nations Convention on the Law of the Sea (UNCLOS), a warship on international water may carry out its whole array of activities, including launching helicopters, turning on fire-control radars, and carrying out arms exercises.” These activities are prohibited when sailing in another country’s 12 nm territorial waters, a condition known as “innocent passage.” In U.S. Navy’s first South China Sea FONOP, the destroyer traveled within 12 nm of the new islands, then left quietly and quickly, behaving exactly as it would in an innocent passage. In doing so, Lassen’s voyage actually reinforced China’s claim that Subi Reef has a 12 nm territorial sea, far from contesting the Chinese position.

Many find it ironic that the conflict in South China Sea is portrayed as an issue between the U.S. and China. As Chinese state media Xinhua points out: the U.S., being thousands of miles away from the region, is not a country directly involved in the conflict, nor should the conflict become a dividing issue between China and the U.S. Despite opposing China’s territorial claim, the U.S. Navy FONOP failed to demonstrate the American resolve. Future U.S. FONOP near these islands, if similarly inefficient, would create unnecessary tension at the expense of demolishing agreements after decades of diplomatic dialogue. The U.S. should therefore halt its FONOP altogether.

The islands in South China Sea are of China’s core national interests, implying that the conflict will not be settled with ease. The exhibition of power politics in the South China Sea today, understandably, is an inevitable conclusion from realist theory. But this issue, as a significant step toward future China-US relations, deserves more diplomatic negotiation. The U.S. should desist from engaging in any military operations under the pretense of FONOP to refrain from further provoking China. The Chinese side, too, can demonstrate the peaceful nature of its construction by inviting international observers onto these islands. These are just a few of the many possible means to avoid the trap of power politics and prevent the elevation of this conflict to a militarized level—possibly the last thing the world wants to see between the U.S. and China.

Before Things Go South: The Case for a Softer Chinese Stance, by JJ Kim

A cluster of small islands in the South China Sea has become an unprecedented military flashpoint. China, Taiwan, and a number of Southeast Asian nations—most notably the Philippines—all insist that the Spratly and Paracel Islands are their territory and show no signs of backing off in the near future.

Among the claimant states, China has been the most provocative, devoting significant military resources to deter any incursion into what they claim is Chinese territory. Of particular importance, China is building artificial islands off its southern coast to justify extending its maritime borders towards the islands. This leaves ships open to PRC intervention on the grounds that they are sailing on “rightfully Chinese” waters, which constitutes a breach in Freedom of Navigation (FON), a principle of international law that protects ships from state intervention. As a result, the U.S. Navy recently carried out Freedom of Navigation Operations (FONOPs) in the South China Sea in order to reaffirm its support for FON, much to China’s discontent. While the FONOPs are far from perfect, it is a necessary check against potential Chinese aggression. The onus is on China to abide by international law and halt its artificial island construction; alternatives risk instability at best and at worst, great power war.

LAYING DOWN THE LAW

Some argue that Chinese artificial island-building has little immediate impact and that media reports exaggerate to attract viewers. Such statements, while not false, obscure a dangerous optimism that fails to see the larger geopolitical picture. The breach of FON is certainly not particularly damning in and of itself; however, its implications on international law are enormous. The Philippines are currently seeking legal solutions in the form of an arbitral tribunal. The tribunal found that China’s territorial rights are significantly less than what it claims, which has led it to denounce the former as having no jurisdiction. However, regardless of the tribunal’s legitimacy, there is significant pressure for China to comply with international norms. International law is one of few existing checks on superpowers bullying weaker powers, and the Spratly Islands are a key test case for Chinese reliability in the face of norms that go against its interests. Airstrips that did not exist two years prior have been bolstered with defensive structures, and the moment they are armed with anti-air or anti-cruiser capabilities, it will be nearly impossible for competitors to assert their claims. A continued Chinese disregard for international law forces them into a position where they must either concede and lose both face and resources, or accept the risk of military conflict with China. If the Philippines, a U.S. ally, ends up fighting China, the U.S. will be drawn into war with devastating consequences.

The strongest argument for the withdrawal of U.S. provocations in the South China Sea is based on the security dilemma that the U.S. and PRC pose against each other. Seeing the PRC’s rapid development as a breach to security, the U.S. made the Pivot to Asia a central foreign policy initiative in an effort to counterbalance China’s rise. Perceiving the Pivot as provocative, China has become more aggressive in its territorial claims, flexing its military muscle in the South China Sea. For some, the logical conclusion to these events is a spiral into warfare and conclude that the U.S. should give concessions in order to break the cycle and facilitate a reciprocal Chinese response. However, a closer look at the picture provides a contrary vision. Neither the U.S. nor China wish to deliberately fight each other in a war (as opposed to the scenario isolated above, in which the U.S. would be drawn into conflict). Both actors understand that it would be politically and economically devastating and would avoid escalation; however, the palpable threat of escalatory conflict pressures claimant states to sign piecemeal diplomatic resolutions. While these small agreements are by means silver bullets to the dispute, they are small victories that can pay dividends in the future by building trust in a region that needs it greatly.

Chinese actions in the South China Sea are not entirely irrational; the potential gain in resources is substantial enough that any nation would stake a claim on the disputed islands. However, it has been uniquely excessive by breaking international law and militarily pressuring weaker claimant states to withdraw. Freedom of Navigation Operations have been a meaningful enforcement of international law and sends a signal that China’s only serious military competitor will not allow for norms violations. China must face the possibility that it will not be the sole ruler of the South China Sea.

JJ Kim is the Senior Editor of the World Section at Berkeley Political Review. He is a 4th-year studying Political Science and Chinese .