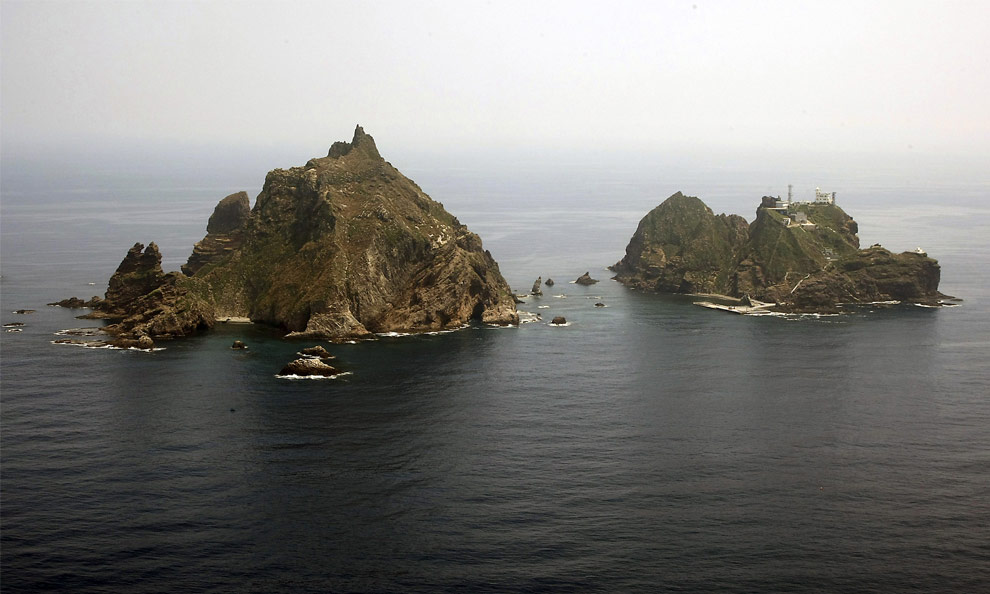 “Isle Have What She’s Having”: Territorial Tensions Between Japan and South Korea

Located over 200 kilometers from the Korean and Japanese mainland, it consists of two large rocks surrounded by thirty-five smaller rocks (with a total surface area of less than 0.2 square kilometers) and is nearly uninhabitable by every means.

Yet it is the centerpiece of one of the biggest obstacles in modern-day relations between South Korean President Park Geun-Hye and Japanese Prime Minister Shinzo Abe.

In fact, it is so salient that even its name cannot escape the reach of politics. Calling it Dokdo or Takeshima would immediately seal one’s position in favor of South Korea or Japan, respectively. Some call it the Liancourt Rocks after Le Liancourt, a French whaling ship that nearly crashed into the islands in 1849, but for the two East Asian nations, a commitment to neutrality in a political dispute of such vital importance is seen as disinterest at best, and at worst, a tacit alignment against what both nation-states claim to be “the truth.”

Dating back to the Japanese surrender in World War II, today’s dispute over Dokdo/Takeshima has actually become so pronounced that its impacts are being felt in other sectors of Korean-Japanese relations. The two nations do little to pull punches when it comes to an issue of national concern: Korean schoolchildren are taught that “독도는 우리땅”—Dokdo is our land—from an early age and conditioned to believe it without question until grade school history class, where pragmatism and objectivism are secondary when analyzing Korean and Japanese claims to the islands. Japanese endorsement of Takeshima Day provides little doubt that Japan views the issue in a similar fashion.

Given the dispute’s current path, any significant progress in its resolution will be near impossible absent new paths that force both South Korea and Japan to challenge their most basic assumptions. Understanding why and how the dispute has become so important is critical for this task.

The rocks are nearly—but not totally—uninhabitable because they do host permanent residents. Kim Seong-Do and Kim Shin-Yeol, two Koreans married to each other, comprise the totality of Dokdo/Takeshima’s population. Having lived there for decades, they are more or less South Korean heroes, insignias of national pride that crosses the East Sea, also known as the Sea of Japan (Mr. Kim has previously claimed that if the Japanese attempt to take the rocks by force, he would immediately ask his wife for a rifle). The islets also host a watchtower and living facilities for the South Korean coast guard. Japan, on the other hand, has neither permanent residents nor a temporary living quarters, making Dokdo/Takeshima indefinitely South Korean territory de facto (by effect), but not de jure (by law), which is where the heart of the dispute lies.

The long and complex history of the land claims made by the two nations betrays the simplicity of the most feasible solution: put it on paper. The International Court of Justice (ICJ) is the judicial apparatus of the United Nations and serves to settle legal disputes. Assuming both countries agree to the protocol, the ICJ would weigh each country’s claims and historical evidence that supplement them and determine the islets’ owner once and for all. Japan has offered South Korea three times to take the Dokdo/Takeshima dispute to court; however, South Korea has rejected every single one of Japan’s offers on the grounds that there is no dispute to be had, and that the rocks are unequivocally Korean territory. This puts South Korea in an awkward position of adamantly declaring sovereignty claims but balking in the face of international law. Some speculate that this is precisely what Japan wants; given the near-perfect irony in which Japan refuses to settle through the ICJ its other territorial dispute (with China over the Senkaku/Diaoyu Islands), it is questionable whether Japan truly supports the ICJ as a fair method of conflict resolution. At the same time, Japan’s offer to South Korea portrays it as a champion of international law and pragmatic foreign policy, providing it with additional credibility in the international sphere and leverage over South Korea.

At this point in time, an intuitive question tugs at the brain for many: why not just cut the islands in half and use them as the two countries’ maritime boundaries? And for good reason; it seems as though running a pair of scissors through a map of the East Sea/Sea of Japan would resolve much of the tensions between the two nations. Unfortunately, there are multiple issues that make it impossible. First, the islands are reported to house a considerable deposit of natural gas as well as an incredible quantity of fish. Both resources would be a substantial boon for either nation, given their dependency on imported gas and desire for a lucrative seafood industry. In order to fully take advantage of the resources, Dokdo/Takeshima must fall completely under the Exclusive Economic Zone of either South Korea or Japan, which is impossible in a world where the two nations decided to split the rocks in half. Second—and more importantly—brazen nationalism in both nations makes any compromise tantamount to political suicide for the politicians that are in power there. The toxicity of Dokdo/Takeshima represents the tip of an iceberg poisoned by a century of animosity, from the takeover of the Korean Peninsula by Imperial Japan to Japan’s devastating loss in World War II. For South Korea and Japan, allowing each other even an inch is a significant blow to national security and sovereignty; backing out is weakness. This locks Seoul and Tokyo into a vicious cycle where both countries must constantly reiterate their own claims while countering that of the other.

Given that South Korea’s de facto control over the rocks will likely stay permanent and Japan’s international credibility rises with every inevitable South Korean refusal to take the issue to court, it is in neither country’s interests to resolve the dispute and both parties have an incentive to maintain the quagmire that is the status quo.

The overarching reason that Dokdo/Takeshima has been and will remain unsolved is the overwhelming focus on its politics. It is easy to educate oneself on the dispute, poring through countless maps dating back to centuries, even a millennium ago. It is equally easy to parse through the legal language of past treaties and land claims by both countries. Most of all, it is easier still to formulate an opinion in favor of one side or the other. However, that opinion–no matter how well-researched and objectively defended–will inevitably be written off as one engineered by anti-Korean or anti-Japanese bias and rejected on face as little more than a nationalist attack on the integrity of South Korea or Japan. The Dokdo/Takeshima dispute represents a unique issue in which any opinion on the matter is stripped of its individuality and grafted onto a broader agenda. And because nationalism has a structural bias towards intransigence, the ruling political parties in Seoul and Tokyo, the only ones with the capacity to make a difference, have incentives to remain steadfast on the issue in order to garner public support.

However, while the two countries share conservative political viewpoints, they also maintain two of the most liberal economies in Asia. Shifting the focus of approach from politics to economics has proved effective in the past, as proven by Venezuela’s extensive oil trade with the U.S. despite the blatantly oppositional rhetoric that the two states exchange on a regular basis. The relationship between Korea and Japan evidently shares little similarity with that of the U.S. and Venezuela; at the same time, a focus on mutual economic gains over artefactual spats may be the active ingredient in an antidote for the noxious fumes circling the small rocks in the sea. At the very least, it will provide political freedom to provide personal opinions without a nationalist politics to rob those opinions from the individual.

JJ Kim is the Senior Editor of the World Section at Berkeley Political Review. He is a 4th-year studying Political Science and Chinese .