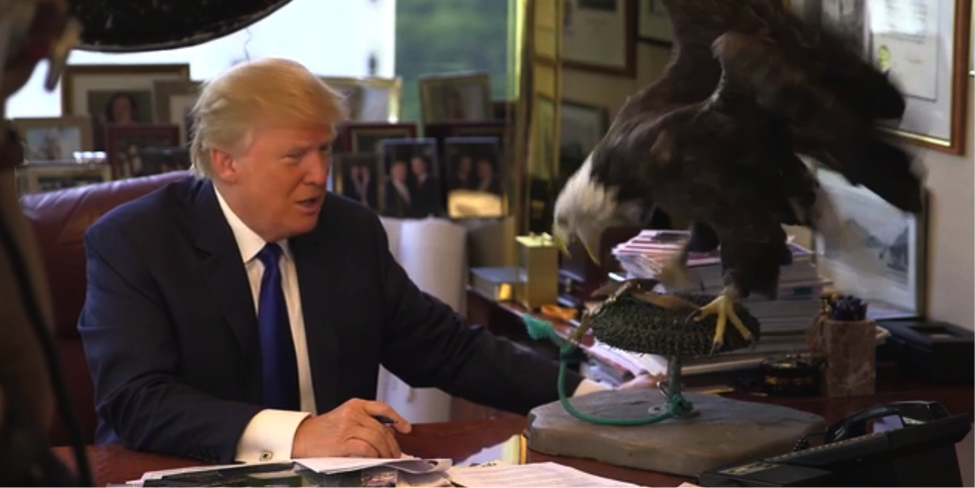 The Gift That Keeps On Giving: Why Trump Fever Is Here to Stay

The man is all over national airwaves, newspapers, and internet memes. He is a presidential candidate, yes. But perhaps more than that, Donald Trump is a social phenomenon: a real-life hashtag, national trend, and constant re-tweet.

Mr. Trump’s popularity has been repeatedly taken apart and examined under the social microscope. The conclusions are as varied as they get: Perhaps he says things that people like to hear. Or he says things people hate to hear, but is valiant enough to say them. Maybe it’s the hair, or the flamboyant hand gestures. Each theory makes the same implication: Trump simply strikes some complex, deeply rooted chord with voters. But what truly makes him ubiquitous may not be his sheer likability. Instead, it is the incessant coverage of a news media that refuses to disengage with him.

The phenomenon began as soon as Trump made his iconic escalator ride into the race for the presidency. The media was immediately saturated with the news of his candidacy. Political Scientists John Sides and Lynn Vavreck put together an analysis of the post-announcement media coverage Mr. Trump and the other Republican presidential candidates have received. The chart summarizing their findings below demonstrates Mr. Trump’s clear advantage in media coverage over the average of all other Republican candidates.

But this is nothing new. When Trump announced that he would be running for the presidency, news outlets were naturally excited — here was an outspoken businessman and media mogul announcing his candidacy to serve as President of the United States of America. His unique background and the recognizable trademark that accompanies his name was perfect media fodder. One would expect to see exactly this kind of, well, Trumped-up coverage. The real question is, why did that media coverage persist?

No one outlet compromises on variety…But Americans hear three times the Trump.

The most obvious argument for why the post-announcement hype never died down points to Mr. Trump himself. Unlike other candidates, Trump has been willing to make hyperbolized, polarized statements while on the campaign trail, repeatedly refusing to apologize for his remarks. From calling for a boycott of Starbucks Coffee to openly questioning the viability of a female opponent for her appearance, Mr. Trump has the uncanny ability to make abrasive statements that he can not only get away with, but wield to generate further media coverage. When a candidate makes remarks directed at a particular person or group of people, he or she also invites a response, fueling a political exchange that makes for irresistible popular media. Trump’s comment about Carly Fiorina’s appearance, for example, led to coverage of Fiorina’s response, which in turn led to coverage of Trump’s response to Fiorina’s response. Once let loose, each statement becomes an unstoppable bit of self-replicating air time, for better or for worse.

Yet there is another potential reason for Trump’s ubiquitous presence, and this one has less to do with voters or Trump than the nature of media coverage itself. News media outlets such as Fox News and CNN compete on the same market. And while they hire different political pundits, run different news programs, and vary in their political leanings, they compete to cover the same news. When Donald Trump interviews on one channel, other channels are inclined to invite him on as well, if only to remain competitive. No one news outlet can afford to lose the bait, so they all bite onto it; soon enough, the American people are hooked. While one highly popular interview may be enough to satisfy the American public’s appetite for Trump, Americans will continue to be exposed to more of the same medicine under different news media brand names, in an endless rotation. Even though each individual news outlet may seek to be varied in its coverage, if each outlet insists on airing one Trump interview, the aggregate coverage Mr. Trump receives becomes disproportionate. In an oversimplified model, if CNN covers Donald Trump and Ben Carson, Fox covers Trump and Marco Rubio, and ABC covers Trump and Carly Fiorina, no one outlet compromises on variety—each is covering two candidates. But Americans hear three times the Trump.

Of course, there are exceptions to this phenomenon. Earlier this month, MSNBC host Joe Scarborough refused to engage further with Trump. After repeatedly warning Mr. Trump that he “…can’t just talk…we will go to break if you keep talking,” Scarborough halted the candidate mid-sentence to cut to commercial break. The move was a daring one for a morning news talk show, but it highlights what may be the Achilles’s Heel of  Trump’s media coverage: his attitude towards reporters. While media outlets are eager to cover his antics and engage with his outlandish ideas, reporters like Scarborough are unwilling to do so if it means facing a potential reversal of the interview power dynamic. Mr. Trump’s dismissal and removal of a Univision reporter, coupled with his more recent alleged mockery of a disabled reporter, have not gone unnoticed. Of course, the media is still willing to cover these incidents. But if Trump crosses the line one too many times, one may begin to see a journalistic pushback, either in the form of more hostile coverage or Scarborough-like refusals to engage. Such a rare phenomenon is rarely seen, and time will tell whether there is room for Trump’s relationship with the media to take a sour turn.

Of course, this very piece perpetuates the cycle that strengthens Trump’s candidacy by bringing him to the forefront of nearly every political conversation of the election cycle. And that is what makes the phenomenon so perplexing. The more media coverage Trump gets, the more inclined media outlets are to cover him. He is the holiday gift that keeps on giving. And as long as he doesn’t cross the line one too many times, changing the channel may not be an option.