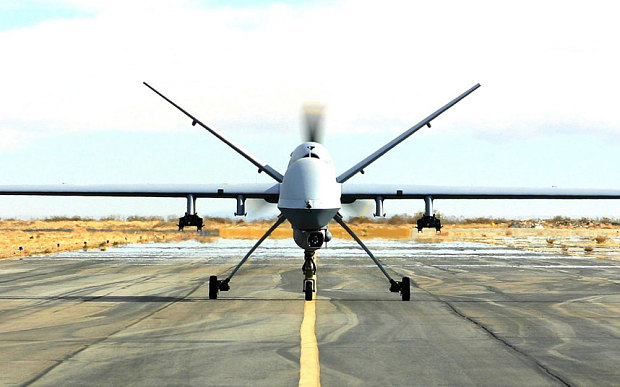 In 2000, an unarmed, unmanned CIA surveillance aircraft overflew Tarnak Farm in Afghanistan, taking video of the sprawling agricultural complex and a tall man dressed in a white robe. The figure in the tape, which was leaked in 2004, was believed to be Osama bin Laden.  Tarnak Farm was not attacked in part because it would’ve taken hours for a cruise missile to arrive.

In the late 1990s, the US military began to rely increasingly on unarmed, unmanned surveillance aircraft, mainly the MQ-1 Predator Drone, to undertake surveillance operations in the Middle East. The Tarnak Farm incident in 2000 helped speed the already-underway weaponization of the Predator drone to launch Hellfire missiles. Newly armed, these drones, particularly the MQ-1 Predator and later the MQ-9 Reaper, quickly became an important weapon of war in Afghanistan and Iraq. But it has been under the Obama administration that drones have become the weapon of choice in the War on Terror.

Since the first CIA drone strike in 2002, drones have enabled operations that would have been difficult with manned aircraft. Their long endurance means that drones can spy on a target for far longer than a manned bomber, which means a greater chance of identifying a target and finding a situation where he or she can be taken out with minimal collateral damage. The lack of a pilot also means that there is no risk to American personnel, and thus that drone strikes are easier to stomach politically.

A turf war between the CIA and Joint Special Operations Command (each of which operates its own, parallel drone program), coupled with the relative political expediency of using drones, has led the Obama administration to continually expand drone strikes. But the ease of conducting such operations has become one of the technology’s greatest downfalls. The expediency of using a drone to take out a target has helped make the “capture ” part of “capture/kill” missions a rare occurrence.

This is a problem because captures are critical the counterterrorism operations. CIA Director John Brennan, back when he was Homeland Security advisor, admitted, “whenever it is possible to capture a suspected terrorist, it is the unqualified preference of the administration to take custody of that individual so we can obtain information that is vital to the safety and security of the American people.”  The numbers, unfortunately, do not bear out Brennan’s statement: documents leaked to The Intercept reveal that capture missions made up only 25% of missions undertaken in the Horn of Africa – and all captures were by foreign forces. This is a problem, according to Lt. Gen. Flynn, the former chief of intelligence for JSOC, who argues, “You cannot conduct counterinsurgency, counterterrorism, or counter-guerrilla operations without having effective interrogation operations…Without the ability to capture or interrogate, your effectiveness when conducting counterterrorism operations can be cut in half, if not even lower than that, and that’s the challenge that we face.” An internal Pentagon study obtained by The Intercept seems to agree, arguing that capture operations should be expanded. Further, a lack of captures appears to contribute to one of the drone program’s biggest operational challenges – a lack of intelligence.

Drone strikes often forced rely on questionable intelligence.  One of the most popular tools for tracking would-be terrorists is by tracking phones or using other SIGINT (signals intelligence) methods.  According to the Intelligence, Surveillance, and Reconnaissance Task Force, a Pentagon organization, the SIGINT capabilities in many drone operations areas are “poor” and “limited” and often comes from foreign partners rather than the US’s own sources.  A confidential Intercept source notes that, “There’s countless instances where I’ve come across intelligence that was faulty…It’s stunning the number of instances when selectors [electronically identifying markers such as phone numbers or emails] are misattributed to certain people. And it isn’t until several months or years later that you all of a sudden realize that the entire time you thought you were going after this really hot target, you wind up realizing it was his mother’s phone the whole time.”  Nonetheless, more than half the intelligence used to track targets in Somalia and Yemen came from such sources.  The over-reliance on SIGINT could be mitigated by improving human intelligence (HUMINT) sources, who have direct knowledge of events on the ground.  But that can only happen if the U.S. is willing to undertake more capture operations.

While the administration argues that drone strikes are only used in situations where capture is not feasible, this standard has increasingly come under fire.  Jennifer Daskal, of American University and formerly of the DoJ, questions, “What does it mean for capture not to be feasible? How hard do you have to try?” The capture of Mohanad Mahmoud Al Farekh, a Texas-born man accused of being an Al Qaeda operative who was nearly targeted two years earlier in a drone strike, belies the administration’s stance that capture missions are simply not feasible.  The fallout from the 2011 strike on American citizen and radical cleric Anwar al-Awlaki led the administration to hesitate issuing a kill order on another American citizen, but evidently capture was still possible.  Further, the 2011 raid on the compound of Osama bin Laden in Pakistan seems to indicate that capture operations are at least in some cases still very much a possibility if the target appears to be worth the extra effort and risk.  America was willing to violate Pakistani sovereignty to secretly deploy ground forces when the target was bin Laden, and the gamble paid off.  In the case of Mr. Farekh, the administration was willing to delay a kill operation to potentially capture the target later. Taking a calculated risk and engaging in more of such operations would improve the ability of American intelligence to identify and track important targets.

However, intelligence gathering is not the only reason to reign in the drone program.  Unfortunately, those on the “kill list” are not the only ones killed in drone strikes.  According to documents obtained by The Intercept, being placed on the kill list is a fairly involved process that goes all the way up to President Obama himself.  But collateral damage is a common occurrence.  The military marks anyone killed in a drone strike as “enemy killed in action (EKIA)” even if they were not specifically targeted, unless there is some exonerating evidence.  The exact number of deaths is unknown but an average of estimates finds that 522 strikes have led to 3852 deaths, 476 of which were civilians.  However, it is unclear how many of these enemy combatants match the Obama administration’s characterization of drone strikes as reserved for mainly high-level targets posing a “continuing, imminent threat to U.S. persons.”  The Intercept documents paint a particularly grim picture. There were 16 people in Yemen that President Obama authorized JSOC to kill, but the Bureau of Investigative Journalism counted more than 200 deaths.  Improving intelligence sources could help eliminate some of these casualties.  One recent strike accidentally killed two western hostages.  The Guardian notes that the killing of a single target can sometimes involve multiple missed strikes, and that these misses often result in civilian casualties.  Requiring a higher level of certainty before initiating a strike would help reduce civilian casualties.

Further, in addition to hunting targets on the kill list, the US is known to undertake “signature strikes”, operations which target military-age individuals exhibiting suspicious behavior but whom drone operators have no specific intelligence about.  Such strikes appear to be particularly high risk: earlier this year, a captured American aid worker was accidentally killed in a signature strike.  The Guardian argues that, “Civilian deaths in signature strikes, accordingly, are not accidental. They are, as [Congressman Adam] Schiff framed it, more like a cost of doing business – only the real cost is shielded from the public.”

A reduction in capture missions and poor intelligence have both contributed to civilian deaths from drones.  While the Obama administration may be able to make a case for the individuals it specifically targets, the statistics on civilian casualties, at best, prove that the administration has yet to work out all the kinks.  The signature strikes, in which a target is killed simply for suspicious movements, are particularly legally questionable and internationally damaging.  Such liberal use of drones risks setting a dangerous precedent as the technology continues to proliferate to other countries.  Anything less than an intensive targeting procedure risks giving dictators and autocratic regimes more legitimacy in using such technology indiscriminately or for political advantage.

Drone strikes are often more precise than other methods (e.g. cruise missiles), resulting in fewer civilian casualties.  But the new technology has also led the US to conduct strikes that it wouldn’t have in the past, making any net reduction in civilian deaths murky at best.  Perhaps the greatest criticism of drones that can be leveled from a policy perspective is that the evidence for their effectiveness is equivocal at best.  A U.S. Army War College study concludes that, “One reasonably consistent finding…is that drone strikes have little influence, positive or negative, on the amount of insurgent violence that occurs in Afghanistan. A more tentative conclusion…is that drone strikes that result in civilian deaths appear to have little relationship with subsequent insurgent violence.  Another conclusion is that drone strikes that kill militants in Pakistan are associated with increases in subsequent insurgent violence in the country.”

None of this is to say that drones are not useful.  Indeed, drones have enabled operations that would have been difficult to conduct in the past.  Their ability to provide persistent surveillance and to stealthily and accurately strike targets has made them one of the most important weapons in the War on Terror.  However, while drones will continue to play a role in U.S. military strategy, the Obama administration tighter control and narrower mission parameters are necessary.  With the effectiveness of drones as a counterinsurgency tool questionable at best, the administration will be challenged if it claims that the current levels of civilian casualties are a necessary evil.  Poor intelligence and frequent civilian casualties argue for a more restricted view of when a drone strike is permissible.  A rebalancing toward traditional tactics, with a greater focus on capture, may actually be net beneficial to US intelligence.  More capture missions, while riskier, would help reduce the reliance on often-unreliable signals intelligence and hopefully reduce civilian casualties.  Broadly, the US still has the opportunity to define the norms which will govern drones, but not for much longer.  With at least eight other nations – China, Pakistan, Israel, Iran, Britain, Nigeria, France, and South Africa – already in possession of drones, the the administration is running out of time to define standard drone strategy.  Failure to do so risks establishing loose rules governing the use of drones.  If drones are to fight terror, rather than be a part of it, careful rules will need to be established to make drones a highly regulated and targeted weapon.