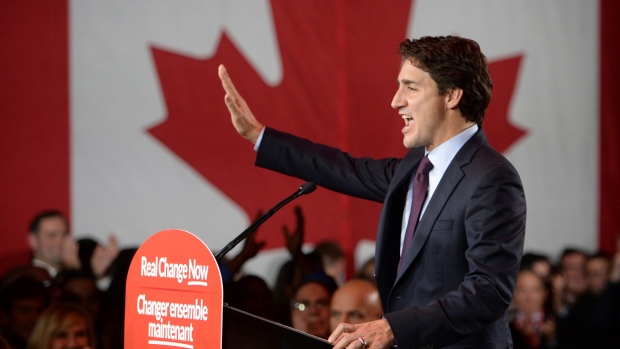 On October 19, 2015, Canada voted and handed their government’s leadership, previously under the Conservative Party for almost a decade, to the Liberal Party and its charismatic leader. But can this hyped-up heir with floppy hair deliver on his campaign promise of “real change”?” Let’s take a look at the facts.

Trudeau, son of wildly influential former Canadian Prime Minister Pierre Trudeau, ran on a fairly liberal platform and won with how well it contrasted with Harper and its policies. During his campaign, Trudeau promised to increase taxes for those making over $200,000 and lower them for the middle class, vowed to see marijuana legalized, and told his party’s caucus that they were expected to fully support pro-choice policies and abortion rights (which have no legal restrictions in Canada). He also planned to double national spending on infrastructure and create a modest deficit to boost the economy. While Harper looked like a xenophobic bully when his government banned wearing the niqab at citizenship ceremonies when very few women were doing so anyway, Trudeau declared that wearing the veil was a “fundamental right” for Canadians. As Harper made a series of gaffes adding to his reputation as discriminatory, Trudeau impressed minorities by famously declaring that “A Canadian is a Canadian is a Canadian.” Trudeau continued to appeal to leftists and other Canadians tired of Harper’s policies when he pledged to take in 25,000 more Syrian refugees by the end of the year and most recently when he told President Obama that Canada will withdraw of the U.S.-led bombing mission against ISIL but maintain humanitarian aid and training.

The problem, of course, is how Trudeau plans to accomplish these lofty goals. The Liberal Party has announced that the first bill they plan to introduce in parliament will help cut taxes for the middle class while raising them for wealthier Canadians and their budget bill will include increased childcare benefits for poor Canadian families. However, there is no word yet on how Trudeau will fulfill his other promises, which include, among others, the legalization of marijuana and a reformed senate.

Despite his somewhat vague platform, Trudeau still appears to be the sunny dawn to the nightmare that Harper was for many Canadians. After all, they didn’t overwhelmingly vote in the Liberals because of “Trudeaumania” but rather because of “Harper-phobia”. Keep in mind that the Liberal and Conservative parties are the most popular in Canada, with all Prime Ministers from one of these two parties (or the Conservative party’s various historical predecessors) and the New Democratic Party lagging behind them in terms of both visibility and popularity. However, despite his shiny social liberalism, Trudeau and the Liberal Party’s centrism is not to be forgotten—especially when his and Harper’s views seem to match on a number of issues. As much as Trudeau has appealed to his liberal base, he has also alienated them, especially with his stances on Bill C-51 and the Keystone XL Pipeline, both burning issues in Canadian politics right now. Bill C-51 is national security legislation which expands police and Canadian Security Intelligence Services powers. It has been criticized by Amnesty International and author Margaret Atwood, among others, for potential privacy and civil liberties violations. Trudeau supports the bill (which was instituted as law as of June under Harper’s government) as a counter-terrorism tool. The Keystone XL Pipeline, a transnational pipeline to funnel oil from Canada to the U.S., has been criticized by American and Canadian liberals alike, but is supported by Trudeau, who has gone as far to say that it is “not scientific” to oppose the pipeline. Critics raise concerns over environmental impact regarding emissions and depletion of fossil fuels, Canadian economic dependency on oil exports, and disregard for the rights of First Nations people, who Trudeau previously swore to consult and include more in official policy. Although he is certainly a relief compared to Harper, who rolled back both environmental protections and the right of government scientists to speak publicly about their work, Trudeau’s “not scientific” claim and apparent inability to clarify or support such claims are only serving to support the Conservative image of him from the campaign as inexperienced and unintelligent.

The truth of the matter is that most Canadians recognize that the Liberals are the centrist party and that Trudeau is only reflective of that. It is the layman American and foreigner who needs convincing of this. Trudeau, although easy to label as convincingly leftist based on his social platform, is not the liberal savior to Harper’s conservative traitor, but he is the man whom the Canadian people picked to fix his predecessor’s messes. We can only hope that in carrying on the torch, he follows the Canadian people and not in Harper’s footsteps.