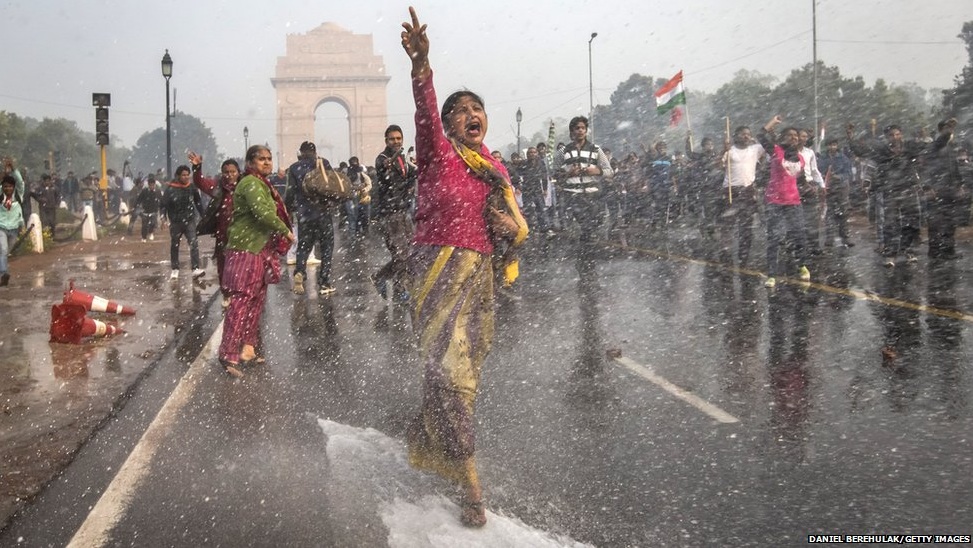 In the past few years, India has been making international headlines not so much for its new Prime Minister or his new environmental and space programs, but for something a lot less bureaucratic — and a lot more threatening to its status as a developing nation to root for.

The 2012 Delhi rape case, also known as the Nirbhaya Case, in which a young woman returning home late at night with a male companion was brutally gang-raped and left for dead, launched waves of protests across India and brought international attention to the nation. Defense attorneys for the case remarked that women should not be out late without family and with strange men in the first place, and so the victim and her male companion themselves were to blame. The documentary film about the case and the pervading culture of misogyny in the country, India’s Daughter, was then banned in India for containing supposedly offensive and provocative material; however, the ban was considered by many to be a case of the Indian government trying to protect national pride at the expense of sexual assault awareness. In August of this year, Amnesty International launched a petition protesting the punishment given by a khap panchayat, an unelected council of village elders, to two girls to be raped and paraded naked , which has now garnered more than 500,000 signatures and brought India’s perceived threat to women’s rights, dubbed India’s “rape problem”, into the spotlight once again.

This focus on India’s so-called “rape problem” has been important in forcing India to examine and reform itself in terms of women’s rights, but it has failed in terms of how it has impacted the Western perspective. While India’s sexual assault incidents and culturally sexist undertones cannot be dismissed or underestimated, they have been used to allow the West to retain a tone of cultural superiority when analyzing so-called “third-world” countries like India. This is not only another way for the West to cling to some hierarchy in which it plays the model for supposedly developing nations, it is also blatantly inaccurate and does a disservice to the very Indian people affected by sexism and other oppression at play. Grassroots Indian movements — especially those with women at the helm — have done an impressive job at shedding light on and combatting the gendered violence they face. This is in contrast to some Western nations, which ignore or undermine their own sexual assault problems, which is enhanced by their belief that at least they are not as bad as ‘backward’ nations like India.

There has been plenty of Western condemnation of India’s sexual assault cases, especially after the 2012 Nirbhaya case. While this could certainly be used as an incentive for the Indian government to crack down harder on gender violence and specifically sexual assault related crimes, Western censure inadvertently allowed Westerners to consider themselves superior, and, most importantly, ignore the Indian domestic movements against gendered violence as well as Western victims. This sense of superiority stems from the perception that India has a particularly rampant rape problem that is somehow connected to the culture of the nation. After the Nirbhaya case, multiple countries, including the U.K., put out travel advisories warning their female citizens to be careful when visiting India, with China’s state-run newspaper, Xinhua, even labeling Delhi the “rape capital of the world”.

These seemingly innocent concerns took a discriminatory and controversial tone when Professor Beck-Sickinger of Leipzig University in Germany rejected a male Indian student for an internship, claiming that she didn’t accept any male Indian students because of the “rape problem in India”, adding that “it is unbelievable that Indian society is not able to solve this problem for many years now” and that this practice was common among other female German professors. This case of clear discrimination was unsettling partly because it was based on the sensationalization by global media of the women’s rights violations in India but even more so because it was not an isolated incident. What is especially interesting is that India’s problem with sexual assault is by no means exceptional. In fact, Western countries like Germany have higher rates of rape. As of 2010, an average of 1.8 out of 100,000 women in India reported being raped. In Germany, an average of 9.4 per 100,000 women reported being raped. In the United States, this number was 27.3. The average of all the nations in the E.U. in 2009 was 10.19. It seems odd that it’s India where women need to be more cautious when confronted with these statistics, right? The fact is, sensational media does not always use these statistics and as Professor Beck-Sickinger said when trying to justify her bigotry and revealing its source, “We hear a lot about the rape problem in India.” She’s right — we do hear a lot about the rape problem in India, but this is not necessarily a bad thing.

India and its government should be — and have been — forced to acknowledge their problems. Criticizing international media and Western perception for hypocritically overemphasizing India’s problems with sexual assault does not mean there is not sexual assault or sexism problem in India. The brutal rape and murder in the 2012 Nirbhaya case were encouraged by the idea that women are not meant to be independent, act in a way similar to that of men, be out with strange men, or resist their “punishments.” This idea is clear in the recent case that Amnesty International shed light upon as well, in which two young women, treated as nothing more than instruments of their family and sexual objects to be manipulated, were sentenced to gang rape because their brother eloped with a higher-caste woman. More revealing is that this view is shared by people like Manohar Lal Sharma, defense lawyer in the Nirbhaya case, who claimed that the victims were to blame for the incident and further stated that “until today I have not seen a single incident or example of rape with a respected lady. Even an underworld don would not like to touch a girl with respect,” effectively communicating that only non-respectable women can be raped and therefore those who are raped somehow deserve it for not being respectable. Even more alarming is Indian Union Culture Minister Mahesh Sharma’s remark that girls wanting a night out is not part of Indian culture, showing that even in relatively mainstream parts of Indian society, women are not necessarily seen as equal to men. It’s rare to see public figures making such openly sexist remarks in the West, which contributes to the idea that there is a sexist element to modern Indian society.

However, what is left out of many stories about India’s rape problem is how India has reacted — with massive outrage and protests nationwide along with governmental responses, showing that brutal rapes and sexist comments are not an acceptable norm in India. Although India is obviously not free of sexism or sexual assault, it is important to note that the same nation has produced mass movements, by its grassroots and its media, that are ignored as the nation as a whole is criticized.

The perception that India simply has a “rape problem” also dismisses other very real intersectional complexities in India. India may have a “rape problem”, but that is intertwined with its “censorship problem” and its “caste problem”. India’s ban on India’s Daughter, Leslie Udwin’s documentary on the Nirbhaya case, is representative of larger concerns about censorship in favor of misplaced national pride and nationalism in the largest democracy in the world. Furthermore, the Amnesty International case is clearly also about casteism; the infraction being punished was an inter-caste marriage involving the victims’ brother and the khap panchayat itself is composed of usually male, upper-caste village elders, whose word is considered law. Conversation about measures India should be taking to curb similar violence should include this casteism aspect, which is indeed unique to India, unlike rape or sexism. For example, India, which has already declared kangaroo courts illegal and supported the victims of this case, should be urged to enforce the illegality of khap panchayats and similar kangaroo courts. This kind of attention and pressure may be extremely effective; the Indian response to the Nirbhaya case, including mass protests on part of average citizens and fast-track courts and criminal law amendments established by the government, while not perfect, has shown how open to debate and conversation the government can be, when under pressure by its 1.3 billion citizens.

Ultimately, it is not wrong to point out India’s problems with rape and sexual assault so long as this does not blind us to other issues at play either in India or to sexual assault in the West.