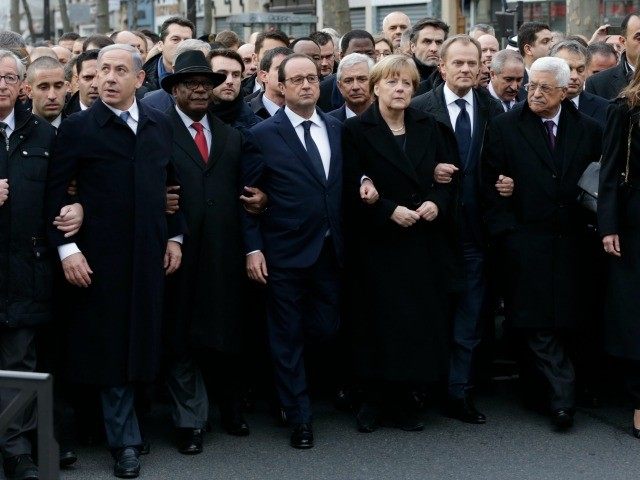 World leaders gather at the unity rally in Paris, France on January 11th to show solidarity for survivors of the Charlie Hebdo attacks.

On January 9th, African militant group Boko Haram carried out a violent attack in the northeastern Nigerian town of Baga, killing an estimated 2,000 people and causing the mass flight of thousands more. Entire villages were burned to the ground, and survivors were forced to bury the dead. Boko Haram, a group opposed to western education, has been plaguing the region for nearly 10 years, and has taken over control of several eastern African cities. A group often labeled as the “ISIS of Africa,” its recent terror spree served as a major reminder of the threat the group poses not just to Nigeria, but the larger eastern African region, including nations like Cameroon and Chad.

After the unfolding of both of these events, international leaders and dignitaries arrived in Paris, France on January 11th for what was widely noted as a “unity rally,” leading a symbolic march in solidarity with France and those impacted by the Charlie Hebdo attacks. Media coverage almost exclusively focused on the Charlie Hebdo tragedy, and social media exploded with the hash tag “Je Suis Charlie,” or “I am Charlie” to display solidarity with the French people. In the midst of this global uproar against terrorism, Nigeria and the atrocities committed there were left unmentioned, and Nigerian president Goodluck Jonathan denounced the Charlie Hebdo attacks well before even addressing the massacre that had just occurred in his own country. Yet this is not the first example of terrorism in the West receiving more media and political attention than that in the East. Just one day before the unity rally, a market in northern Nigeria was attacked by a female suicide bomber estimated to be around ten years old. More than twenty were killed in the bombing, and many more were left severely injured. Only a month earlier, in December 2014, the Taliban attacked a school in Peshawar, Pakistan, massacring 132 unarmed schoolchildren. Each of these tragedies has been just as devastating a threat to basic human rights as the attacks in France. Yet each received a fleeting amount of media attention.

With the rise of terrorism across the globe, militant Islamic groups like ISIS, Boko Haram, and Al Qaeda are beginning to conduct attacks and commit atrocities one after the other, often at the same time. Understanding the global threat that terrorism poses requires paying attention to and addressing each of these attacks — and yet media coverage and political attention has historically focused on those in the West, despite the disproportionately lower death toll they bring. This skewed coverage is concerning not only because it seems to imply a disregard for non-Western lives, but also because it incentivizes world leaders to address only those issues which attract widespread public — and by extension, western — outcry. The face of terrorism, however, has changed, and it no longer only targets the West. Groups such as ISIS and Boko Haram are targeting multiple cities and even entire states across Africa and the Middle East; turning a blind eye to these developments poses significant danger the Western world. The same terrorist groups that are allowed to come to power in the global south then use their platform to threaten the West and the rest of the world. Acknowledging their global presence and the true magnitude of their atrocities not only serves justice to victims, but also unites the world against terrorism as a global threat, not one divided by region and culture. Paris, Baga, and Peshawar may be separated by culture, geography, and language, but they are also united by a common enemy — and bringing them together may just be the first step towards fighting global terrorism.[/vc_column_text][/vc_column][/vc_row]