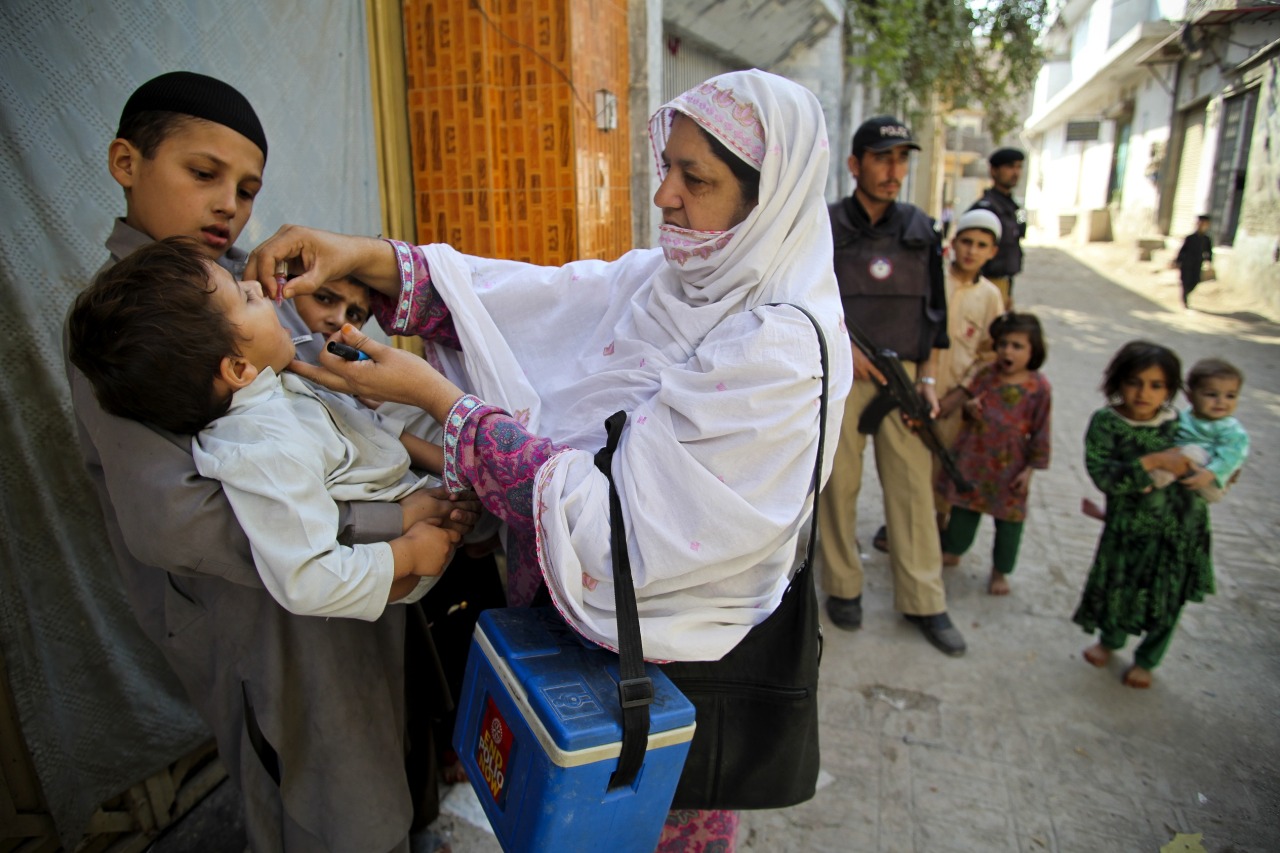 With the world focusing on the Ebola outbreak ravaging through West Africa, it is easy to overlook an equally dangerous disease lurking behind global headlines: polio. Polio, a highly infectious disease that can cause irreversible paralysis in children, is entirely preventable if young children are frequently given vaccines. Hundreds of thousands of children in the USA and Europe were paralyzed by the poliovirus throughout the 1940s and 50s, yet the development of effective vaccines in the 60s drastically reduced the spread of polio in the industrialized world. However, polio has never been eradicated globally and has begun reemerging with a vengeance. In a twist of fate, it appears that the steps leading up to one of President Obama’s greatest foreign policy achievements may be to blame.

Polio is primarily spread through contact with the feces of infected individual or air droplets from a cough, and thus the poor sanitary conditions found in many developing nations help facilitate the transmission of polio. In May 1988, 166 member states of the World Health Assembly launched a global mission to eradicate polio by the end of the year 2000 using vaccines, and with the cooperation and support of the international community, the global incidence of polio decreased by 99%. By early 2011, polio was only endemic in Afghanistan, Nigeria, and Pakistan. Polio was never successfully eradicated in Pakistan due to widespread rumors claiming that the polio vaccine was a Western plot to sterilize young Muslim children and contained impure ingredients from pigs. Nevertheless, Pakistani public health workers made significant headway in the early 2000’s to limit the incidence of new polio cases.

On the night of May 2nd, 2011, however, a team of 79 elite US Navy SEALs slipped into Pakistani airspace from Afghanistan on-board stealth helicopters, with the mission of killing the infamous founder of Al Qaeda and 9/11 mastermind, Osama bin Laden. Wanted in connection to various U.S. embassy bombings in the 1990’s and the 9/11 terrorist attacks, bin Laden topped President Obama’s and the FBI’s list of wanted fugitives. Within a few hours, Osama bin Laden and some of his closest relatives were dead at the hands of the SEALs in the city of Abbottabad, near Pakistan’s capital of Islamabad.

How did U.S. armed forces know that Osama bin Laden was hiding in Abbottabad? In August 2010, CIA analysts believed that they had identified bin Laden’s courier, Abu Ahmed al-Kuwaiti, frequenting a three-story compound in Abbottabad. Using spy satellite surveillance, these analysts determined that a particular man always stayed within the compound walls. To prove that bin Laden was hiding in the compound, the CIA hired the surgeon general of Pakistan’s northwestern Khyber Pakhtunkhwa province, Dr. Shakil Afridi. Dr. Afridi was instructed to carry out a fake hepatitis B vaccination drive in order to compare DNA samples from children seen living in the Abbottabad compound with a sample from bin Laden’s deceased sister. The CIA’s plan relied on the fact that governmental health workers had given polio drops to these children in the past. An unsuspecting nurse managed to enter the compound to “vaccinate” the children, yet for unknown reasons, the CIA failed to extract any DNA samples and could not definitely prove that the children were related to bin Laden. Nonetheless, the CIA utilized further surveillance information and correctly presumed they had finally found their target.

Although the end goal of eliminating bin Laden was accomplished by the raid – to the joy of President Obama and the American public – one unexpected consequence of the failed, fake vaccination drive has been the dramatic rise of new polio cases in Pakistan. The progress Pakistani health workers had made limiting the spread of polio halted completely when the Pakistani public learned that the CIA had carried out a fake vaccination program as first reported by The Guardian. The initial mistrust that some Pakistanis had in vaccinations skyrocketed as their worst fears about vaccines being elaborate, foreign schemes were fully realized. A limited number of parents across the country have refused to let health workers administer polio vaccines to their children out of mistrust, and frequently hide their children whenever polio workers come around. Additionally, Taliban and Al Qaeda leaders forcibly controlling Pakistan’s semi-autonomous tribal regions bordering Afghanistan issued bans on polio vaccinations for children, threatening and killing more than 60 Pakistani and foreign polio workers since 2012.

Consequently, the number of new polio cases has shot up dramatically in Pakistan, with 217 new polio cases recorded so far in 2014, breaking a 14-year record. 217 cases of polio may not seem threatening in comparison to the 10,000 individuals that have been infected with Ebola, yet if even one child remains infected with the polio virus, children around the world remain at risk of contracting the disease. According to the World Health Organization, “Failure to eradicate polio from these last remaining strongholds could result in as many as 200,000 new cases every year, within 10 years, all over the world.” With Pakistan now accounting for 85% of world polio cases and strains of Pakistani polioviruses being traced to infected children in China, Syria, Iraq, Egypt, and Israel, the fight against polio in Pakistan has become a serious global health emergency.

Given the risk that Pakistan’s polio crisis poses to the world, it is natural to question if the CIA-led fake vaccination drive held in 2011 was justifiable. Although it is impossible to know if the incidence of polio would have decreased in Pakistan if the fake drive were not carried out, the U.S.’s approach to killing bin Laden is reflective of American foreign policy’s emphasis on the ends justifying the means. The White House has only revealed this year that the CIA has now established a policy against the use of fake vaccination drives to target terrorists, but did not apologize for utilizing a humanitarian relief program as cover for a raid. In response to CIA policy, InterAction, an alliance of over 200 U.S. NGO’s, has complained to the director of the CIA that the fake vaccination drive has shattered humanitarian agencies’ efforts to maintain their independence from the U.S. government as they carry out legitimate polio vaccination drives. Coupled with the unilateral raid to kill bin Laden conducted in violation of Pakistani sovereignty, almost any American involvement in Pakistan is now viewed with fear and anger by large swathes of the Pakistani populace. In a single swoop, the CIA killed bin Laden, ending a decade-long international manhunt, but simultaneously destroyed the trust in vaccines that health care workers had spent years to build.

Given the massive uptick in new polio cases in Pakistan, the United States has a moral responsibility to take concrete actions to limit the spread of polio across the world. The U.S. government has taken an important first step in establishing a policy preventing future fake CIA vaccination programs. However, it still has to tackle the mentality of eliminating high-value targets without regards to the means utilized that allowed the fake vaccination drive to occur in the first place. As the bin Laden raid demonstrates, the means the United States uses to achieve its foreign policy goals often results in long-term consequences that can be even more severe than the original problem itself. The U.S. government can resolve this dilemma by realistically considering how individuals in affected nations will perceive U.S. actions as well as any potential backlashes.

In order to compensate for the damage the fake CIA vaccination drive has caused on the global effort against polio, the United States must first convince the Pakistani public that it can be trusted. The U.S. can accomplish this by providing monetary support to development and relief agencies in Pakistan that aim to improve sanitary facilities and infrastructure in rural areas plagued by polio, and by committing to avoid unilateral raids in violation of Pakistani sovereignty. After such constructive policies, the U.S. can expand its monetary aid to international NGOs carrying out legitimate polio vaccination drives, and in the process help shift the tide against this deadly but entirely preventable disease.