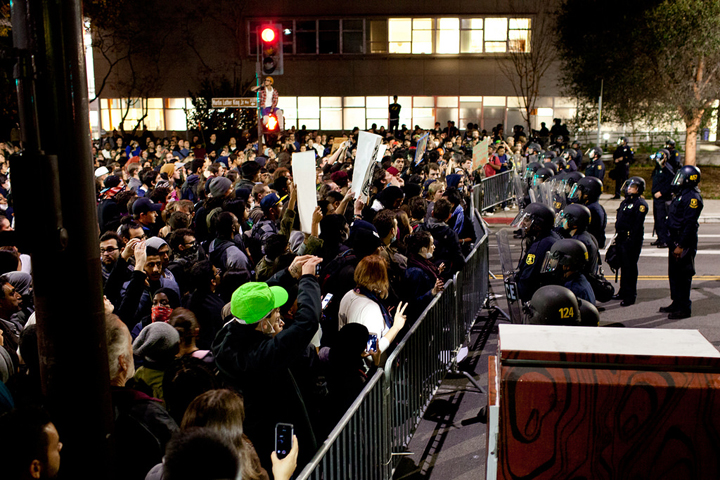 A Freshman’s Perspective on the Recent Police Brutality Protest

I grew up in Redmond, Washington, a suburb of Seattle. “Home” to me meant verdant parks. Quiet streets. Quieter nights. The calm darkness of those nights was unbroken except for the occasional passing taillight of our city cops’ fancy Dodge Chargers. When I was three or four, my parents told me what to do in case of an emergency. Call 9-1-1, they said—so the police can come. I never felt scared of the police. They were the “good guys.” In Redmond, they subsidized helmets for bike riders. Rode motorcycles in the annual Derby Days parade. Handed out stickers to little kids.

My presence at the police brutality protest on Saturday night was accidental. I went to watch Interstellar with my friend Arjun when we noticed helicopters circling overhead and van after van filled with police officers heading down the street. We dismissed it as maybe a senator or representative or some other important political figure was coming through. But when we got out of the movie and headed back to the dorms, we first saw the protesters, and then the police.

Looking at the police marching down the street, swathed in riot gear, I was uncomfortably reminded of the peacekeepers in the Hunger Games movies. The show of force was overwhelming and extremely threatening. Police blocked off different parts of the street, effectively preventing Arjun and me from getting home. As we started walking toward a side street, I heard loud bangs in the distance that sounded like fireworks going off. The smell of acrid smoke filled the air.

I felt burning in my throat. It was the first time I ever encountered tear gas. Thankfully I was on a side street and didn’t find myself enveloped by the first wave, but I still remember the stinging feeling, as if a vaporous being with limbs had decided to crawl into my gullet and start writhing, claws out.

The police started shouting “Move South on Telegraph!” and pushing as they walked forward. An already tightly-packed crowd grew even closer but the faster we moved, the more impatient the line of police behind us seemed to get.

The force of the police, shoving people forward, sent someone sprawling toward me. As I tried to walk forward, someone stepped on my shoe—a pink flip-flop—and as I tripped forward, it came off my foot, quickly lost to the crowd. I was unsure what to do. I’d seen the condition of the pavement that lay ahead—trash strewn widely and broken glass that didn’t bode well for my one bare foot.

Arjun dove back into the crowd as I looked on worriedly and the police continued pushing us the crush forward. He reemerged, one pink flip-flop victoriously in hand, I breathed a sigh of relief and barely had the time to bend down and put it on before I felt the next wave of shoving. A heavyset man behind me leaned back toward the police instead of walking forward. They pushed him forward violently. A young woman turned to face the police and said angrily, “We’re going as fast as we can!” They continued to shout, “Faster, faster.”

It was dangerously confined.

I’ve never liked large crowds. Not in Times Square, eyes scanning the throngs around me for friends or family members gone AWOL, not in malls on the weekends, not even on Sproul on my way to class. But at least in those crowds, there was distance between me and the person next to me. Here, I felt like the police were trying to make us trample each other.

When the bottleneck finally opened up, we all poured down Telegraph toward Amoeba Music, and I breathed an audible sigh of relief. Arjun and I darted out of the main crowd and onto a side street, where we watched as the line of police once again advanced toward the protestors. Over a megaphone one of the police officers said that by the authority invested in him by the State of California, he was declaring this an “unlawful assembly.” He repeated it a couple more times; the sounds of choppers overhead and protestors chanting in response drowned him out somewhat.

I was looking the other way when I heard a loud commotion from Telegraph and turned back around. I saw at least six or seven police officers rush toward the crowd as if football players darting in for a tackle. Screaming, most protestors ran further south on Telegraph. The police officers took two individuals to the ground, one of them a man in a green t-shirt. I saw the guy in green get his hands zip-tied behind him.

He was lying restrained on the ground, unmoving, for only a few seconds before an officer punched him repeatedly and viciously in the back.

There was a collective gasp before chants of “Shame on you! Shame on you!” emerged. I joined in, shocked and enraged. I never dreamed I would see someone getting punched when he was down on the streets of Berkeley. I never thought it could be at the hands of a police officer.

When the police officers donned their masks and prepared to throw canisters of tear gas, I slowly backed away. I was wearing contacts, and I’d heard what tear gas did to contacts: melted them to your eyes. That was one thing I hadn’t signed up for. I saw the tear gas spread like a fast-moving cloud. More screaming from the protestors, more running, in several directions.

As I saw the police officers, who’d come in from all over the Bay Area—Vallejo, Hayward, the Alameda County Sheriff’s office, even Pleasanton—load up for leaving, some of them standing on the backs of Humvees in all black with their rubber-bullet guns slung around their shoulders, I realized that these individuals with all their paramilitary accouterments scared me more than they made me feel safe. That was when it hit me: the acute, temporary fear I’d felt because of some tear gas, batons, flashbangs, and rubber bullets was a reminder of my privilege.

In the past few days, the protests have transformed in various ways. Various groups have tried to co-opt or sabotage the movement, changing the dialogue to focus on issues ranging from police brutality against students to anti-capitalism. The Berkeley protests have become a multifaceted, polarizing, and complicated issue. However, first and foremost my terrifying experience on Saturday was a reminder about the privileges accorded to me due to the color of my skin. Although I was afraid, eventually I could walk away from the trash burning on the streets and broken windows. I could walk away from the police who were shoving my friends and beating up innocents. I could leave.

Oscar Grant III, Tamir Rice, Michael Brown, Eric Garner, and countless others didn’t have that privilege. Those members of minority communities who are often most victimized by police brutality can’t just leave their homes. Back in the bubble of my suburban existence, “home” meant verdant parks and quiet streets. Many persons of color learn—at my age or even younger—that “home” means something else entirely.

“Home” is not safe. “Home” follows you everywhere.

The truth is, “home” is larger than one “bad neighborhood,” one city, one state.

“Home” is the United States of America and the amalgamation of your interactions with individuals and institutions around you. And the fact that in 2014 your definition of home and how safe you feel in it differs depending on the color of your skin should be a wake-up call to all of us. On the night of Saturday, December 6th, I felt scared as hell. But I recognize that that fear was the lens through which so many members of minority communities targeted by police brutality view police forces every day.

I may have lost some of the childhood innocence that made me think of the police as the uncomplicated “good guys,” but Pandora’s Box had hope in it, too. On the night of December 6th there were countless small kindnesses: free milk and water was set out on the sidewalk next to a cardboard sign, “In case of tear gas.” Multitudes of people cared and checked in on each other, seeing if everyone was okay. People who were strangers minutes ago warned each other about oncoming tear gas and tried to keep each other safe. Even as finals are nearing, hundreds of students have continued to protest this week in marathon sessions, with numerous student and community organizations working hard to protect individuals and provide news coverage. Call me naïve, but I believe the solidarity expressed in the protests over this weekend can be channeled toward creating a world where the empathy we receive from our friends and neighbors is the empathy everyone receives from those sworn to protect us.